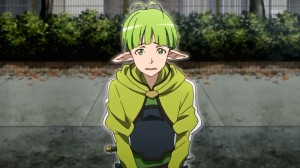 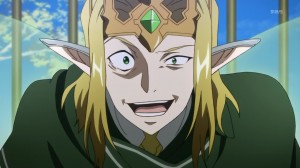 While normally I’d be happy that someone like Suguha has another option when things eventually don’t work out with Kirito…not really happening here. I mean no offence to Recon, but kind of feels like a sorry plan B. Like she can’t get with the main character so the kind of wimpy friend is her only choice. While he seems to be a good person, I’d just feel sorry for Suguha. While feels odd to discriminate against a nerdy guy…that’s probably what it is. Therefore, stop with your smirking Kirito. Stop trying to push them together just because after meeting Asuna you’re all Mr. Romance.

In regards to Asuna things are continuing to get creepy with Sugou. I mean does this guy actually think “hey she’s totally going to sleep with me if I keep this up?” At least Asuna finally got some positive developments like seeing the code. Of course she can’t escape this game and he’s got full control, but it’s something. Maybe if Asuna can get free she can help out somehow. At least she got the positive news that Kirito was alright and alive. Frankly, the last thing that Sugou managed to do was discourage Asuna. All he did was tell Asuna that he was alive and not trapped. He may have wanted to break her, but it was more relief than anything to find out the truth. Sugou might have the ability to marry her unconscious body, but he won’t freely gain her heart. 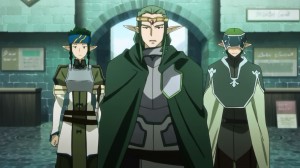 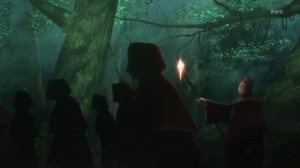 It is good to know that there are still plenty of jerks around despite the different game. Sigurd probably is connected to things somehow. Either that or Sigurd is just a jerk who likes to feel self-important. If someone joins up with you with the understanding that they stay or go as they please, don’t be shocked if they get up and leave at some point. Even if Kirito wasn’t the catalyst think Leafa is just too free-spirited to be chained down by that party forever. Of course, it wasn’t the most clean separation since now she can’t easily return to that town after her declaration. But really if Kirito manages to help save the day and change things then it really might not matter. She’s far more help to Kirito right now than she would be staying behind with Sigurd and company.

Doesn’t seem like this trip is going to be smooth sailing. A pretty large red group (I’m just calling them by colour for now) seems to have Kirito and Leafa tagged. Should be a real test for both of them if they get swarmed by that many enemies. But it’s the risks you take traveling out in the open in a game where PVP is encouraged to that degree. Just lucky that they weren’t attacked while doing that logging out to grab a bite to eat. Though it should have been easy enough to do just that. Therefore, I wonder if they are waiting for a particular moment to strike. 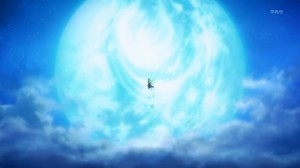 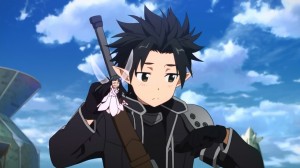 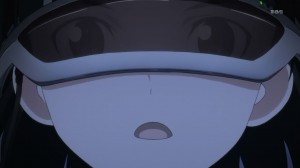 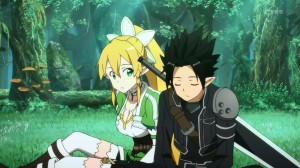 It was nice to get into Suguha’s head a bit and an explanation of why she’s playing this kind of game in the first place. After losing her brother in one, it makes sense a good amount of time was spent being angry about what happened to him. However, at the same time suppose it is plausible that she wanted to understand his point of view more. After that could see getting really absorbed with it having the ability to fly freely like that. Considering how she got into kendo, having something that Suguha chose herself might be liberating. Regardless of her motives for first starting, it’s clear this game has taken up an important part of Suguha’s life. Going as far as she wants and exploring a fresh and new world.

So far, it’s been pretty easy for Suguha and Kirito to dodge each other, though I wonder how long that can continue. They are playing for hours and just laying there the whole time. For now they don’t really have the time to deal with the truth. If Suguha believes Kirito is still depressed then she shouldn’t be pushing him too much for the moment. 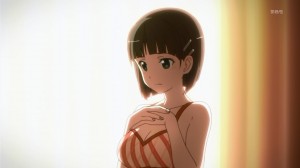 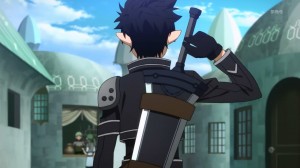 Suguha does seem to be the fanservice girl of the series for the moment. Just having her strip down and simply throw on a shirt before going into game mode. Seems a bit risky to me since you can’t actually interact with the real world until you log yourself out. After all that’s happened you’d think she might at least be worried about Kirito knocking and then checking in on her. But I guess she was more eager to just get the adventure started with Kirito.

At least now Kirito is geared up. He might have dumped his items, but even considering the money spent buying that home with Asuna he should still have had enough to get decent equips. It’s not nearly as good as the stuff he had before, but at least it is better than the default equipment. If he was able to one-shot players with that stuff then having an average weapon should be more than enough for the time being. Just wonder when his dual-wielding is going to come back into the series. That sword isn’t exactly suited for it XD. 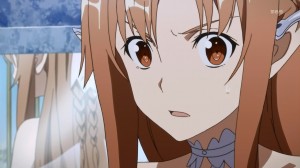 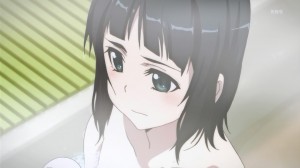 Overall, a pretty good episode from the series. Not too much action in this episode. It was more setting up the world, along with the relationships that are likely to be important going forward. Curious to see what kind of trouble Leafa and Kirito are going to get into, as they just keep moving ahead. They are low on time and can’t afford to be slowed down too much by minor opponents.
Score: A-