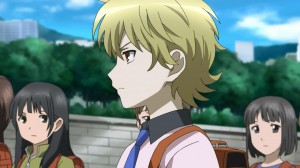 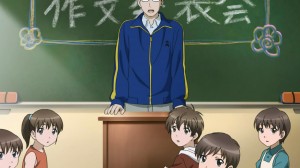 So this time we get to dive into the past of Yoshino and Mahiro. Certainly this is not the average way to create a long-lasting friendship. Fate and teachers being lazy played the biggest part in bringing these two together. I mean what kind of teacher imposes the job of hanging out with someone they can’t handle because they are scared of his father? Instead you stick some random kid with the job since you figure at least his family won’t get you fired over it? Either that or the teacher was just an idiot who seemed more than easily fooled into thinking those two were getting along.

Of course in the end Mahiro and Yoshino were problem kids of different types. Yoshino literally just faded into the background and managed to get by without making much of an impression along the way. Mahiro wasn’t the type to let people get close and his father being in a prominent position let him do pretty much whatever he wanted. You tell a kid that nothing bad can happen to him and trouble will usually be just around the corner. Of course he had qualities that would bring people to him if he wanted them to. Being talented in academics and sports would make him the star if he had the personality to match. Personally I never liked those types. Not their fault, but just having that much talent really annoyed me. 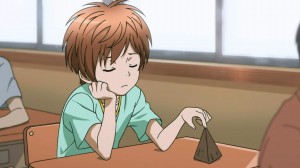 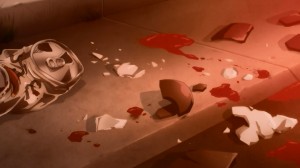 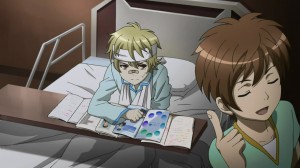 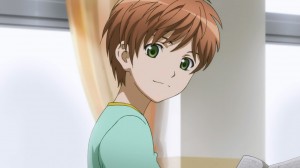 While it might not have been for good reasons, these two were pretty isolated in their own ways. Neither of them had friends and could use someone that they could rely on. Their abilities seemed to mesh well also with Yoshino being damn good at figuring out problems and Mahiro being a man of action. It’s jsut that their negative qualities made them not want much to do with each other. All it took was an attempted murder to get those two to spend some time with each other. They really didn’t mind putting each other into uncomfortable situations. Mahiro lying to the teacher to force Yoshino to help with his investigation and then Yoshino getting a twisted revenge in changing the story so the class would give Mahiro an uncomfortable level of attention. You’d never have guessed that kind of personality would be hiding behind Yoshino’s smile. Certainly makes what Aika said in the first episode accurate. Yoshino might look like the innocent type, but there’s a side of him that you can’t easily read.

I still can’t believe how over the top Yoshino went in order to investigate the crime. Like with his vegetables, Yoshino really tried to get the things he didn’t like out of the way quickly. But seems like he’s the type that goes all out when he gets involved so he couldn’t stop short of finding out who the mastermind behind the crime was. I mean that’s an incredible amount of work put in by a kid in elementary school. If he considered Mahiro to be smart then Yoshino must be on a genius level. Of course the crime itself was a pretty extreme one. Going after the kid and trying to make it out to be an accident just because he had a grudge against his father. Sadly, it’s not an unbelievable story considering the things that happen out there in the world. 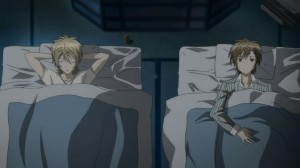 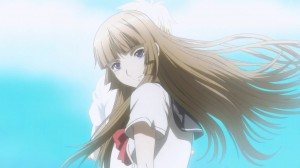 Despite the fact that neither originally wanted this friendship, they are certainly both better off for it. Neither could have come this far if they hadn’t met each other. Sticking with Mahiro might have taken Yoshino far, but it’s only because he could stick with him. Certainly worth a chuckle that even Mahiro felt the same. Of course it’s somewhat dangerous since if they hadn’t met each other maybe they wouldn’t have gotten into nearly as much trouble. Their ability to take on fifteen guys at once for example shows how the risks increase when the ability to handle trouble increases. Of course the big thing is that Yoshino wouldn’t have met and gotten involved with Aika if he hadn’t met Mahiro.

On that note it had to be frustrating that Mahiro just fell asleep. I think Yoshino was just about ready to start stepping into that uncomfortable topic. Though maybe they really can’t afford to talk about that until something terrible is going on. It’d just be too boring otherwise XD. 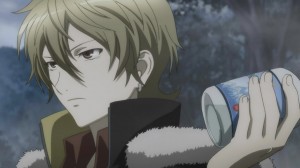 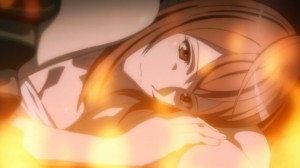 I kind of wonder how Hakaze views this unusual friendship. She must have suffered a lot of betrayal when she was thrown onto this island by herself. Might just be enjoying this interesting friendship or simply becoming more interested in these guys that she has to count on. These guys really are her only link to the outside world and of course the only ones she can talk to.

Those two boys hit by the syndrome really were a focal point. Neither Yoshino or Mahiro could really just leave them be. Even if the actions seemed meaningless, it meant something to the both of them. Two friends that couldn’t be saved from this situation. Mahiro might be able to focus heavily on his revenge, but it’s good to know his heart is still in there. 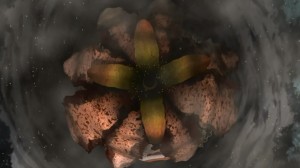 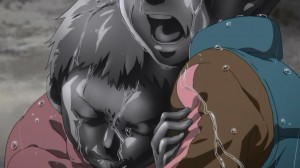 So this was a good flashback episode. It did a nice job giving us some context to Yoshino and Mahiro’s friendship and how it all got started. Neither appreciated it, but they certainly are good at working together. I’m curious to see where things go from here. Samon is clearly stepping up because he knows Hakaze is taking action. The guys can probably expect more guards around the fruit now that they know trouble is coming. Also wondering just when that hidden relationship might come to light.
Score: A-