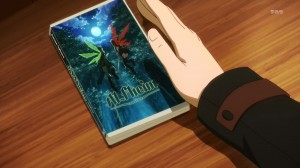 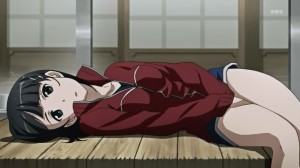 Ah, the relief of finally being back in the game world. One episode of RL was more than enough for this series XD. But really, it’s good to have Kirito back in the game and on a mission. He’s got to go and save Asuna and nothing is going to get in his way; that statement being especially true with his SAO stats and skills transferring over to this new game. I mean really no matter how hardcore a gamer someone might be they aren’t going to be able to match up to someone who has been leveling up skills for 2+ years and had their life on the line. Of course I’m sure it’s not going to be that easy, but at least Kirito doesn’t have to start from scratch on this.

I thought the one week deadline was way too short before seeing how Kirito’s skills would transfer. With this he can skip most of the game and just go straight to the high level content. Depending on how the story goes it should be more than possible to clear this in a week and live happily ever after. Well first they have to save Asuna and then punch that jerk in the face. Seems all the more likely that he conspired to transfer Asuna’s consciousness to this new game and then trap her there. Long as he keeps her there he can marry into her family and then just let her expire. Of course maybe he just intends to leave her there until marriage and then let her wake up, but considering she’d divorce him in a moment’s notice I doubt it. 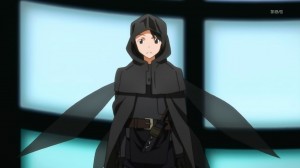 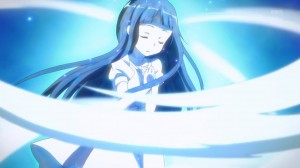 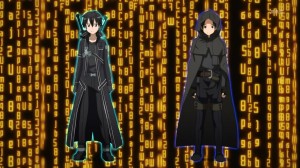 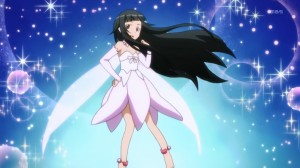 I had to laugh when Kirito picked his race. Of course he picks the one that is dressed in black. He probably didn’t look into much about the game other than what Agil told him. Luckily it all worked out fine and if there are some differences between the races it probably won’t affect Kirito too severely. This episode really managed to lighten the mood a little bit. You could feel the suffering as Kirito went and deleted his SAO items. I mean it’s not like he’ll actually need them again, but those items represent two years of suffering and accumulating. But the goal here is to save Asuna and he can’t do that if the game system or admins start chasing him down because it looks like his character was hacked.

I say welcome back to the series Yui. It is good to see the girl again and pretty funny having her be a navigation pixie. At least this version of Cardinal isn’t out to murder her. She can travel this game with Kirito and help look for Asuna. Sadly she can’t pull out any burning swords of death anymore, but her presence is more than good enough.

It is a bit hard to believe though that this part of the series can even happen. I mean around 4,000 people died in SAO. Games get enough harassment when some people do crazy things. In this case a game and system literally killed people. Even if you consider Kayaba a crazy terrorist, I just think the NervGears would have been recalled and the Virtual MMO would have been banned. Politics hammers on games enough anyways when they don’t do anything. Well I suppose if things happened like that we wouldn’t have this second part to the series. Plus, if you throw in governments hiding the truth and some conspiracies then it works out fine. Wouldn’t be beyond belief for a government to lie and cover this incident up so they wouldn’t be blamed for being unable to stop it or save the players. 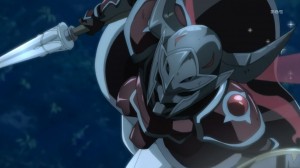 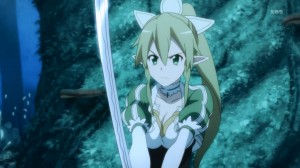 So now we go from a game based on melee weapons to a game with magic thrown into it. It does make things trickier since now ranged combat is actually possible. Flying just adds another dynamic to it as well. Saw a bit of the potential for aerial combat in this episode and I’m looking forward to some epic fights. Of course some of the best fights were boss battles so I’m not sure (magic or no magic) that player v. player combat will be nearly as exciting.

I have to give credit to Lyfa for taking down as many of those guys as she did. The girl was seriously outnumbered there, but held her ground and didn’t give it up even when things were looking bad. Of course this game doesn’t have nearly the same stakes since you simply have some death penalty rather than actually dying. Still, it can’t be easy to have that many people going at you with weapons even if you know that in reality you won’t be hurt. 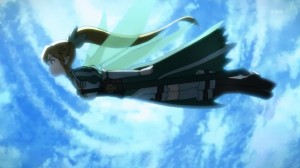 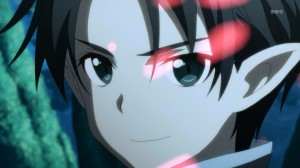 Well, this was a good way to get back into the action. Looks like Kirito’s journey to save Asuna will be an entertaining one. Luckily we don’t have to watch him grind up skills and can just see where the story will go. At least Kirito is keeping up his quota of helping out girls in trouble. Hopefully his fun of owning these ‘experienced’ players continues next week.
Score: A-