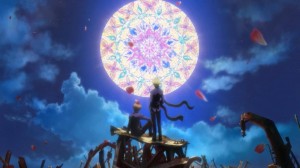 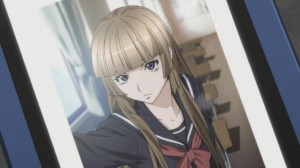 It took me a while to decide what I really wanted to go with for this Fall Season. Wait five minutes and I might end up changing my mind once again. Still this series stood out for me from the first episode. The combination of music, action, and story really made me want to see what would happen next week. Plus I can still remember enough of my English classes to recognize the Hamlet quotes being used here. For some reason that just adds an interesting spin to things. Certainly it’s a tragic situation for the leads of this series so it does certainly fit. Plus just makes me smile a bit to have these quotes being brought out and actually working for the scenes.

I’ll just start off with what really surprised me about this first episode. The fact that Aika turned out to be Yoshino’s girlfriend just completely shocked me. I bought into the girlfriend story and thought he was just being a good guy visiting the grave since Mahiro was missing. Instead it turned out that he was visiting the grave of his girlfriend which certainly isn’t a shocker. If Aika was trying to sell everyone on her not liking Yoshino I thought she succeeded. The flashbacks painted a picture about her being completely against this guy. But in reality she loved him and was going out with him. Maybe she got pissed because he was hurt and could have avoided it if he’d left Mahiro be XD. 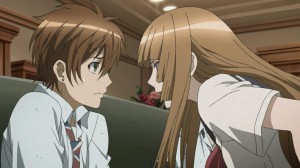 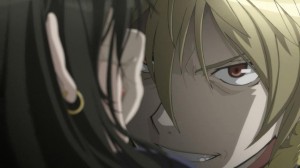 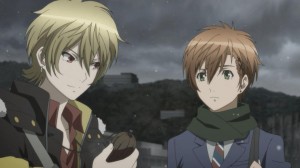 Aika might turn out to be one of my favorite dead characters. A kind of odd category, but she’s such a likable character and yet we know early on that she’s dead. I mean, well that just sucks. Of course her death is the source of so many actions in this series. If she hadn’t died then Mahiro wouldn’t have gone out looking for revenge and got involved with Hakaze. In that respect she saved their lives since otherwise they all would have died from that black iron syndrome. Though good luck convincing anyone that’s something to be grateful for. Her death was clearly a painful blow for those closest to her and their lives have spiraled into a very different direction because of it. I do wonder why she was so adamant about pretending she hated Yoshino. Even after her death Mahiro completely believed that Yoshino and Aika didn’t like each other at all and that Yoshino is seeing someone…that’s alive. Possibly related to the fact that Mahiro is the type of guy that would go on a revenge driven rampage to avenge her…

As to the main guys, I’m pretty happy with the both of them. Mahiro is a ton of fun, just driven towards his goal. The guy is just on a mission and will kick the ass of anything or anyone that gets in his way. How many people can say they will save the world as a side effect of getting revenge? It’s a secondary objective for him and he doesn’t hide it. Plus he doesn’t take crap from people trying to shoot him. Just smashing Yamamoto into the ground to knock her out. For some reason I can just appreciate the honesty behind this guy, even if it’s somewhat frightening. He is pissed and will kill the guy who murdered Aika.

On the other hand Yoshino is something else. He has just as much reason to be angry about Aika’s death, but he just looks…drained. It’s like he can’t even get angry about it. He just looked so empty when facing those five guys who picked a fight with him. If he was with Mahiro taking on three times that many wouldn’t matter, but alone he just doesn’t have it in him. Plus there isn’t any Aika to scold him about it later either. Ironic that it takes a crazy fight and a magical effect that turns people into metal to get him to really get going. I’m curious to find out more about this guy and just where his character goes. 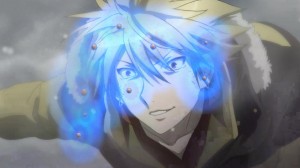 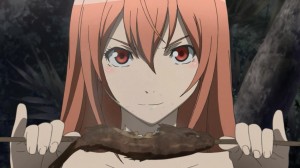 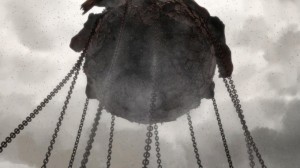 Hakaze is quite the character herself. Certainly powerful enough that Samon went that far to remove her from the equation. Exiling her to some island in the middle of nowhere and then hiding said island with magic. I suppose he had reason to be worried considering she managed to actually create a way to contact the outside world.

Of course the action was plenty of fun in this episode. The magic is just interesting to watch in action with Mahiro flying around and even blocking a shotgun blast at close range. If the action stays at that level then it shouldn’t be a problem to keep enjoying things.

As to the story quite a bit of setting up was going on here. While I feel bad for her, Hakaze sure managed to remain entertaining even after getting dumped on a desert island. The most powerful mage out there and yet she can’t take action beyond throwing a few dolls out to sea and hoping someone would find them. Be it fate, luck, or whatever she found a decent guy in Mahiro. He’ll do whatever it takes if she can help him find the guy responsible for Aika’s death. With people turning to metal and giant…things popping out of the sea, we shouldn’t be short of spectacles in this series.

OP [Spirit Inspiration] by Nothing’s Carved In Stone: (B) 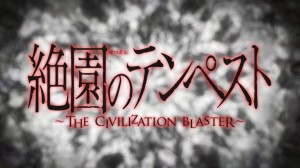 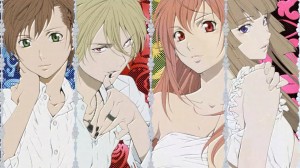 I kind of enjoyed the OP simply because of the Engrish. Though to be fair the words were pretty well pronounced. In some ways the lyrics made sense and in others it was just kind of funny. They really seemed to try and match the pauses in the lyrics to the swapping of scenes which wasn’t bad. Won’t say it’s my favorite OP of the season, but it’s ok. It’s got enough energy that you want when starting an episode for this kind of series. Think visually it covers what this series will contain in terms of action and showing off the various characters who should be important goin forward. 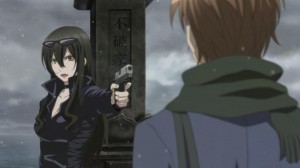 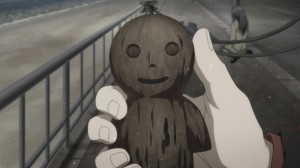 Well now I’ll just try to catch up on the other episodes so I can officially get going with this series. The way I see it, action series usually manage to keep my attention and this show should have plenty of that. Besides I’m just curious to find out who killed Aika and why. Can’t imagine her death was just coincidental with how it sent so much into motion.
Score: B+