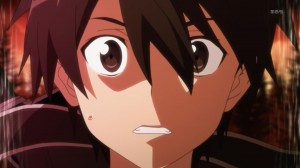 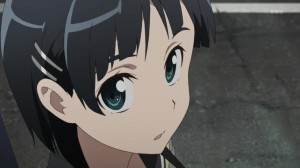 Somehow I think it was a good idea to skip the new OP/ED until after I watched this episode. It certainly answered my question as to what the heck this show is going to focus on. Funny enough they pretty much skipped over all the rehab stuff XD. Either they didn’t care to really represent how slow their recovery would have been or the medical technology really is just that good. Well, I suppose a third possibility is somehow they powered their bodies up while fighting like crazy in that world, but that might be stretching reality a bit. Either way they definitely created some new stakes and gave a direction for the series to go.

At least the concern about the lack of action is nothing to worry about. Sooner or later we’ll be right back into the fray. Also the series is giving a pretty serious time limit for this. They won’t have two years this time to clear….well whatever is going to happen. Asuna has remained in the same state for all this time and has to be reaching her limit, along with everyone else who wasn’t released from the game. I’ll just say right now, Kayaba you suck at what you do. Bad enough to be a crazy guy with a god complex, but he can’t even program his own game properly? I had assurances that everyone was getting logged out and yet, I don’t see everyone logged out. Geniuses….never good for anything XD. Sorry to all geniuses reading this. 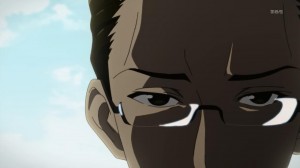 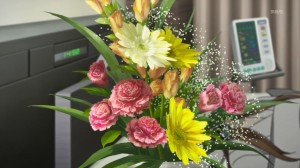 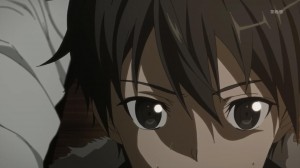 So yeah, the big thing is that Asuna and about 300 players are still not awake. Even though Kayaba was taken down some people didn’t get out. It could certainly be worse, but it’s not good either. They don’t know what is going on at this point and now there isn’t any guarantee that they will wake up since as far as we know there is nothing for them to ‘clear.’ This almost turns them into regular coma patients that you hope will wake up, but aren’t really sure it will ever happen. I probably should have seen this coming since the universe just loves making Kirito suffer. Of course he couldn’t wake up and simply meet up with Asuna again. It’s got to be some sort of problematic event that will separate them. At least she is still alive which is better than the people who were killed while involved with the SAO incident.

But even though Kirito is down the universe isn’t happy enough with that. Instead they have to insert some creepy piece of crap that is after Asuna. I mean seriously, it’s just creepy as hell. Sure, Asuna is 17 and thus can get married in Japan, but this guy is what in his mid twenties or something? I don’t care how close he is with that guy’s father, Asuna’s dad should have some semblance of respect for his daughter. Using her as some marriage tool while she’s in this unconscious state. He may not know that she hates the jerk, but he could at least wait until she wakes up. Her dad doesn’t seem like a bad guy, but he clearly isn’t that smart either. I mean this guy that spent the last two years with your daughter in that game is constantly visiting and you don’t think anything about it? It’s not at all possible that they are in a relationship?

Of course maybe it’s not just Asuna’s father. I wonder how many people in the real world don’t understand that htese people have not been doing nothing for two years. They were not sleeping this whole time, they were living and fighting for their lives. Suguha is kind of a perfect example. The girl looked really stumped/surprised at Kirito being able to fight that well with a sword. He’s fought against a whole lot scarier things a kendo match these past two years. I suppose it is hard for people to wrap their heads around. Either they don’t understand that these people are fully conscious or just shrug it off as being inside a game world. It doesn’t matter how artificial it is when the monsters can really kill you. 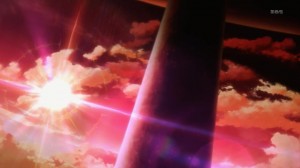 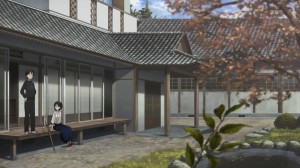 I can only imagine how it’s been for the people who have come back to the real world. Having to have people treat them like they are coma patients that just woke up. For the players they have just been in a different world, that’s it. It may not be a big deal in the bigger picture of things, but that’s the difficulty. The world kept on spinning and now they have to find a place in it again. They have picked up skills that generally don’t have super effective uses back in normal life. At least though they should have gained a few things during this mess. An appreciation for life and death. Plus they really shouldn’t be as easily intimidated anymore.

Coming back to the real world I was hoping for more aftermath. Kind of curious what happened to the PKs. Would be nice to think those people got what was coming to them after everything they did, but hard to say. At least the majority of people got out of that game. 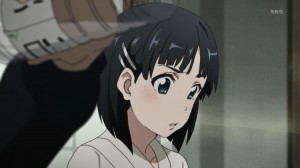 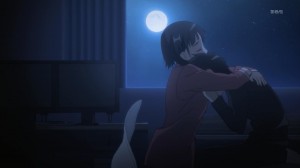 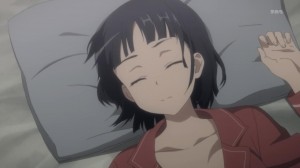 Of course the big introduction for this episode was for Suguha. I’ll say it was hard to really get invested in her romantic plot line. We knew from the Silica episode that she isn’t actually Kirito’s sister, but seems kind of random to insert this kind of thing now. Plus I just find it hard to buy into. If someone told me tomorrow that one of my sisters was adopted I really wouldn’t care. It wouldn’t change a thing for me. Still family, and still the person I grew up with for years. I’m just not sure how it should change things for Suguha to learn part way during Kirito’s struggles that they were cousins. Oh well, just chalk me up as someone who just can’t buy these not-related by blood sibling relationships. Maybe if you grew up knowing that, but considering someone to be a sibling and then suddenly falling in love with them is beyond me. So yeah, if her unrequited feelings remain a focus that could be tough.

I’m sorry for her, but clearly Kirito doesn’t consider her to be anything but his sister. He’s known for years and it never changed anything for him. Even if Asuna and Kirito never met it wouldn’t have changed anything. It’s a tough road to go on, but Suguha is just going to have to get through it. She’s always going to be his little sister and that’s all. She’s right in that she has to stop lying to herself. First facing her feelings is important and then just dealing with it. Lisbeth had to deal with that fact and she at least had a more legitimate hope of catching Kirito’s eye. So yeah, trust me when I do feel sorry for Suguha in this position. I may not really be able to understand it, but her pained feelings are still easy to read.

Clearly the girl is going to have some importance to the story ahead. Kirito’s mom only appeared in a flashback, while his sister was the most prominent character outside of Kirito himself in this episode. I’ll say right now that overall I like her character. Girl is a badass who clearly has put in the time and effort to become damn good at kendo. She’s also cute and a supportive sister which is always a plus. Don’t want to let her relationship with Kirito be everything about her character, overall very impressed with her. 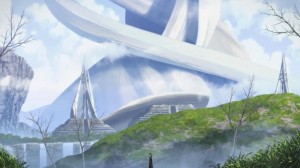 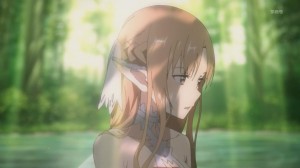 Though I’ll say right now the elf ears are really going to be annoying. I have nothing against elf characters, but that whole OP it really felt jarring. At least in the SAO portion of the story they all still looked human. The pointed ears are just really standing out. So that is the first thing about the OP that really got to me. I’ll have some adapting to do when it comes to the faerie ears and wings.

I’ll just start off with the story implications since that just jumps out most. Looks like the real world and new game world are going to get some focus this time. I don’t think Kirito is going to get trapped in anything, but just spending as much time as he has to in order to save Asuna. Really I don’t know how this is going to work. She can’t leave, but the rest of the players can? Well whatever, obviously his sister Suguha is going to step forward for this part of the story. Certainly has real world skill so hopefully that will transfer pretty effectively. Also seems like magic is back in for this. Makes sense since this is a faerie world and not just swords based.

The music was pretty good. I’m a bit more partial to the first OP, but this was pretty good. Helps set the tone for this second half and is plenty full of energy. The visuals look sharp and gives you a good picture of what we are getting into. All in all, a very good OP that I’ll be happy to watch each week just like the first one. 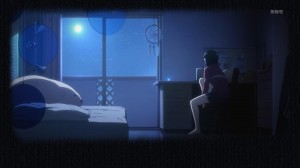 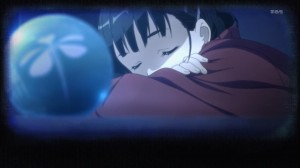 I’ll say that I actually like this ED overall more than the first one. That song just never really grew on me while I feel like this one will. It’s a song that does seem to reflect Suguha and her situation. All those feelings and memories towards Kirito, both the sisterly ones and the ones of a romantic nature. The girl is clearly struggling and it certainly pulls you in. So yeah I like the song and the visuals were pretty nice. While the song’s tone isn’t too positive, I’m left with a good impression of it. 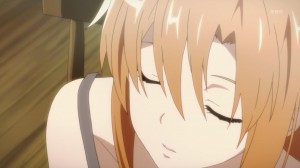 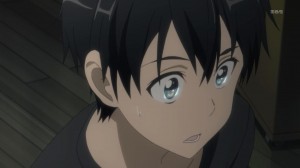 So they have one week to save Asuna. That’s a pretty tight schedule. I mean sure it won’t really matter if she gets married since she can wake up and annul it. But frankly I don’t want that creepy piece of….well you know, to even have a reason to touch Asuna. Great, now I’m convinced that jerk has been feeling her up while in the game for the past two years. I really want Kirito to pull a knife on him and show that guy some real world sword skills. Reality and SAO are the same in one respect, you kill someone and they are dead. Bring on next week I say.
Score: A-