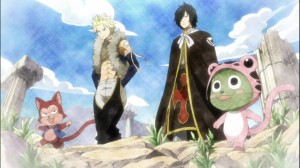 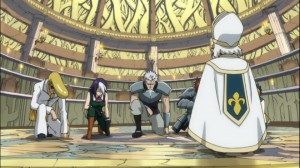 Finally, with the latest episode Fairy Tail has officially made it back into manga cannon. I think as someone rightly pointed out in the comments of the last post that’s covered Fairy Tail, the filler arc has been the longest anime arc to date, trumping stuff like the Edolas arc and the Tenroujima arc. I wish I could say that that arc was any sort of accomplishment, but that would be a praise waaay too high for a story that was steeped in cliche and mediocrity. 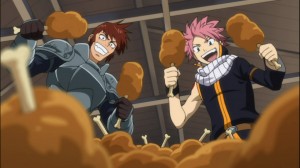 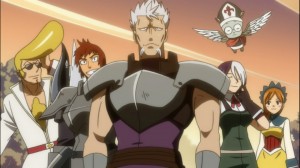 Unfortunately, since even half of this episode was part of the last filler arc, I can’t go on “pretending” that Fairy Tail was on break till this latest episode. I think the most difficult aspect of the filler arc is the fact that its just mediocre. Its not horrible, because as any seasoned vetern of shounen anime watching will tell you, there are filler arcs that are much much worse. While this filler arc did not approach the audacity of Bleach’s bounto arc or the 2 year long fillers from Naruto’s original series, it was still a huge insult to the marvel of Fairy Tail’s expert storytelling and characters. I’ve covered at length why this filler arc has sucked, given very specific examples in previous posts, so I won’t waste anymore time on that.

One thing though… Gotta love Zenetopia. The Archbishop or whatever was just awesome in this scene: 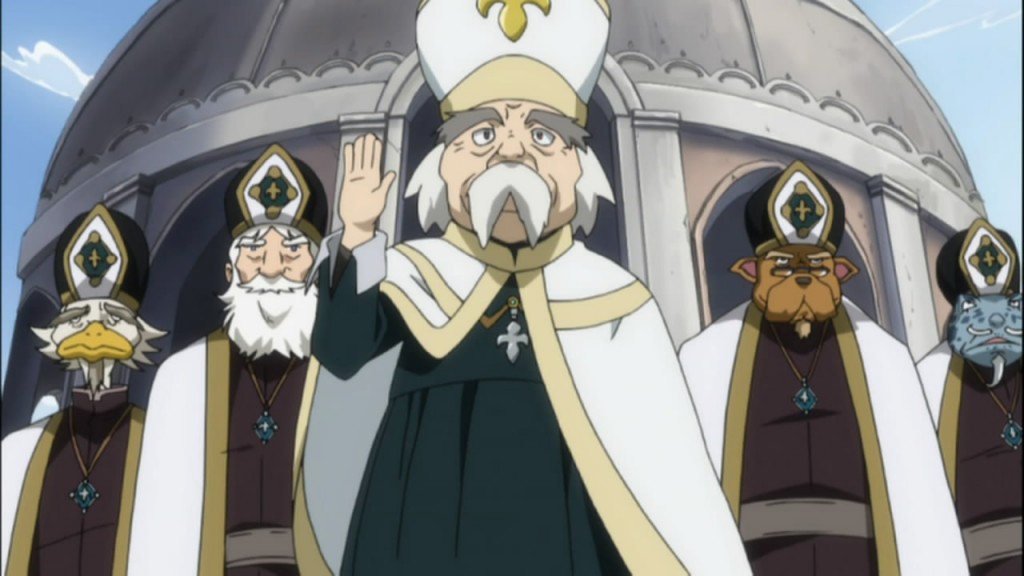 Ahem! Lets just say I’m glad its over, and now we can go back to a world where stuff revolving around Fairy Tail is actually exciting. So in the second half of the episode, some really interesting developments happened.

The first one, was Makarov and Gildarts’ treck to the basement of Fairy Tail. Gildarts learned of the “true nature” of Fairy Tail, which had been recorded by Mavis, and which Makarov was now showing to Gildarts. Why? Because Gildarts is going to be the new Guild master of Fairy Tail of course! 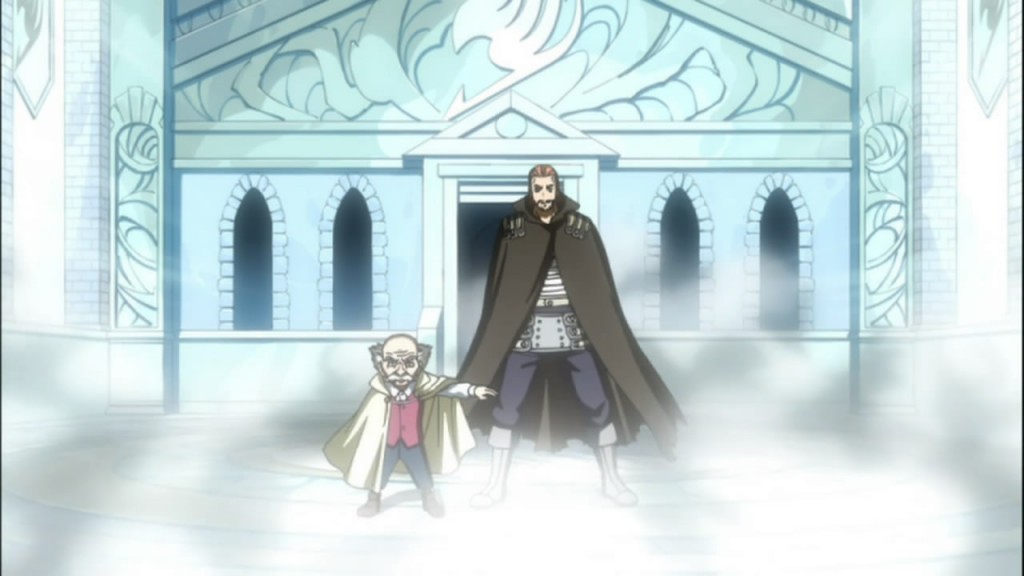 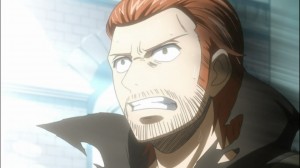 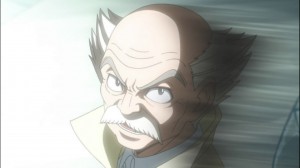 It was just one quick scene, but man are the implications for that scene far and widespread. For one thing, this signals a major change for the guild, as Makarov is indeed stepping down. It also means that Fairy Tail will always have a major power there, protecting it and guiding it. I think ever since the S-Class exam, when Gildarts properly raised and cultivated Natsu, teaching the kid fear and how to deal with it, Gildarts cemented himself as both a teacher and a parent.

I have no issues whatsoever with Gildarts taking over the role of Guildmaster, especially since while Laxus has improved, many would argue he isn’t quite ready for such a huge responsibility.

Of course, more importantly, I think everyone who watched that scene is curious about what the true nature of Fairy Tail is, and why Gildarts was so shocked. I’m tempted to guess and say that what the nature is, it isn’t holy good or positive. Especially since we had someone like Purehito run Fairy Tail for a good while and then head over to the dark side. Purehito comments during the Grimoire Heart battle were also interesting, since he commented on how “Makarov had made Fairy Tail” something different, or something along those lines.

Either way, I’m glad there’s more mysteries and secrets behind Fairy Tail. We also got a slightly small update on Zeref, or rather the fact that he and Arcnologia disappeared. Given how badly Fairy Tail was crushed with its arguably strongest members at the helm, its a stroke of luck for the rest of the world that Arcnologia hasn’t decided to trample everything in its path.

We of course, learn this from Lahar. If you forgot about Lahar, he’s the jackass that decided to not tell his grief stricken buddy Dragonbalt about the fact that Fairy Tail was alive. I love how no one in the show cares about how much a douche’ Lahar is, even Dragonbalt himself: 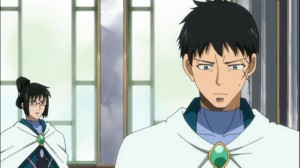 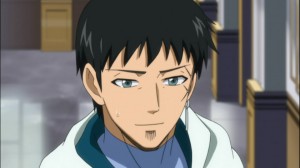 Yeaaah, anyway… The other major thing we learn is about the current top guild in the world. Lo and behold, its a new guild called “Sabertooth” that’s risen to power in the seven years that Natsu and co have been asleep. What’s of course, the truly interesting part is that the new guild has its own two Dragon Slayers; Rogue and Sting. These two are characters that actually were inspired by and looked up to Gajeel and Natsu. One of them is a Metal Dragon Slayer like Gajeel it seems, and one looks like  the love child of Midnight and Zeref. Said Love child is also pretty darn emo and silent, since you know, anyone with black hair is immediately emo XD 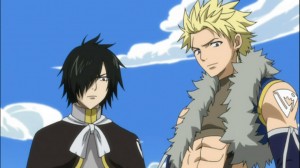 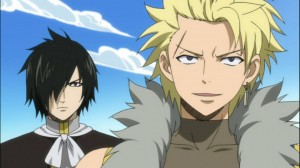 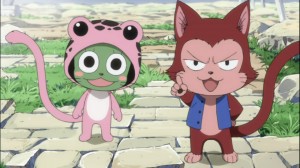 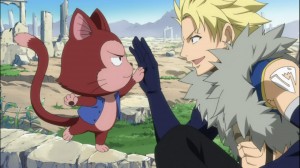 Jokes aside, the new characters even have their own Exceed? Rechter and Froche… Possibly Exceed now that I think about it. Its not wholly clear if those two creatures that accompany the new Dragon Slayers are Exceed. Either way, more mascot-level characters/opponents for Happy. Carla and Lily is more awesome in my book.

And as the current setup seems to be pointing to, there’s a new Mage Tournament about to happen, to rank all the guilds. A perfect way for Fairy Tail to go head to head with this new Guild, as well as get that 7 year old rust off XD

I can definitely say that while the first half of the episode still had the lingering smell of the last filler arc, we’re finally back into exciting times. Here’s to an epic new arc and more fun times. 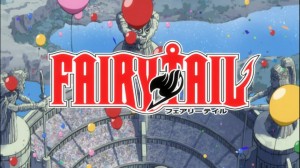 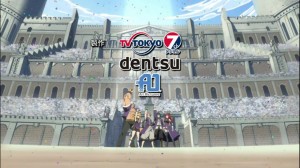 With a new arc comes a new OP. I’ll say that this is one of those Anime Openings that I think is fine. Its not AMAZING, but its all not even remotely close to bad. Its the happy go lucky cheery stuff that Fairy Tail does every now and then. While I myself am a fan of the more epic OPs like “Evidence” or “Towa no Kizuna “, this one gets the job done.

The animation though? Wow a lot of interesting tidbits to wet the appetites of starved fans who’ve endured a filler. We get an idea of how teams are going to be looking in the Mage Tournament (or Magic Games). I’ll save my comments for plot related stuff mostly for the future, but one thing that was super great to see was Mavis!

I’m pretty stoked to see that she’s still hanging around, and may be a good part of the series. Either way not bad OP, great animation and no major spoilers. 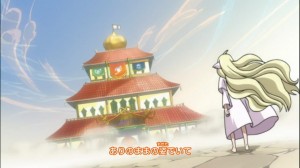 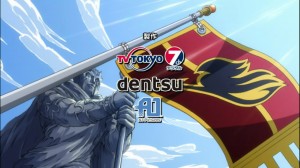 Much like the new OP, this new ED didn’t light me on fire. I feel like Fairy Tail should just give exclusive ED rights to Lisa, since she/they do an amzing job of dreamy and memorably EDs. That said, the animation was entirely Mavis focused, which is pretty darn awesome. The founding loli of Fairy Tail is definitely going to be playing a bigger role in the series, and that just makes me quite excited. All in all not bad, loved the animation more than the actual song though. 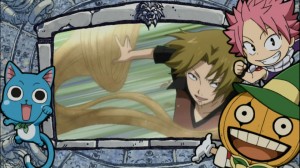 The Magic games begin soon, which means Natsu and co have got to get ready and do some good old training. Here’s to next week, regular reviews and a return to form for Fairy Tail!