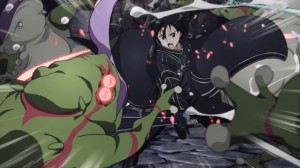 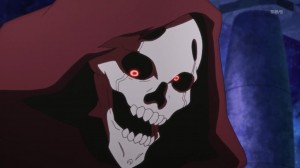 Well that was an episode that had me rather nervous for a while there. I really thought we had another Sachi incident on our hands near the end there. That girl steps up and saves the day only to be killed because of it? That would have been the worst kind of way to walk away from this episode.

This episode didn’t have too many surprises in store other than that super boss who’s strength I can only guess about. It was a pretty enjoyable episode though watching Kirito being so happy about fighting mobs of enemies. Clearly the one bit of fun he didn’t get to have on his honeymoon with Asuna to that point was fighting. I mean sure they wanted a break from the front lines, but this guy has been grinding solo for two years. You just can’t keep that up unless you are a little big addicted or have that kind of personality. Either way I just had to laugh when he brought forward all the frog meat and practically said “now cook!” Clearly there’s a lot of things that Asuna will cook in SAO, but frog is not one of them. 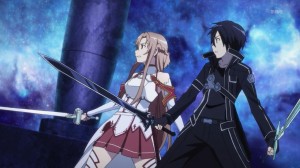 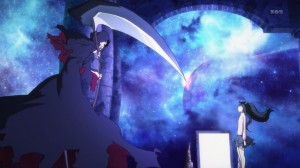 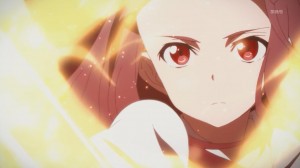 But wow that was some boss they ran into. Of course after I stopped to think about it, seeing that kind of boss wasn’t too surprising. Plenty of times in an RPG you’ll find a secret boss like that. Any dungeon that’s directly connected to the starting area must have something rather dangerous inside of it. But yeah that thing really would have been a grim reaper for Kirito and Asuna. Kirito couldn’t even guess at the level of that thing since it was beyond his scanning skill’s ability. For someone like Kirito who needs to know the strength of the enemy he’s fighting that must mean it was insanely strong. Even just purely guarding they were knocked down to half health. Another shot by that boss and they would have been dead, just like that.

The hero of the hour goes to Yui. It was just nuts watching her tank the boss’s attack and then taking it out. When a small girl just summons a massive burning sword that’s a pretty memorable moment in my book XD. She just took that thing out and that was the end of that guy. He made one key mistake and that was taking on a little girl XD. 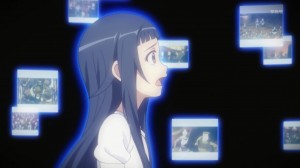 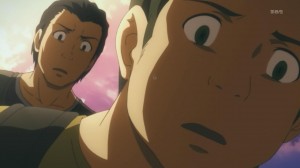 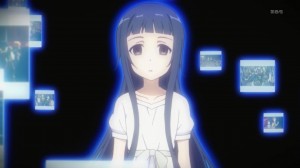 In the end was pretty much right about Yui. Thought she was some sort of AI, but didn’t think she was one of the programs in the game from the start. It makes sense rationally to have a program out there for counseling. Even if it’s a normal game this level of immersion might mess with people and having a calming voice can never hurt. Especially when it turned into a death game her ability would be even more precious. But it seems like the system didn’t want to make things easier on the players. This might hint that Kayaba’s motives really were malicious. Instead of giving those people on the edge any sort of comfort he held Yui back and let the players break down. Apparently a few people committing suicide, going insane, or stressing to the breaking point is just fine in terms of the game’s overall balance.

I can only imagine how terrible it would be for Yui. To comfort people she needs a certain level of empathy and therefore had to just sit there watching people in agony. Just surrounded with images of people crying out in despair or killing others because they don’t believe in the consequences. She had to sit there and take it unable to reach out and comfort those people that need it most. No wonder her program began to have serious problems. It’s completely contradictory to have her empathize with people and then tell her that she can’t help. It was just too much to endure. 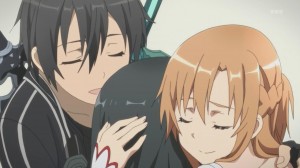 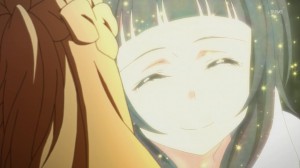 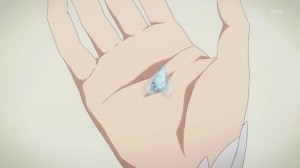 In the end that soul just wanted to reach out to two people who seemed to find some happiness despite their situation. Now I can’t believe that Asuna and Kirito are the only happy people in SAO, but for the sake of the plot let’s assume they are the happiest at that point XD. She finally got to go out and talk to people, though her memories were messed up to start things off. At least she found herself in the end and just in time to save Asuna and Kirito from getting killed. Two people who took her in and treated her like she was their kid. It had to hurt though to realize that she wasn’t a player like them and that she would be deleted for her actions.

I was pretty worried that they would kill her off. Thanks to the Sachi incident, I’m not able to discount much of anything outside of Kirito’s chance of living through any given episode. The story can’t kill him, but it can sure kill anyone he cares about in order to torture him a little. Thanks to his quick thinking though he managed to save her even if it was only in item form. Thought they might take her to the familiar revival level, but suppose that doesn’t quite apply. At least she still exists and maybe they can figure something out. I’m not sure what they can do with her program even after they get out, but maybe Kirito can figure out something. Even if she can only exist in some virtual plane on a computer it’s better than her dying outright. I’ll say good play by the series giving me a scare there, but at least Yui made it out alive.

Of course she couldn’t just stay as she was. Someone that can’t be hurt would pretty much be an anti-boss shield and they would waltz their way to the end of the game. Even though she wasn’t around for long I’ll certainly miss Yui. I liked her a lot more in this episode where her personality seemed to really start forming and she matured in a hurry. By the end I really got attached since she had such a pure personality. The wish to be with Kirito and Asuna forever even though in reality they would have to leave the game eventually. At least this way it’s almost easier and avoiding a serious dilemma where they wouldn’t want to leave her behind. Now as an item they can take her along and find a way to keep her with them in the real world. Of course this isn’t Star Trek so they can’t just turn her into a hologram, but it could be worse. But anyways, thanks for stopping by Yui. 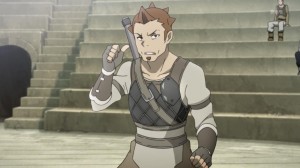 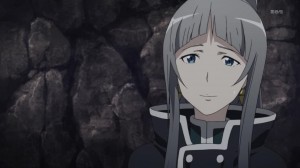 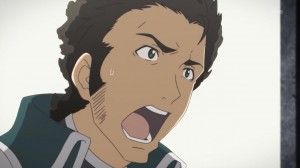 I guess this signals the end of Kirito’s honeymoon. They saved the real leader of the Front which was a relief. I can’t believe that jerk Kibaou is actually still alive. It figures that idiot would turn a good group like the Front into a bunch of thugs. He probably has them hunting down beta testers so he can shake them for items. He’s the worst kind of person for a guild that is to share items and keep people safe. He just wants to keep himself safe and secure, while at the same time blaming others for his trouble. That idiot even sent that reckless guy Kovats to the front lines probably telling them not to come back until they’d beaten a boss. Well I just hope that nearly dying will have convinced Thinker to toughen up and put Kibaou in his place. If that guy isn’t kicked out the guild then Thinker really should lose it.

But now I think Kirito has to move back to the front lines. I’m thankful he stuck with his usual attire since that white outfit just really looked bad on him XD. After seeing Yui’s sacrifice can they really just relax in their little house on the 22nd floor? They’ve got to beat this game if they want to get Yui out and find a way to interact with her again. If anything this encounter should have fired them both up to clear this game no matter what. I hate that Heathcliff ends up being right, but they are definitely going to be back. Of course they could always take a few more days off, but I wouldn’t be surprised if they immediately went on back. 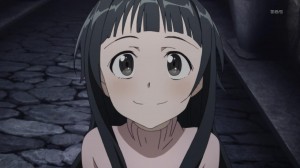 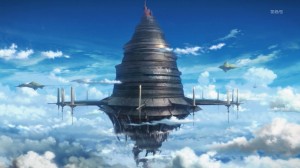 I have to say that was definitely a solid episode. While I thought Yui would stay prominent for longer, this wasn’t a bad way to handle her character. Also in a sense she’ll always be in the series, just as Asuna’s necklace. I’m glad we got some answers and looking forward to next week.
Score: A