If there was ever a series that was hard to pin to down, hard to love but also hard to really hate, it’s Summer 2012’s Josei slice of life, supernatural, romance show, Natsuyuki Rendezvous. The Josei genre is definitely home to some really deep, emotional and mature shows, with the likes of stuff like NANA at the forefront and smaller, cuter series like Kuragehime in the back. With that said, Its actually quite difficult to place Natsuyuki Rendezvous in a particular category. What can be said is that Natsuyuki Rendezvous is a series that will send you through a wringer of emotions. These will range from pleasant to exciting and cover the other side of the spectrum with tear jerking sadness and even deep frustration. The series is an odd, unpredictable beast. Just when it seems like you’ve got a handle on what its about, it takes a sharp turn, never truly falling in line with expectations. The result is something truly different, that will definitely incite all types of emotions, opinions and feelings. 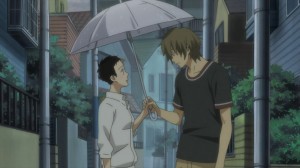 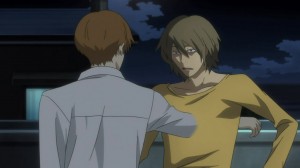 The basic premise of Natsuyuki Rendezvous is quite a novel one. A young guy named Hazuki falls for the owner of a flower shop where he works part time, an older woman named Rokka. While Hazuki is trying to get close to her, something rather unexpected happens. He ends up being able to see the ghost of Rokka’s dead husband Shimao, who seems to be beside his wife even after death, unbeknownst to her. From there on, an interesting love triangle of sorts forms between the three, encapsulating not only the idea of love, moving on, of life and death, but also the hypothetical question of how a dead person would view the world of the living.

The basic premise, gleaned from the first episode, is easy to call a winner. Interestingly though, contrary to what possibly every viewer is lead to believe, Hazuki is hardly the main character of the series. If anything, Hazuki seems to get shafted for the majority of the series while Shimao gets what is arguably the story’s focus and the central character arc. Its an odd choice for sure, especially given the fact that Shimao is a childish, immature and often time selfish person. Its worth noting that there are good reasons for this. Shimao is compelled to act the way he does because of his deep love of his wife coupled with a life riddled with weakness and disease. Yet it will definitely feel like a sort of missed opportunity to not focus on Hazuki rather than Shimao. With that said, while he’s not the most likeable character in the series, the series does succeed in making viewers empathize with Shimao by the end. Yet, much like how many viewers will probably be wanting to have Hazuki take a central role in the series, or have things progress a bit more quickly, the series refuses to give the viewer what they probably want the most, on multiple levels. 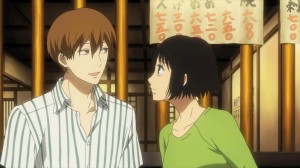 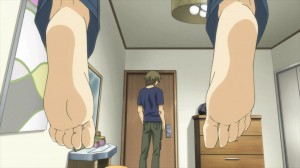 Its easy to say that the second act, the middle part of the series that develops to the eventual climax, feels too long. This is mostly due to how events are laid out. While it makes sense, does wonders for character development even, it does leave the audience frustrated, confused, and wishing for a quicker resolution. During this time of frustration, anticipation and wonder though, the viewer is treated to some really wondrous heart felt moments, some great comedy, and some really deep philosophical reflections by the characters. Its hard to say its a fun ride, but its would be a crime to not call it engaging.

There are many moments throughout the show, when the viewer will probably be compelled to want to wrestle control of the story from the series. And yet, if there’s one thing that the series does well, it’s transmitting that sense of helplessness that the characters experience to the audience. This is largely done by literally putting the audience through a parallel situation to the one Shimao, Hazuki and Rokka find themselves in. 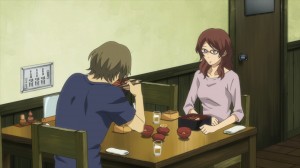 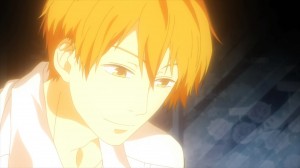 A daring move for sure. The success of an approach like that really depends on how definitive the ending is. Sadly, the ending, while decent or even good, doesn’t feel satisfying or complete enough to justify the harsh journey taken to get there.

To elaborate; Just as everything seems to be coming to a close in the eleventh and final episode, the ending kind of renders the journey of one of its main characters almost completely moot. The story actually resolves the conflicts of most of the characters, while Shimao’s end fate is largely left up to imagination. The ending can be called a happy one. Quite a tricky thing to pull off given the direction things had been proceeding in prior to that point. At the same time, while the ending may be “happy” it does not feel resolved or satisfyingly complete. Again, Natsuyuki Rendezvous refuses to give its audience something it clearly wants at that point, a proper conclusive ending to all the characters’ stories. 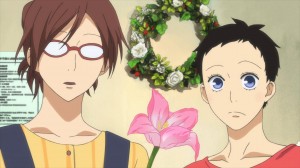 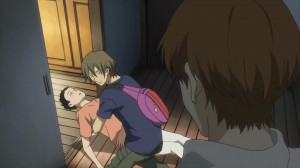 Its hard to say whether the series could have approached things differently, as it would probably lose its sense of identity. The frustation and dissapointment that one feels is like a metaphor used to make the audience empathize and sympathize with its characters. The show, for the most part, keeps up the rather delicate balancing act of frustration and entertainment up to the last moment, where it finally trips up and ends up shooting itself in the foot.

And while the story winds up being just short of amazing, the characters in the show, primarily the central three, do not. Each of the three characters are expertly developed. While events don’t play out in a very favorable way, the characters develop, evolve and stay true to themselves to the end. All three characters are likeable, if at sometimes, much like real people, a bit frustrating to watch. Yet, its easy to say that by the end, no one’s really a bad guy, a loser or irredeemable. Its a testament to the great writing, that despite the rather frustrating collection of events, the characters shine and remain engaging throughout. 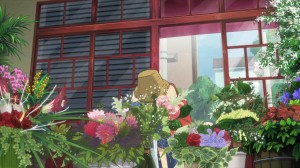 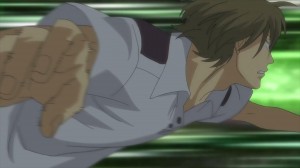 And truly, while the series isn’t a visual masterpiece nor does it feature an amazing OST, the production values for the show are consistent, and pretty well done. This is a series that has a distinct art direction that embodies the spirit of greenery, outdoors, sunlight and flowers. The character design are pretty typical for stories in the jpsei genre, and do a great job of giving the show a mature feel. The music, again, is pretty well done and competent, while not altogether extremely memorable.

It is worth noting that, the seiyuu do an amazing job with their characters, breathing some serious life and believability to some truly nuanced and complex characters. While at this point, its hard to argue that rarely any voice acting done in the land of the rising sun is bad, it still doesn’t underscore the fact that the seiyuu carry the show through what is essentially a series of two character interaction scenes. Jun Fukuyama, in particular, does an amazing job of voicing Shimao, who is both the central character of the series, but also a very trouble and nuanced one at that. 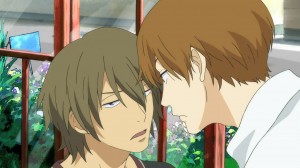 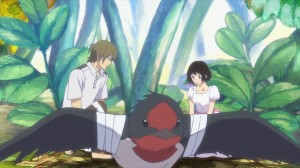 In the end, your opinion and enjoyment of Natsuyuki Rendezvous will exist, but it won’t be pure “fun”. While the series has enjoyment in spades, throwing a wealth of different emotions at you, it never fails to engage nonetheless . Natsuyuki Rendezvous is a great series, that does a lot of things right, uniquely and constantly plays with your expectations in a clever manner. Despite all of that, however, it never truly comes together in the end, falling just a bit short of being amazing. We award the series a B+ grade.