Kyoto Animation,(or KyoAni for short) is a studio known by serious anime enthusiasts, fans and otaku alike for producing amazing anime series. Its hard to reference the big changes in the anime landscape without mentioning good old Kyoani, who have produced amazing series such as AIR, Clannad, Full Metal Panic (Fumuffou and The Second Raid), The Melancholy of Suzumiya Haruhi and of course, the moe boom blockbuster K-On! 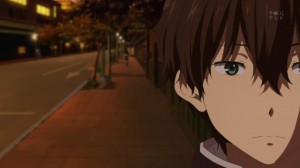 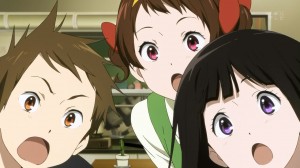 For fans of Kyoani’s earlier (and arguably more prolific) work, the current direction that the studio and its talent seems to have been veering toward has been a bit of a disappointment, to say the least. K-On! and moe stuff seemed to be dominating their time, with the prestigious studio even rumored to have passed on Visual Key’s Little Busters Adaption. With an aura of disappointment surrounding KyoAni’s recent decisions came Summer 2012, and the series Hyouka.

Hyouka is,  in many ways an amazing series, filled with nuance, visual splendor and intricacy. Beyond all of that, however, Hyouka is also proof of the fact that KyoAni has, simply put: Still got it.

Hyouka is an amazing achievement on many levels, and its actually quite a tragedy that it will likely be remembered as Summer 2012’s sleeper hit series. Its almost a crime to think that the series did not get simulcast on any of the usual avenues for watching anime legally nor a lot of press from Anime blogs/websites (including this one). The end result, is a scenario which probably led many people to miss out on this amazing gem of a series. 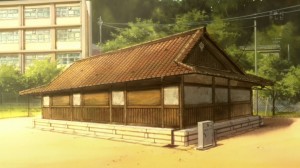 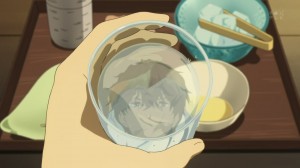 If there is one thing that Hyouka achieves that truly sets it apart from anything both current and old in the Anime landscape, it is its perfection of “subtlety”.  Hyouka does what very few series have done in general; It “shows” rather than “tells” and respects its viewer to be able to discern what’s happening in the big picture and connect the dots.

Not only does the series have some of the most nuanced, in depth and realistically realized teenage/high school characters, but it develops those characters throughout its 22 episode run with such finesse and elegance that it puts all other character-centric shows to shame. 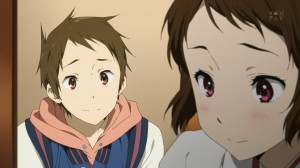 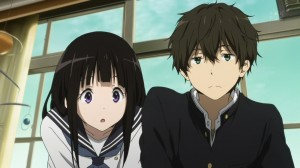 Hyouka’s story revolves around four high school students. Oreki Houtarou (the protagonist), ends up joining the “Classics Club” at the request of his older sister. It is there that, Oreki, a relaxed, lazy and “energy saving” fellow runs into the extremely intense, very curious and somewhat preppy Chitanda Eru. The duo is joined by the cheerful “jack of all trades” Satoshi and the strong, firm but loyal Mayaka, as they live their lives as high school students and members of the Classics Club.

Oreki, despite his lack of interest in putting effort into anything, is actually a clever thinker and a sort of “detective”. What makes him such an interesting “detective”, however, is that he doesn’t exactly solve murder mysteries or crime related mysteries, but rather more every day issues. Mysteries that revolve around things like uncovering the past of the Classics club anthology “Hyouka” or finding out what an unfinished film script’s intended ending was is the kind of stuff that the series chooses to deal with. The series highlights real world, every day mysteries and makes the ordinary look extra ordinary with careful buildup, great attention to detail and consistent logic. 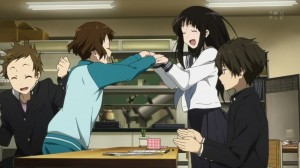 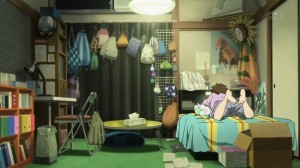 The mysteries that Oreki solves, tie directly into his own personal life, development and that of his friends. With every event, the characters, very organically grow and mature. At the same time, the story develops and builds on top of little events to create some really big pay off moments. When at its best, Hyouka truly shows what the Anime medium is capable, fusing intricate story-telling with amazing character development.

The series features equal parts mystery, high school slice of life and even romance and comedy thrown in for good measure. There’s something here for most people, and its not hard to find either. The series deals with every theme it tackles without favoring one for other, highlighting that all these things are an equal part of life. 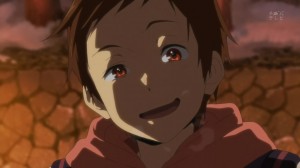 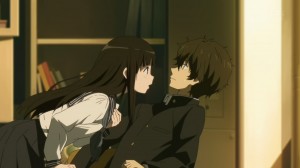 Life definitely feels like its being “led” by the characters in the series. By the end of the series, each character has gone through a major character arc, and in the process, truly changed and grown as a person. While  the ending could be described as “open-ended”, it is, in fact the best kind of open-ended ending one can hope to find in anime. It brings the theme of the series full circle, and really shows how far all the characters have come.While there are definitely more novels to potentially adapt a second season from and continue the franchise, Hyouka is also one of those rare series that actually delivers a satisfying open-ended conclusion.

While Hyouka earns a definite recommendation from us based on its story and characters alone, this is indeed a Kyoto Animation work we’re talking about. Hyouka is, simply put, KyoAni’s best work yet, with production values skyrocketing to the heavens. 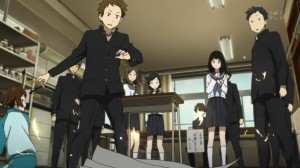 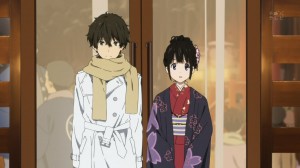 The animation is the best we’ve seen in an anime TV series to date. The art direction, is simply put, awe inspiring. This is a series that will give the viewer multiple moments of “wow” in everything from  jaw dropping sets and backdrops to of course, smooth as silk animation.

If there was any doubt that the folks at Kyoto Animation were masters of their craft, then Hyouka puts those doubts to rest, buries them, and holds an elaborate funeral ceremony for them. Everything from the animated facial expressions of characters, to big scenes with Cherry Blossom petals falling everywhere, never fail to impress. If the series covers great ground in storytelling and character development, then visually, it is indeed also a great work of art. 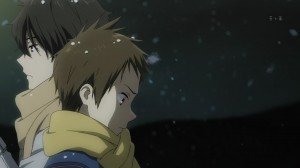 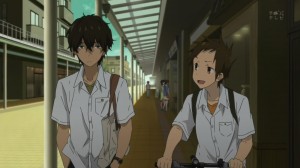 And not just visually either. The series features excellent music, voice acting and general sound work. From the extremely memorable two OP/ED songs to the general OST, Hyouka is just simply special and magical. To add to the already high bar set by the series, Hyouka features some of the Anime industry’s most talented seiyuu. These amazing voices appear sometimes in no more than one episode minor roles, adding to a near magically performance and great believability to every character that appears on screen, for however long.

For all that Hyouka achieves, which, lets be honest at this point, is more than most anime series have achieved in the last few years, it does have one flaw that may prevent some people from being engaged with it. Hyouka is simply put a sophisticated piece of storytelling. Perhaps a bit too sophisticated at times? Basically, the series is at times unapologetic and feels slow. Like any great story, Hyouka slowly and carefully builds up to some truly amazing story and character moments. The issue is, that while there are a lot of good moments, there are truly only two stand out “epic” parts. The stand out parts of the series being both the Kanyaa Festival arc as well as the last two episodes of the series, add up to a total of two. 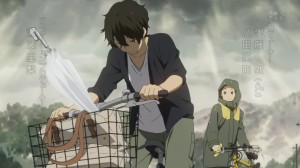 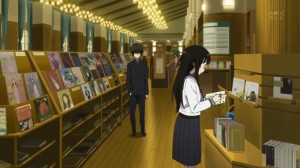 When something truly mind blowing isn’t happening, Hyouka takes it nice, slow and easy. Its relaxing, and can do things like spend an entire episode on a “hypothetical situation” conversation between two characters, and still manage to entertain. And while the series does a good job of keeping the viewer’s interest throughout, its also hard to disagree that the quality of the story on an episode to episode basis varies. Whether this is a flaw for the series, or simply clever buildup is something that is largely debatable.

Regardless of the episode by episode break down, however, it is easy to recommend Hyouka as a whole, based on its stand out Kanya festival arc and the closing episodes alone. The fact that the animation, art, seiyuu performances and music are top notch only help to build an already strong case. 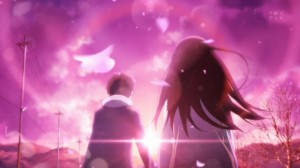 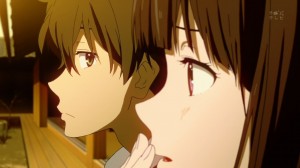 As is no doubt evident by now, Hyouka is a truly remarkable series. It is an excellent example of what the anime medium can do should everything fire on all cylinders. Pretty, subtle, graceful and sophisticated are just some of the words to use when describing this series. So… Finally, it must be stated that passing on Hyouka would be a tragic loss for anyone even remotely appreciative of Anime today. We award Hyouka with a grade of A+!