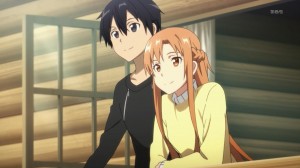 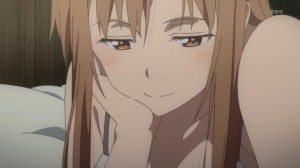 So last episode we have Kirito and Asuna in the same bed and now there’s a kid XD. But really I was surprised by the appearance of this Yui girl. The OP made clear that she existed, but I wouldn’t have guessed that she’d appear in this manner. They haven’t even cleared this game yet and now they’ve got a kid. All kidding aside it was nice to see that kind of family atmosphere created when Yui was having lunch with Kirito and Asuna. Not something I expected to see in the show, but certainly not unwelcome.

This pretty much covered Kirito and Asuna’s ‘honeymoon.’ Taking a break from the front lines and just having fun in each others company. Clearly from the pictures they were having quite a bit of fun and probably fun that Asuna was pushing for. Since she’s been as fired up about clearing this game as anyone, she probably hasn’t had much fun at all. They got their nice house on a seemingly peaceful floor which is certainly a fitting place to have a honeymoon. If it actually busted their bank accounts it must have been pretty damn expensive. I’d think that any places that look as monster free as this one did are probably of extreme value. A peaceful place in the middle of nowhere is definitely prime real estate. But I think good for the both of them to take a break to recharge their batteries a little. There is still a lot of the game left to clear, so it’s important not to burn out before the finish line. 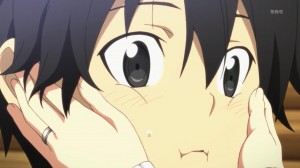 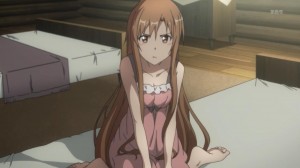 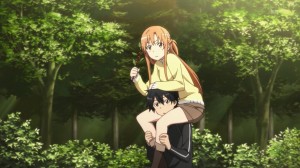 I liked how they touched some more on this relationship. Some might ask if it was something that they’d only keep within the game. Especially to someone like Kirito who probably was as much a loner outside the game as he was when he first got in there. Think he was unsure about whether Asuna’s feelings would carry on even after they got out of there. But like it or not she made it perfectly clear that he’s stuck with her for life. No matter what when they get out of there she will track him down and get back together with him XD. There are times when Asuna can get embarrassed, but she can also be downright blunt regarding her feelings. Definitely blew Kirito away with how sure she was when talking about how real her feelings were.

Really Asuna was just a combination of cute and fun this episode. She got embarrassed thinking that Kirito might be younger than her, but then was doing all sorts of childish things like asking to ride on his shoulders. I suppose in SAO you can pull off that kind of thing easily since parameters like strength and skill can actually define how strong and fast you are. But I think it’s fine since they should have fun while they can. Who knows what will happen down the road so no point letting a bit of embarrassment stand in their way. 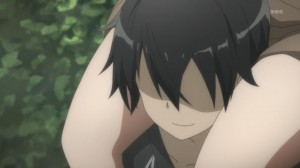 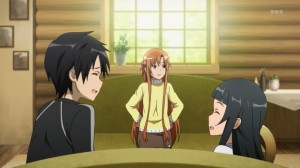 Kirito had plenty of fun himself though. Freaking Asuna out with the ghost story was probably a kick for him. Besides the guy is living with the girl he loves and getting those sandwiches, so he’s probably not suffering that much XD. But really whenever I see that guy actually eat something it’s those sandwiches, she really found an effective way to charm him there. Though I think he really enjoyed having Yui around since it did create that family atmosphere and for someone like Kirito who has spent most of the last two years alone, that’s pretty precious.

Of course in the end they can’t stay like that forever. They would have had to return to the front lines and continue the struggle. It was pointed out a few episodes ago how the amount of players on the front lines continues to decrease. It’s not because they are getting wiped by the bosses, but people are getting burned out. If Kirito and Asuna just start living peacefully in their nice quiet house they’d just be adding to the problem. If they want to see the outside world again they have to step up. 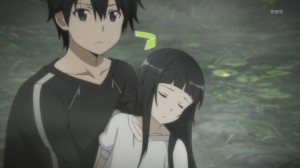 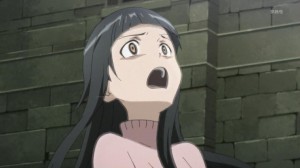 The big mystery though was all about Yui. The girl clearly isn’t just some normal player that got lost in the world. Bugs certainly must exist in a game as extensive as SAO, but I doubt the explanation for her lacking a cursor is that simple. The girl seems to have no memory and that weird effect she caused near the end of the episode was hardly normal. The whole area seemed to be shorting out. Certainly it’s a game, but somehow this girl was having an effect on the very environment around them. A sweet girl, but it was somewhat shocking how quickly she just decided to call Kirito and Asuna, Papa and Mama. Got really attached and in a hurry, which would be surprising if she had any memory of her actual family.

It’s just a gut feeling (though the OP helped) that this girl is somehow created by the world. With technology as advanced as this, it wouldn’t be overly surprising to have some sort of artificial intelligence come into being. We’ve had people locked up in this world constantly for years, who knows what could really happen. Whether she is artificial or not, the girl clearly isn’t just some normal player. Anything is possible because we never got a good reason for why these people were trapped in the first place. Yui could be the key reason why this was done. For now there’s nothing but mystery surrounding this girl and I’m looking forward to finding out the truth. At the very least they aren’t likely to find a parent in the Town of Beginnings. 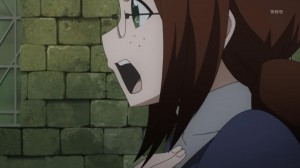 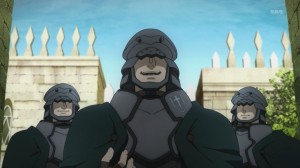 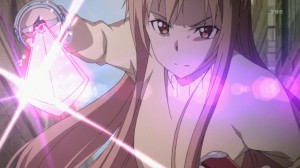 Seeing that town just showed how the situation has gotten rough in places. Only 6,000 out of the original 10,000 are still alive, so they’ve lost about 40% of the player base they started out with. I am surprised though that there are still almost 2,000 people living in that first town. Two years trapped in that starting area eating crummy bread and hiding out in fear. It seems like the situation with the Front guild isn’t great either. A group that tried to support all players (by getting information like dungeon maps) seems to be losing it’s focus this far into the game. Having members going around harassing people and collecting taxes? I can see how some of the players might resent those still hiding in the first town while others are fighting, but that’s just getting cruel. Asuna proved here that just because you stay in town doesn’t mean you are safe from everything.

That duel actually showed a disturbing side to being weaker than others. Sword attacks can’t damage your HP bar, but if someone wanted to they could just keep banging you around with sword skills for a very long time. The sensation of getting bounced around constantly would at the very least make you sick and would be torture. Think a possible reason that town was so quiet was because people are hiding in their rooms from the Front. It’s pretty easy for things like that to be ignored because everyone is so focused on the front lines or simply getting by. Unfortunately the players have to police themselves here and that allows things like we saw in this episode to occur. 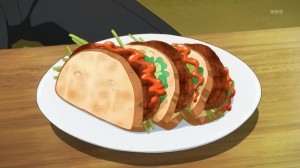 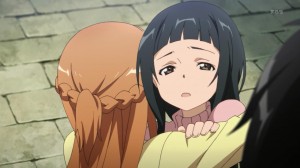 So yeah, this episode wasn’t about some major battle, but it did advance the story. Yui seems to be a pretty important character in the greater scheme of things. I’m curious to see where the story goes from here and just hoping we never see Kirito in that white outfit again. I could forgive them never going back to the front lines if it meant he didn’t have to put that thing back on XD.
Score: A