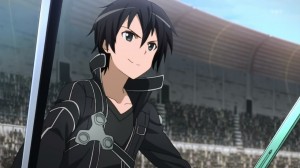 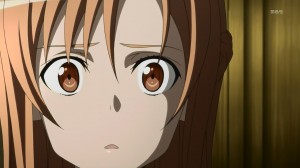 I’ve got to give SAO credit. After last week I didn’t think it was possible for this upcoming episode to be anything but average in comparison. Yet I have to say this week was pretty amazing in its own right. Last week was all about the boss battle, but this one was all about Kirito and Asuna. Of course this is the kind of episode that will have you either excited or thinking it came on too fast. But the way I see it is that they’ve spent two years in this death game and have known each other for quite a long time. Sure, most of the time Kirito was off soloing, but they met up often during those boss meetings. Besides lets face it, sometimes love comes on quickly especially when you don’t know what the next day will bring. Kirito especially has two near-death experiences in a very short amount of time. So personally I was just enjoying the episode.

This episode was just packed with different things and kept me interested throughout. Of course the story definitely continued on in terms of jumping from one even to another. It’s kind of staggering in a way how much Kirito’s life has just been changed over the course of one episode. Went from a solo beater who was hiding his best technique to battling the leader of a major guild and taking huge leaps forward in his relationship with Asuna. 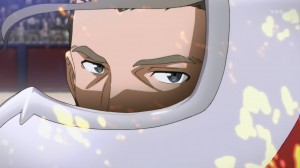 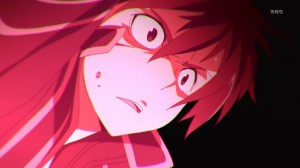 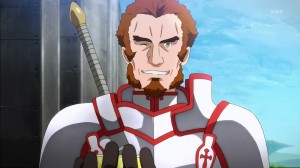 I have to say right off the bat that Heathcliff guy is hiding something. It’s one thing to claim the guy has some unique skill, but that move he used to end the fight with Kirito was weird to say the least. I’d probably call it closer to being outright broken since he suddenly moved even faster than Kirito in his Starburst Stream skill. It was like time froze and yet he was moving instead. Whether it’s a skill or some sort of cheat/hack it definitely won him the match and roped Kirito into the Knights of Blood. The duel itself was fairly entertaining as Kirito tried to break through that shield and sword style with pure power. Not that being in a guild is the worst possible thing for Kirito since at level 96 is bound to start running into the limits of soloing. I don’t know if SAO has a level cap, but his leveling is bound to slow the higher he goes. Considering that Kirito wants to keep a safety range as he goes it’d probably become tougher and tougher to stay safe on the front lines. Still never good to get beaten by some sort of trick and plus the white uniform looks horrible on him. Clearly he had a good sense when he picked out that uniform XD.

The Knights of Blood just give me a bad feeling. A leader who clearly has some secrets and wasn’t happy that Kirito forced him to reveal that trick. Plus they do have some very dangerous elements in their midst. With such a large group it’s tough to ‘know’ everyone in the guild. Thus you have someone like Kuradeel who used to be in a PK guild end up being able to join up. They even had this lunatic ‘guarding’ one of their most important members. Of course it’s not just him, Godfree was a total idiot. This is a death game, not a situation where you treat it like a normal MMO. Going out on a trip and taking away crystals is not only reckless, it’s stupid. Those things are so expensive that you’d only use them in a life or death situation. In the end that guy’s stupidity got him killed. I won’t get on him for not being able to tell that Kuradeel was insane, but there are just times when you don’t take risks. He certainly didn’t deserve to die, but he put himself in a dangerous situation with a small party and members who didn’t even come close to liking each other. 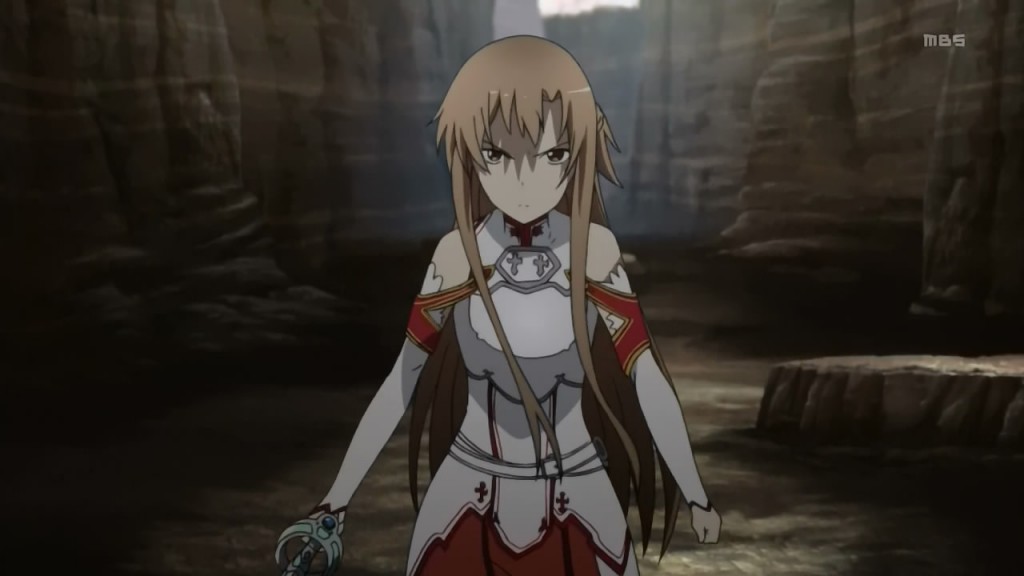 Wrong girl to piss off

But wow Kuradeel was utterly nuts. I mean we’re talking laughing like a lunatic insane. Not surprised he was in Laughing Coffin at one point. No idea why he left, but maybe just for the sake of protection in a larger guild. That or he was a creepy guy stalking Asuna, but we may never know for sure. He really took Kirito kicking his ass pretty personally there. Actually going to the extent of setting up that entire trap just to make sure he killed his target. I guess once you get used to killing people you can do it for increasingly meaningless reasons. All he had to say when he got back was that they were attacked and a few members of the attacking group were green members. Of course he didn’t count on how protective Asuna is of Kirito and how far she’d go to save him.

On that note it was truly enjoyable to watch her just rip into Kuradeel. Excuses were not going to work after he nearly killed the guy she loves. The pissed off expression on her face was almost chilling. She was out for blood at that point. Of course in the end Asuna is still human and the idea of killing another person did make her pause. This whole situation has mostly been taking on monsters and maybe fighting off PKers when necessary. In the end Kuradeel should have just counted his blessing instead of thinking that he could take advantage of the situation. Should have known the poison was going to wear off and that Kirito would be able to charge in. But suppose someone that insane wouldn’t have good skills at thinking ahead.

That was a pretty incredible save by Kirito. Sure, since this is a game their limbs will regenerate eventually but don’t think most would be able to just block with an arm like that. He was just pissed and took that guy out in one shot. Was cool to see that there are some unarmed skills available to players, though I’m sure they don’t get used too often. Most likely just a way to defend oneself in case their weapon breaks. Kuradeel can call him whatever he wants, but protecting himself and Asuna was the top priority. He tried to settle things once with this guy in a duel, but apparently this was the only way to make sure he didn’t bother them again. 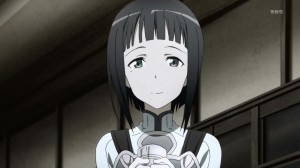 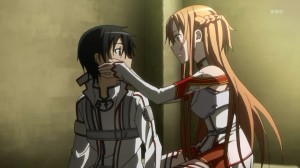 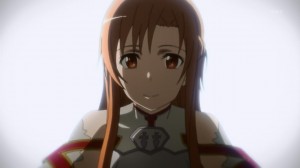 I just enjoyed watching Asuna and Kirito in this episode. Kirito came out and told her about Sachi and the Black Cats, explaining that they were the reason that he couldn’t join any guilds afterwards. Can only imagine how Asuna felt realizing Kirito had been carrying that past and those deaths with him for all this time. He’s not all strength and does have weaknesses and pain that have haunted him to this point. That’s why I’m sure Asuna saying that she’d protect him and wouldn’t die meant quite a bit on his side as well. She started to give him a reason to keep on living. He’d gone through quite a bit to this point. That suicidal boss run for the revival item, starting to open up with Silica, and even Lisbeth reminding him that living is much better than just dying together with someone.

Feels like what she did in this episode is what gave Kirito the fire he needed to fight to survive against Kuradeel. He couldn’t just die and leave Asuna to mourn his death. Watching the Black Cats and Sachi die would give Kirito the perspective on being the one left behind. Thus I don’t think he cared that much about having to kill Kuradeel to protect Asuna. He’s blamed himself for enough deaths to this point. Compared to those deaths what does killing someone like Kuradeel really mean?

Of course to Asuna I can imagine Kirito having to kill someone did really hit her hard. If she didn’t get close to him he wouldn’t have been nearly killed in that boss battle, forced to join the KoB, and wouldn’t have had to kill someone because she hesitated. I have to say that was a pretty bold confession on Kirito’s part. No doubt that he took every word seriously. It’s thanks to Asuna that he’s still alive, both because she saved him and because she gave him a reason to keep fighting. 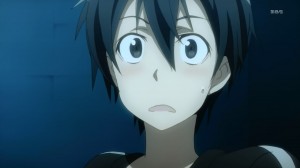 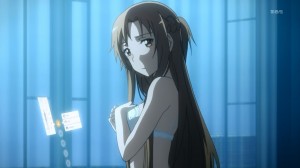 One can argue about how quickly this all happened, but it doesn’t seem to be all that fast. They’ve known of each other since the second episode and met numerous times preparing for boss battles. Then you have the murder investigation where they became ‘friends’ and things just kept ramping up from there. In a world where anything can happen I say go for it when you find someone you care about. They can be crucial emotional supports for each other and since this ‘game’ is probably only going to get tougher I can support that.

I did get a laugh when Asuna jumped to conclusions about what Kirito meant by spending the night with her. Of course I kind of read what Kirito said the same way so can’t really blame her. She mentally prepares herself for what is coming and Kirito is left dumbfounded XD. Still clearly they salvaged the evening pretty well and Kirito even added in the marriage proposal. They definitely didn’t hold back anything in that regard. 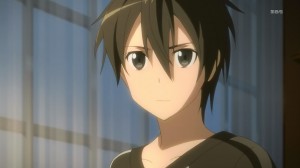 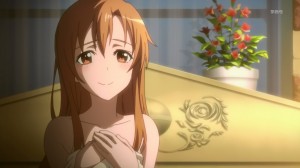 So yeah we go from a boss battle to the main characters getting together. Frankly I like it when series don’t hold back with the main characters. Let’s not pretend that any of the girls have a chance here. They’ve got a lot to deal with in this series so no point teasing about the main couple. Next week might be a bit less serious, but who knows with this series. Can say though I’m eager to see it.
Score: A+