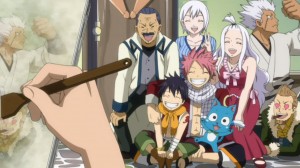 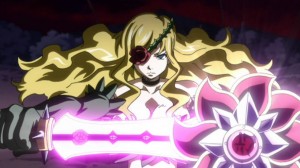 Its a strange feeling that one gets when watching this filler arc thats currently unfolding. On the one hand, I stand by my earlier opinion that the core concept behind this filler is pretty sweet. There’s enough plot threads and enough interesting ideas in the plot to make this a truly enjoyable companion to the wealth of manga canon stuff we’ve experienced. Yet, if there’s one thing that this arc has reaffirmed its that Fairy Tail isn’t just about clever idea or cool scenarios, its about how those things are presented and executed to the point where it becomes an art form.

Its just speculation at this point, but I think Hiro Mashima-sensei really went towards this filler arc with the best of intentions. The ideas and story are interesting enough that they have undoubtedly come from the actual source. The fact that the filler plays around with stuff that’s actually pretty central to the manga’s cannon, i.e Lucy’s dad and the whole issue of Cobra’s snake, its quite obvious that this was not intended to go down as another lame filler arc in a history of increasing disappointing ones.

Added to that, the design, powers and techniques of the new Oracion Seis ooze coolness. Despite all that however, it seems that while Mashima-sensei was definitely putting a lot of this into his franchise’s first filler arc, the anime production staff, and more importantly, the writers just couldn’t keep up.

Its one thing to adapt a manga, almost frame by frame as Fairy Tail tends to generally do, its another thing to use clever dialogue and exposition to stir emotion, feeling and a sense of wonder. This filler arc feels a lot like the anime series Guilty Crown, great concept, great characters but horrible execution, bad pacing and laughably cliche writing.

A lot was revealed in these past 5 episodes, but not nearly fast enough and without a good deal of fluff to accompany it. I’ll go over the big things. 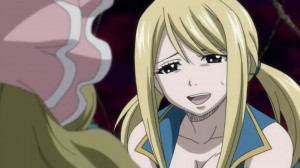 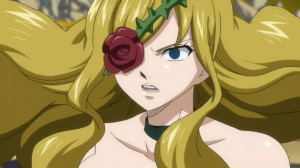 Get a Hint Nee-san! I made it pretty darn obvious!

Firstly, Michelle Lobster is not really Michelle Lobster. It turns out our clutzy chick is none other than Imitatia, the latest member to join Oracion Seis. Now, if you go read my posts on this arc from before, you’ll see I pointed out my suspicions about the character. I honestly thought that Imitatia/Michelle was the weird Slott Teddie bear thing. It was surprising to note that she wasn’t and while predictable, if handelled well, this could’ve been a pretty cool shock.

Instead, we got the same old, tired, anime cliche of Lucy being all shocked, going into denial and then having Michelle/Imitatia prove it to her beyond a spec of doubt. Average, cookie cutter plot that is so above what Fairy Tail can provide and has provided in the past. 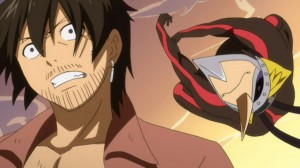 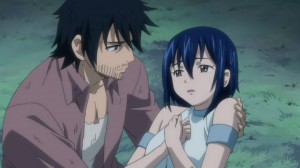 Mest: Is this what my story is? Wendy look alike: Yes, I’m so sorry.

Secondly, we got to see Dragonbalt/Mest again. This whole plot thread, was again, really interesting if done right. Mest had been drinking for the past 7 years, guilty over not having been able to protect Wendy and Fairy Tail in the previous Grimoire Heart battle and the whole Arcnologia destroying them and the Island thing.

But instead, we have the guy go through a cliche battle with Racer, save a chick and then end up recovering all within the span of a single episode. It felt, forced, rushed and not at all well thought out. The idea was there, but the whole plot with the girl who looked a lot like Wendy was really not all that impressive.

Speaking of said girl, I had seriously thought that she would have been Will Neville, but she ended up being nothing more than a descendant of his disciples. While not a bad idea to play against audience expectations, I really do want to question the point of the character at all. Was her point to just snap Mest out of his funk? If so, everyone could’ve been spared a whole lot of trouble by Lahar simply TELLING Mest that everyone from Fairy Tail was still alive.

And no, I’m not buying the whole: “Mest must learn for himself” bullshit that Lahar is spewing. You DO NOT do that, no reasonable human would do that. You wouldn’t just not tell a ragin alcoholic with guilt issues that the people that he failed are actually okay.

FInally, we get the whole clock thing going, and the “REAL NIGHTMARE” has begun. A pro tip to the anime writers… Real Nightmare, simply saying that in English does not suddenly make it all menacing or epic. It just sounds dumb… REALLY dumb. It seemed like the writers were out of ideas and really just start flipping over the English dictionary and translating their words until they found something that sounded cool to them.

The power of the real nightmare is pretty darn lame too. It basically warps your sense of time, and removes the links between your memories, basically making it so you can’t tell what the hell is going on. Kinda like what happened to Erigor. 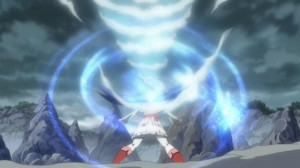 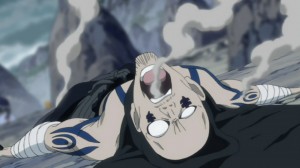 Ah yes, as a side note, Erigor regained his memories by Wendy’s healing and was basically exchanging his memories for power. He was given his memories back and regrets his actions. He’s done and over with.

Alright then, back the Infinity Clock. What I don’t understand is why that friggin thing was ever even created, and why a religious cult was formed around it. A religious cult that was tasked with protecting a weapon that was created to warp all sense of time for the human race because?

Because it had to exist! Because Fairy Tail needed some manner of threat to deal with. Again, a huge difference from regular Fairy Tail, where even the ancient magic items have some form of back story, even if it is just that someone like Zeref created them because he’s just evil. The existence of the Infinity Clock serves no real purpose or point other than to end the world.

It just makes it all the more of a cliche plot device when there’s no backstory or reasoning behind it. Its the details that make a story interesting and allow you to suspend your disbelief. It is therefore, extremely noticeable when those details are absent. 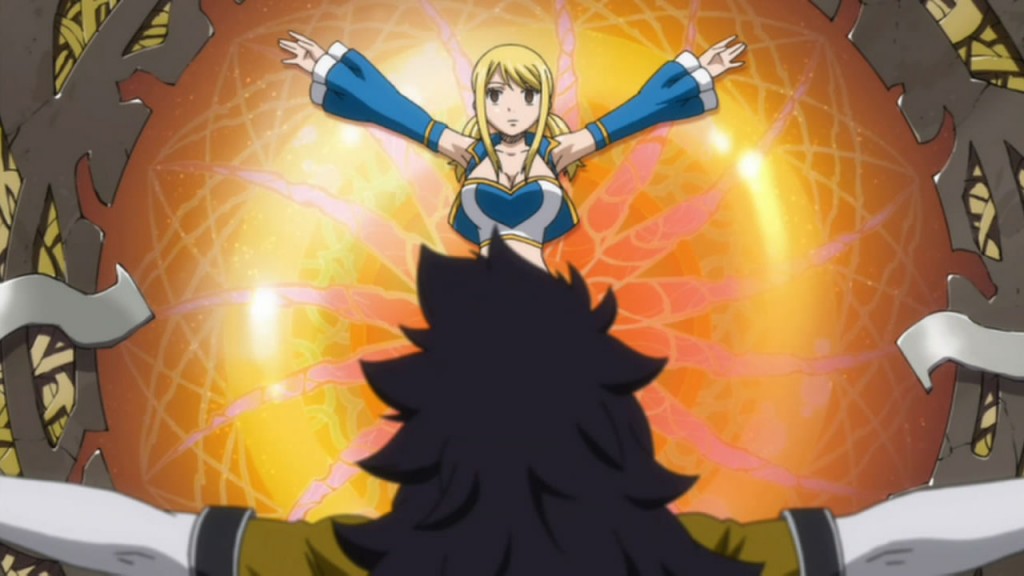 From fanservice to device power source.

So now… we have Lucy trapped, powering the Infinity Clock, because apparently a Celestial mage is needed. Oh and Natsu broke out of his prison where he was being kept with the Jiggly Butt gang. Haven’t we had enough of these guys already? Seriously? O_o 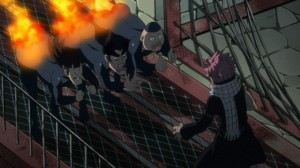 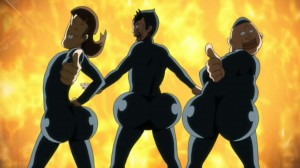 My final opinion? A running theme in this arc is definitely that it feels like a missed opportunity. Unfortunately, it seems like there’s still a decent chunk of it left. I guess we’re just supposed to weather storm…. *sigh*