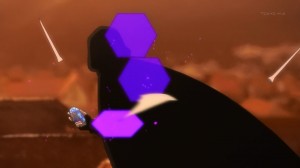 So the murder mystery wrapped up this week and definitely had a few more twists to it than I expected. At least this episode proved to me that some people can be really screwed up while others can surprise you. I wasn’t sure what to expect from this mystery and sadly wasted some time on speculation that wasn’t even close to being on the mark. But that’s the way it goes I suppose when dealing with a mystery.

Well on the positive side it’s a good thing I didn’t feel that bad for Yolko’s apparent death last episode. She literally was as guilty as she looked. Didn’t trust her from the start. Of course not a bad strategy when you are clearly suspicious to fake your own death. How many are going to suspect the victim? Well I suppose it’s not the first time that trick has been used in a mystery, but they did a good job of selling it. Was definitely far more focused on theories as to how the killings could be done rather than if they were done. After all if it was possible for these killings to happen then the game would fall into pure chaos. Instead it was all just a deception and Kirito was right about the game. It has been remarkably fair in that respect. Well in the end Yolko wasn’t that bad of a person, just put everyone through a stressful situation. Can understand wanting to find out the truth behind Griselda’s murder. Of course in the end it wasn’t even close to what they had expected and wasn’t about the ring. 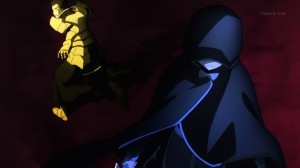 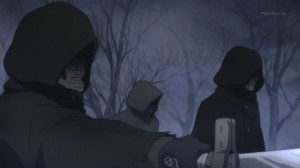 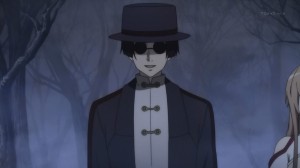 Well I’m glad in the end that there wasn’t some big killing trick. No matter what it ended up being that would make it pretty much impossible for people to feel secure in their inns or just walking around the town. Everyone needs a few moments to relax and bring down their stress levels and taking that away would just set everyone up for collapse. The fact that it was a trick does make it easier to swallow. All we saw was that items lose durability and are destroyed in a flashy way and that can be concealed along with a crystal. No loophole, just a tricky way to fake a death. Of course in the long term it wouldn’t be that effective. If they found anyone that knew Kains they could have tracked him, but assuming he was dead made that seem pointless. Yolko was obviously close to him and since she seemed upset about his death they didn’t have to check. In the end you can’t really fake a death for long this way, but it’s good for a short term trick.

What really has me freaked out are those PK groups and of course the killer of this story. Grimlock was one messed up bastard. I mean he killed his wife because she found a place where she could excel and grow as a person? It was fine when she was a submissive wife that he could control, but suddenly when the power shifted, he freaked out and killed her. The only way he could keep control was making her only a memory. He seemed to forget a basic thing in that people change. Even though her love for him clearly didn’t fade that wasn’t enough for him. Of course it seems like it was more than just what he actually admitted. He was scared and living in fear of death while his wife was taking charge and surviving. Could it also have been about jealousy? Being upstaged by his wife and resenting her for being able to handle a situation that he was struggling in. Regardless it seems Asuna nailed the main point, he wanted to control her and couldn’t in this world.

It is frightening to think that some follow Grimlock’s idea that you can kill legally in that world. Of course the idea of murder charges being applied following the escape of this game is a headache waiting to happen for lawyers. Think it could be done since you have the mental will to commit a crime still there and the knowledge that what they are doing will kill someone. Like saying pushing someone into a pit of vipers isn’t murder since the snakes actually kill the person. Though maybe people like Grimlock simply focus on how hard it would be to prove anything with little physical evidence. Maybe that helps explain these PK guilds. Though for some I think they’d end up being killers regardless of it being inside of SAO or not. 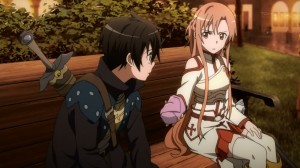 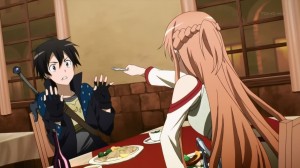 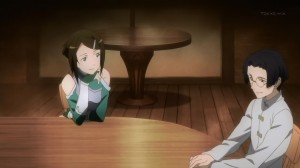 At least the episode wasn’t all gloom. There were some cute moments between Asuna and Kirito. The sandwich scene was good for solving the crime and just giving another perspective on Asuna. Seems like even someone as focused as her about escaping can have pretty normal interests. Clearly she’s pretty good at it with how Kirito enjoyed the taste and figured it came from a shop. Though maybe this scene gave more to consider about Kirito. Guy got flustered when finding out Asuna made the food. Ended up just randomly commenting and being so on edge that he dropped the food when she didn’t appear amused. In the end is a guy who has isolated himself a lot in this game and wasn’t all that good with people when it first started anyways.

But really the episode had a lot of good moments for them including the conversation over tea and the one right at the end. Do find it interesting that the game does have a kind of marriage system. Sharing your inventory with someone especially in a death game like this has a lot of significance. Though even normally you are putting a lot of trust into another person and symbolically it is revealing yourself. Even though she’s a very forward person Asuna seems to be a romantic as well. Just that in this situation she is rather focused on getting out first and making that her priority. An interesting question given to Kirito about learning something unexpected about someone he was married to. A solid answer from our lead considering it a lucky thing that you could learn something new about someone you already loved. Makes you wonder what Asuna might have hidden. Wouldn’t necessarily ask that kind question if it wasn’t a bit of foreshadowing. Good job by Asuna to push the friend thing in at the end. Seems like she’d have to push the issue since Kirito just isn’t the type to ask with how he isolates himself. The case must have improved her view on Kirito though it might not have been that bad from the start since he did help her out in that first boss battle. Regardless Kirito does kind of need people who will approach him since with all that’s happened on top of his personality he just isn’t going to reach out that often. 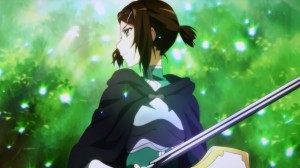 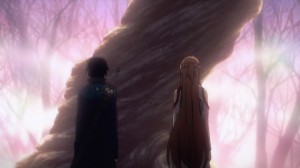 The ghost thing was kind of interesting and maybe a fitting scene. All this talk about ghosts and negating one being the killer and suddenly one does appear. I’m sure she was happy to finally have her killer’s identity exposed and maybe appreciating what Asuna said to Grimlock. I can’t really say its a big shock for a ghost to turn up since how can one bring logic to that kind of supernatural event? It did help add some closure to these past two episodes and remind you that surprises can happen. Maybe the best part about that was the shocked expressions for both Asuna and Kirito. Asuna was clearly surprised to see a ghost, but held back more than Kirito who had a dropped jaw. 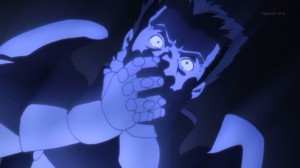 So this mini-arc ends on a pretty solid note. The mystery was solved and Asuna made it back into the series. Hard to complain too much when things go that well. Besides when you think about it no one actually died in these episodes. It was nice to get more views on life in that world. Hopefully Asuna starts showing up more and more often and the side stories are just about done. Regardless this was a nice couple of episodes when it comes to learning more about the world and developing Asuna and Kirito’s current relationship.
Score: A