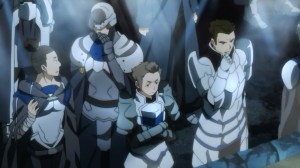 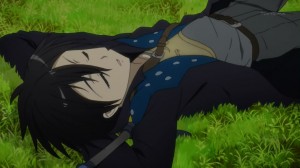 Well for the first time in the series we are given a story that is not going to be resolved in one episode. It also gives us the return of Asuna which isn’t a bad thing at all. Seems like the topic of player killers brought up in Silica’s episode really took over in this one. We had a couple characters killed off, though at least this time it wasn’t characters that we were overly attached to.

I’ll say sorry to Yoruko right now since for most of the episode I did have her as a suspect in all of this. Unfortunately the first person on a scene is a pretty good person to start investigating. Even more so in this case since she was close to the victim and could have gotten him to lower his guard. Doesn’t help either that she seemed to become more unhinged as the episode went along especially at the end. Of course this is a very stressful situation to begin with and now some mysterious force has killed someone close to you. Wasn’t really a big fan of her, but having her die like that was unsettling. Especially since everything that is supposed to be safe in SAO is becoming increasingly less so. If even the inns are no longer safe than what is everyone to do? 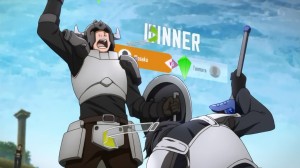 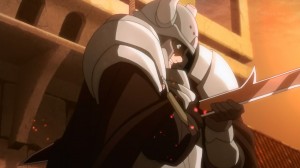 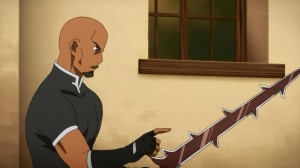 Of course when I think about it this sleeping PK thing is utterly horrifying. What if someone gets a high lockpick skill and can just go around breaking into inn rooms and kill people? It seems pretty nuts, but you never know. Suppose it depends on how the inn rooms function for this game, but if someone with a high listening skill can eavesdrop then the doors aren’t immune to being bypassed. THere is just too much to worry about in this game. Have monsters and people in the fields and if town is completely unsafe then the stress might make everyone snap. Sucks that you can’t even sleep peacefully outside and have to pay for inn rooms to avoid taking serious risks.

I’m starting to think Kirito’s third theory is on the money though. I mean obviously Yoruko wasn’t killed in a duel. It could still be a system exploit, but what kind? Something about the height maybe? Clearly the first guy died in the air and Yoruko was sitting high in a window. Wait a sec….ok this literally did just come to me. What if the person is attacking from outside town? Would take more than one person to set this up normally, but if you have someone hanging and then throw the weapon from outside of town you could hit someone while technically being outside of town. It’s not a perfect theory though since the person attacked is still in town, but could be something. Especially if the game only focuses on where the attack starts since normally there is little range abilities in SAO. But there could be a dagger/weapon throw ability and if that is leveled up to ridiculous extremes you never know. If not then maybe Kirito is wrong and this game isn’t fair. Not sure what could be allowing these people to be killed like this.

I’m not even sure the motive makes sense for these crimes. Sure, the killer might not be rational but it seems weird. If the vote went 5-3 then it means the leader voted and voted to sell the ring. Whether it was left up to her wouldn’t have changed anything. People who wanted to keep the ring would have been resentful and she still would have left to sell it. There has to be something more to all of this. Well I’m sure we’ll get to the truth of that incident along with everything else. 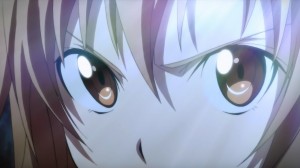 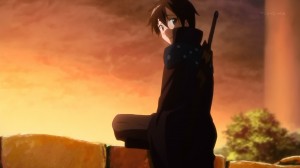 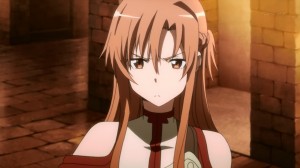 Anyways good to see Asuna again. Obviously she’s hardened up over the past year or so. Though do remember her being an intense person even back then. Wanting to take action to avoid rotting in towns like those too scared to venture outside. Something is driving her and maybe she has more reasons to want to get back to the real world as fast as possible. Regardless of her motivations she is driven and that has made her a rather prominent person in SAO. Took Kirito’s advice and joined a guild though it ended up being one of the top front liner guilds. Probably picked that one because it was a front line guild and she would be able to keep fighting and not hanging back like some guilds would. She has definitely turned into a powerful character and it seems she still focused heavily on speed and attacking power. If she has skill points to use they are probably going towards killing something.

Though does seem like Asuna and Kirito don’t agree on a lot of things. Kirito has had to see good people die in front of him and that has helped shape who he is. Can bring a lot of it back to Sachi’s death and the impact it had on him. Asuna on the other hand may have avoided such losses or at least attachments. The girl is constantly moving ahead while Kirito stops to help people while still keeping up that pace. He can’t just treat the NPCs of the game as inanimate objects. Part of it probably is that Kirito treats this world as a real thing. People really die there and therefore it is the reality they are living in right now. The NPCs might not be usual players, but they aren’t like rocks either. It makes tactical sense to use them as shields, but where does it end? If we can treat things that look human as not human does it reach a point where criminals are used as shields? It can be a slippery slope and frankly just a good idea not to forget our humanity.

Does show she cares though. She was pretty quick to stop Kirito from testing that weapon on himself. I’m sure it was perfectly safe since he does have quite a lot of HP and a battle healing ability. Still the chance was clearly too high for Asuna to be taking chances. Does show how quick Kirito is to act when he feels it’s necessary. Does show that she doesn’t particularly dislike Kirito either since she just wants him to call her by her name normally. Her attitude is one that can put people on their guard, but I’m sure there is a good person behind it. Will also say her sleeping was rather cute, especially the sneeze when she woke up. People are most off their guard when waking up and got to see a nicer side of her when groggy. Funny that her first reaction was to try and cut Kirito down for seeing her like that XD. Glad she restrained herself, though it clearly took a lot of willpower. 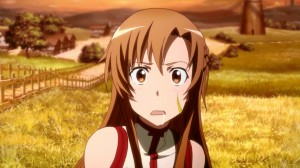 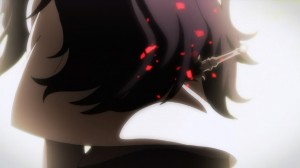 Well this mystery is a change of pace and does make me wonder just what the truth is going to end up being. They better hurry up and figure it out before anyone else gets killed. Can’t wait to find out exactly how the rules are being broken when it comes to PK in town. A pretty good episode though didn’t have any moment that stood out to me like the last couple have.
Score: A-