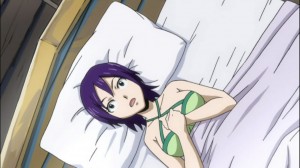 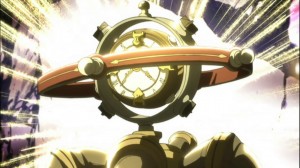 And with that, act one of this filler arc comes to close. Its definitely been a bumpy road getting here, with outright blatant disregard for the character development that many of the characters in Fairy Tail have gotten, yet I can say with some degree of relief that things might be looking up. With the stupid clock chasing parts and the stupid time filling battles between the Legion and Fairy Tail out of the way, we’re finally getting underway to what might be what this story has spent waaay too many episodes setting up.

At its core, the idea for this filler isn’t a bad one. I’d actually say that, given how much it potentially borrows from and even mess with the canon, its quite the idea. We have the death of Lucy’s friggin dad tied to this whole story, as well as whatever her mom was involved in. Now, I’m pretty darn sure that Lucy’s mother, Leila Heatfillia will probably have her own story that will be dealt with in the manga proper, but its still impressive to link to some pretty core stuff.

There’s even major characters like the Oracion Seis coming back, with everyone from Midnight to friggin Brain. Added to that, nearly every major character that’s ever taken part in Fairy Tail up to this point is going to be part of this story. Its gigantic, its epic in its scope, and it makes me scared for the very idea that this might be the anime’s original ending.

Implications on cannon regardless, while the idea is novel, the execution is horrible. As I’ve said at length in my big catch up post, the writers for the Anime production just don’t get the characters well enough, dumbing them all down and making the characters do odd things to service the plot. Its a trap that some of the best animated anime can fall into, and its one that this filler arc is falling into. 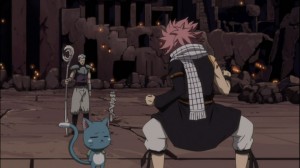 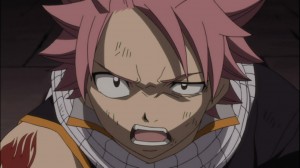 Again, the episode this week was more or less Natsu charging at god-mode enabled villain Byro. The guy can friggin nullify magic… and ALL types of magic. Not only that, in a fist fight, he’s as strong as friggin Gildarts. Added to that, the guy has offensive attacks. That’s not strong, or even overpowered, its just flat out wrong. And its not just wrong in a freaky Aizen kind of way either (Bleach fans know what I’m talking about), its just plain breaking the world and its rules to make the villain seem threatening.

If there was ever a way not to do a story, this is definitely it. Its cheap imitation of a great story. To further illustrate what I mean by this, I’ll ask everyone to just sit through this very episode. 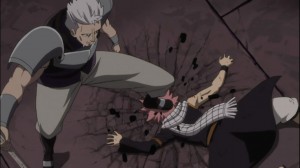 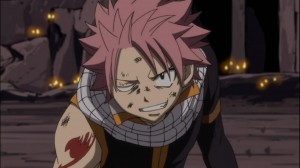 The whole concept of right and wrong, of fighting for your comrades, about the mission, all that philosophical stuff that actually seems to make a ton of sense in this series most of the time, ends up being nothing but pointless babble for the characters to spew. Its actually really really horrible formuliac, as Byro focuses entirely on “the mission” putting forth a ton of wordy crap that basically means: “The Ends justify the means” while Natsu simply reponds with his class:

“I don’t get this complicated shit, Rawr Fairy Tail! Rawr The Guild! Rawr I punch you!” 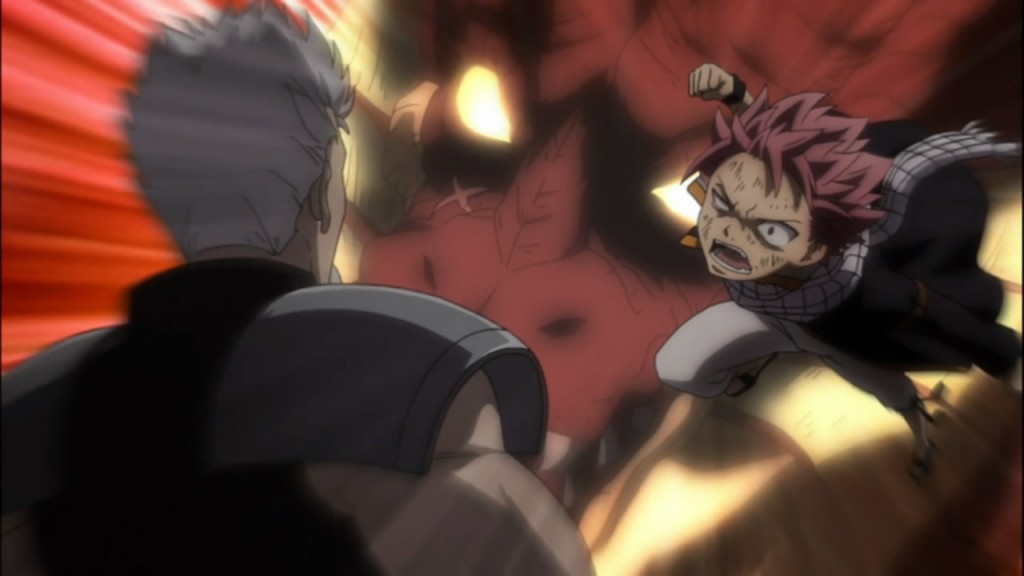 All Natsu’s good for these days is rushing in…

And detractors will be quick to point out that Natsu always does this. I’ll be quick to point out that yes, he does, but there’s an idealogical point to all of it. Natsu does NOT just simply go: “Derp, what is this complicated stuff, I PUNCH”, more often than not he recognizes that while in some twisted way, what his opponent is saying MIGHT make sense, its due to their over complicated thinking and over analyzing that they arrive at their rather twisted conclusions.

Natsu represents the very simple notion that, sometimes, things are just best left simple and over thinking things can be just as destructive as under thinking them.

Added to that, Natsu generally DOES, to some degree, find a fault in his opponents logic, even if it is an easy hole like “You can’t live life alone” or something really cheesy like that. Its cheesy, but the contrast in idealogies and Natsu’s subtle, slightly simplified view of the world is handled with enough finesse that it actually ends up being refreshing and entertaining. That, combined with his tenacity to not give up. 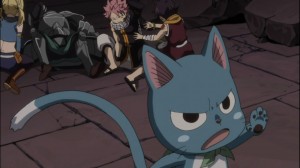 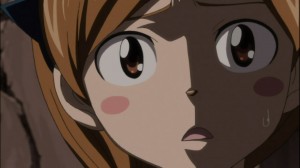 Both ideas are used here, but horribly wrongly, having multiple characters spew out words about ideologies, one after the other, and Natsu simply disregarding everything and going: “What? You say something? I PUNCH NOW!”

As a fan of Fairy Tail’s use of themes like friendship, looking at life simply, forgiving other people e.t.c, I find this to be a horrible perversion of everything the series stands for. 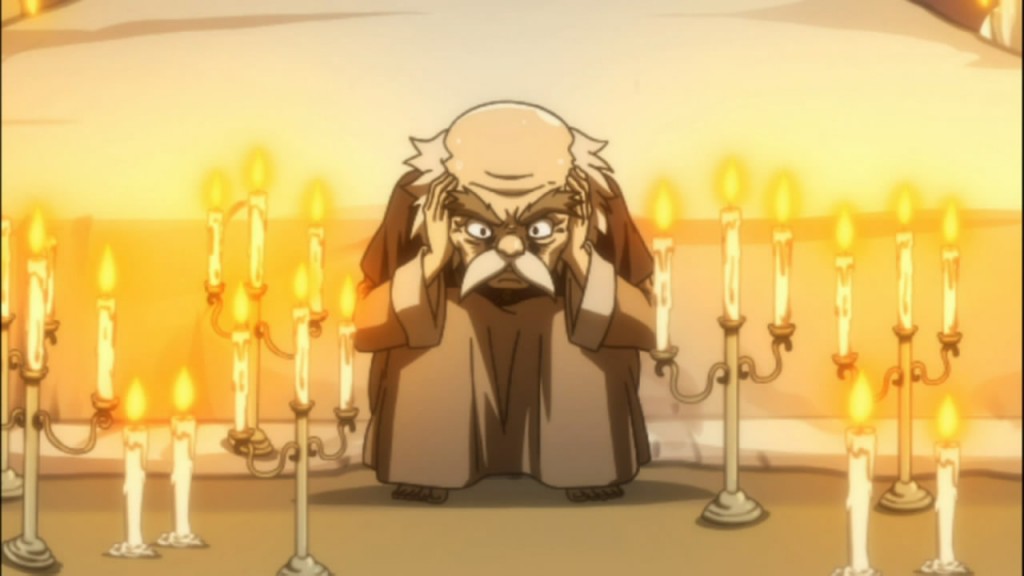 This can’t be Fairy Tail! O_O

Now… given all of that, can this filler arc actually save itself? Yeah, it can. If Fairy Tail’s filler just keeps things simple, does not try to blatantly copy what only Hiro Mashima sensei can do in his manga, and sticks to just interesting battles between all the characters, then yes, it can serve as an interesting distraction. 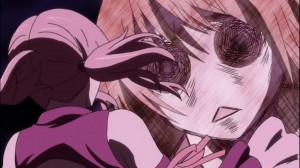 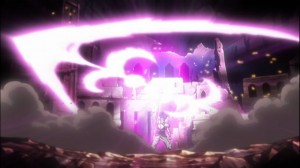 I think the OP gives me hope that the filler will not continue to trample on everything that I hold sacred and love about Fairy Tail. It’s going to de-evolve into a slugfest, but it’ll be doing interesting things like throwing Midnight against Natsu, or having other villains fight against different Fairy Tail Mages. That, in itself, can be very interesting and hold the core audience like myself who are just kind of curious to see how these fights will play it.

Is it deep and enthralling as Fairy Tail is generally? No probably not, but at this point, I’ll take what I can get. 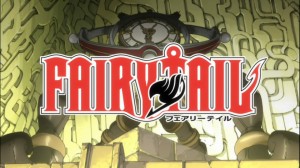 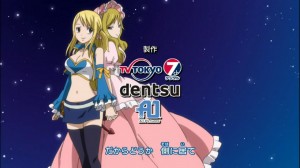 Didn’t blow me away, solid song and pretty decent animation. Again, not exactly the strongest I’ve seen from the series, and I’ll say that Fairy Tail has a GOOD amount of great OPs, but still, good enough. 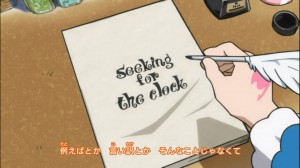 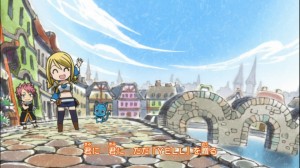 Same really, I’d even call this a bit more close to the first ED we saw, which was very Lucy centric. Nothing original animation wise, and the song is okay, while not exactly ear shatteringly good. Decent stuff.