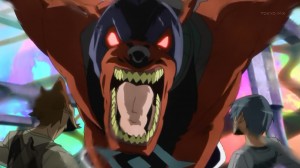 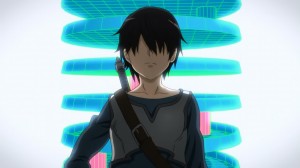 Well this episode proves that being a main character can really demand suffering at times. Kirito making a personal sacrifice in order to eliminate the hate towards the beta testers and allow everyone else to get closer as a consequence. A kind of uniting everyone by making him someone for everyone (including beta testers) to hate. Not that much of what he said was inaccurate, but clearly was done with the intent to make everyone in that room forget about hating all the beta testers.

Only a few months in, but we are starting to see how people are adapting to this situation. Asuna made it clear that plenty are just hiding in the first town inns rather than racing out into the wilds to try and level themselves up. Not surprising since the moment you are told that you’ll die if you lose then a sense of self-preservation kicks in and it’s fight or flight. Of course in a sense it’s not like anything has changed from real life. If they got hit by a car they’d die just the same. Though suppose it’s closer to getting drafted for a war and suddenly realizing just how mortal you really are. While I can understand their feelings about wanting to stay safe, I can also understand where Asuna is coming from. The last thing some would want to do is just rot away. By staying put the person that she is would already be dead. Can see the differences in people who would rather die as themselves than simply survive and lose themselves. 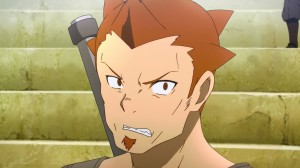 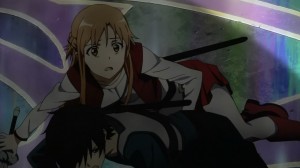 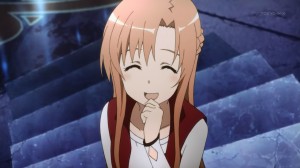 Still on the note of how people react it’s kind of sad how much hate the beta testers were getting. I mean let’s forget about hating on the guy who has trapped them in a world where they will die if they lose and instead hate on the people who have experience. A lot of what Kibaou said was simply guesswork. I’m sure some testers like Kirito were quick to leave that town and move on, but that could be the same for those who had experience in MMOs. Not like anyone looks special because they played in the beta so no way to actually tell. Just assuming because no one said “hey I played in the beta, let’s do some tutorial stuff” that they were all gone. Plenty could be hiding in inns as well just as afraid of dying. I get that people in a stressful situation want someone to blame and blaming someone you can see is easier than a figure that you can’t get to. Still it’s just annoying that Kirito has to take on all this just because that idiot couldn’t keep his mouth shut and had to return to his beta tester hate.

So far I like Asuna and think she’ll be an interesting character to keep an eye on in the series. Can see some similarities to Kirito if only because she’s not much of a group person either. Hadn’t even gotten into a party in those two months and just survived on her own. Think she wasn’t in the beta and simply left the town because she hated seeing those who were too afraid to do anything. The fact she was surprised by how Kirito knew her name seems to reflect that inexperience and yet she is really skilled. Do wonder about the cloak she was wearing most of the time. Could look at it in a few ways after all. Maybe just trying to project that barrier to keep people away. Could also be because she’s a girl and after everyone’s real appearance was revealed could see what girls there are in the game getting approached to join parties and guilds often. Doesn’t seem like she’ll be going in the same direction as Kirito right away though obviously they’ll end up going through this crazy game together soon enough. 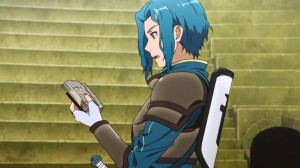 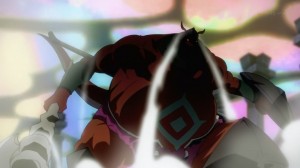 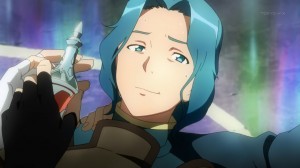 I thought the battle against the boss was pretty well done. Really is something having those game elements mixing in with obviously the very real threat of dying. That familiarity with health bars and parties, but consequences far higher than any actual game. Makes you wonder if some people just ended up dying because they didn’t have their guards up. Easy to forget that it isn’t just a game anymore when you see all those familiar things, especially if their world is similar to now where for a lot of games there isn’t a major consequence for dying. I don’t know, it’s just something that has stood out for me. You see a character’s health bar go down and now have to feel worried about their survival. It’s a very real way to judge the safety of a character.

On a side note at least it seems like for the early part of this game people aren’t going in quite as blind as I thought they were. The beta testers did leave quite a bit of data behind, though as this episode proved things were changed. I’m not surprised that someone who would do this wouldn’t change things up so beta testers wouldn’t have an easy time climbing up even a few floors. At least for this boss some information was available. The higher that everyone goes though the less information they are going to have. Suppose they could have groups going in to scout the abilities of bosses and then running for it, but that’s going to be a dangerous business. The death toll is bound to skyrocket as people run into the tougher bosses with nothing to base their tactics on. Probably only those that can adapt on the fly are going to be able to make it through those encounters. 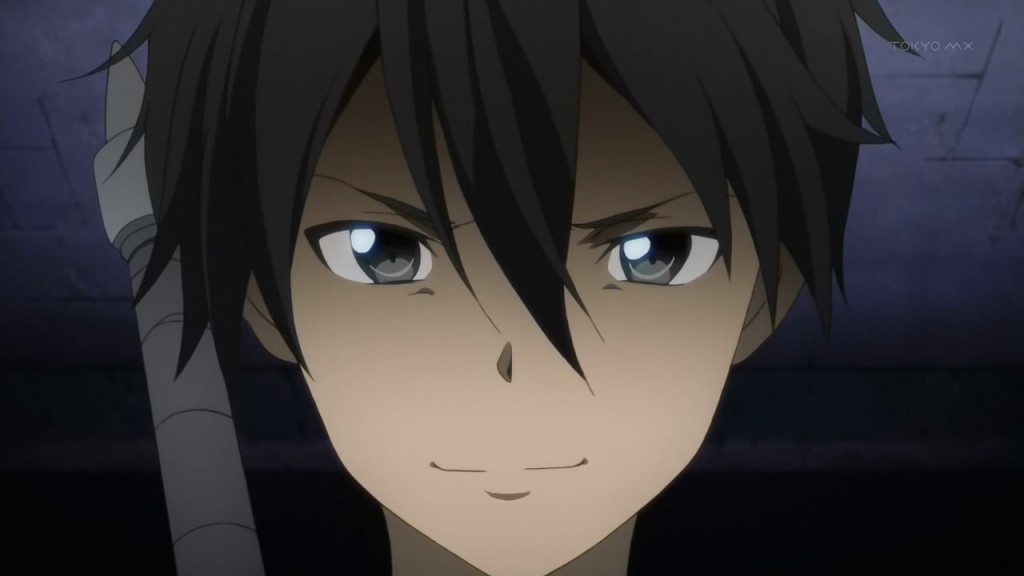 Kirito sure knows how to look like a villain

In the end it sucks that Kirito has to take this burden onto himself. Think he shouldn’t feel too responsible for Diabel’s death. The guy put himself at risk because he wanted that item bonus. Understandable, but even he should know some bonus item from the first floor boss isn’t going to be useful right to the very end. But I suppose every bit counts and when you can’t afford to die even once that rare item might mean life or death. Regardless he charged in there and got himself killed. He was too reliant on either his own experience or what was put in that guide. Even if it meant risking the item he should have gone with the group and in that case he might have been able to survive.

Maybe in the end Kirito’s decision was partly motivated by his self-blame. If he’d been more like Diabel (not selfishly going for the item, but leading everyone) than things might not have turned out like that. At the very least he could make sure that the other beta testers avoided getting any more hate piled on them. It hurts his own chances for survival since no one (at least from his perspective) will join up with him from this point forward. He knows that going solo isn’t going to allow him to make it to the top, but he said all that anyways. On the positive that title of a ‘beater’ actually does sound pretty cool if you don’t know the meaning behind it. Not exactly sure why they bothered calling him a cheater since he simply played a ton during the beta. Anyone could have gone as far as he did if they actually put that time into it. Sad that guys like that who can only blame others (and probably will just get themselves killed anyways) have to make this terrible situation even more stressful for others. Curious to see though how Kirito is going to get through this now that he’s got that stigma attached to him. Also I have to say for a guy who was nervous about meeting Klein’s friends he played the villain quite well. 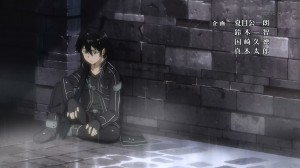 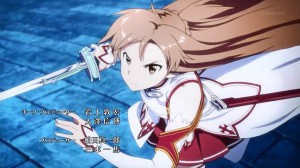 I honestly like the OP. The music was definitely the type that I liked for an OP, namely it was fast and full of energy. Definitely a good way to get into an episode for a series that is likely to have as much action as this one will. A ton of focus being given to Kirito and Asuna which makes sense as they’ve proven to be the main characters for this series. Seems like both of them have things weighing them down though it seems for Asuna the story of her real life before this game should be interesting. Even without the second episode could somewhat understand why these two are going to form a bond. Seem like a couple of people who are pretty lonely. Of course the OP wasn’t just about them with flashes of other girls (either party members and/or potential love interests) and of course some flashes of guys who I assume will be important figures in this story. At least the OP seems to confirm that Klein is going to be just fine and fairly important. 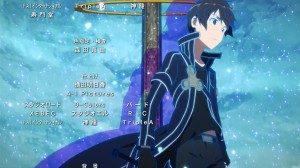 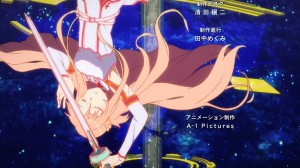 The ED was pretty simple really. Just panning down a screen with Kirito kind of floating in the air above and Asuna inverted below. Not that the series needs to point out that these two are the main characters, but it was a nice touch. The song itself was pretty nice and kind of calming. Nothing special visually, but after listening to the song a few times have to say I like the ED for this show. 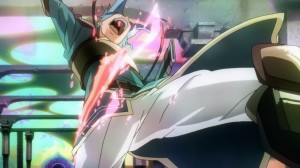 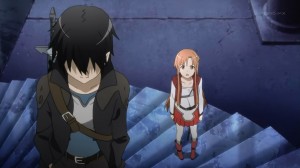 In the end have to say the second episode went well. Got to jump into a boss battle and seeing how people have reacted to this whole situation. Things are only going to get tougher from this point onwards. Just going to look forward to seeing where the story goes and how Kirito and Asuna manage to stay alive in this crazy situation.
Score: A