If there is one thing that the Anime Industry seems obsessed with these days, its exploring sexuality. Even more so, it seems to be focused on young teenage relationships riddled with either “fanservice” or “drama”. It can, therefore, be easily be argued that Anime culture, by far and large, is very sexualised these days. It is in this landscape, then, that Mysterious Girlfriend X stands as not only an interestingly unique series, but an extremely refreshing one at that. 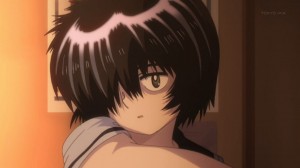 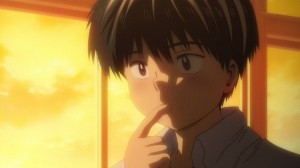 Mysterious Girlfriend X is about two teenagers in high school, Tsubaki and Urabe. The basic concept behind the series is kind of… odd. Namely, the series chooses to replace the regular “kissing” thing with an exchange of saliva.  In essence, Mysterious Girlfriend X is about two teenagers, horny teenagers perhaps? … Getting to grips with the changes in themselves both physically and emotionally, all the while managing a serious long term relationship. Now, with a premise like this, its easy to see how things could go horribly horribly wrong, making this show become nothing more than an extremely odd festishist show (*cough* Nisemonogatari *cough*). Instead of the usual fanservice or extreme drama, however, we are treated to a show that truly explores the teenage relationship mechanic with a refined sense of maturity.

Indeed, what truly makes this series such of a joy to behold is that it doesn’t fall into the usual tropes or situations that the teenage romance genre tends to revel in these days. Tsubaki and Mikoto end up going out from the first episode, and from there on, its more about their relationship and personal development than it is about wondering if the two characters will finally end up confessing to one another. Its a refreshing change of pace, and one that makes the plot and story for Mysterious Girlfriend X a truly unique and wonderful thing and a great exploration of boy and girl interactions within a relationship. 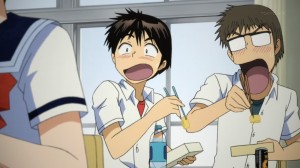 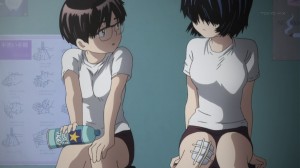 At the same time, what will probably throw quite a few viewers off is the whole “drool exchange” concept, or the rather visual nature of it. Meant as symbolism for kissing, it gets to become quite weird as things like “communication of feelings and thoughts” seem to go with the whole idea. It will undoubtedly be hard from some to suspend their disbelief or not just be plain grossed out by the whole idea. The whole concept is definitely an odd choice, but it definitely gives the series its own strange identity. What’s tragic is that some viewers will be jolted out of the series, before they get to see what truly makes it so special.

It definitely helps that Urabe Mikoto, the main female lead in this show, is quite simply put, weird. Its an interesting parallel that is drawn with reality. It is definitely about how different girls can seem to boys at that tender teenage age.Echoing the point further is Tsubaki, who is your typical guy, likable and very relatable. In fact, Tsubaki seems to definitely be similar to protagonists from the 1980s era romance shows (Kimagure Orange Road definitely comes to mind). Strong supporting characters like Urabe’s mischievous friend Oka, Tsubaki’s best friend Ueno, Tsubaki’s cool older sister Youko and eventual love rival Hayakawa round up the cast. Its definitely with these characters, that the series is truly able to explore some interesting subject matter so well. 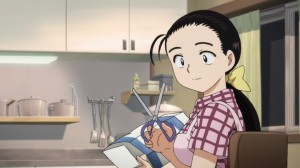 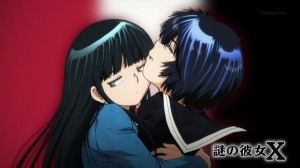 Art and Animation wise, the series definitely feels like its a hybrid between a modern series and a series from the 80s. The backgrounds, environment, lighting and general art style are all exceedingly modern, while the character designs do seem to draw heavy inspiration from the glory days of the 80s romance drama era. Its definitely an interesting combination, and adds to a slightly more oddly realistic take on mostly everything that the anime shows throughout. While definitely drawing inspiration from older anime series, the art style and animation can hardly be called dated, and act as more of a visual choice than anything. At the same time, you’ll hardly find anything in here that will be worth noting for years to come. Mysterious Girlfriend X is a well done series, but the production is effective not through the roof.

The sound work for the series has another interesting combination of old and new. The voice acting for the series is definitely of extremely high calibur, yet it definitely feels a lot more human and normal than the sometimes grand performances we’re used to in anime today. It definitely feels like, once again, we’re back in the 80s era of Anime, where voice acting was quick, realistic and less theatrical. This, combined with a very fitting soundtrack and OP/ED set, make for great overall sound direction. 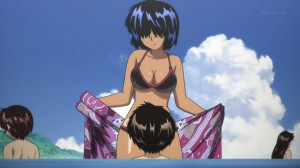 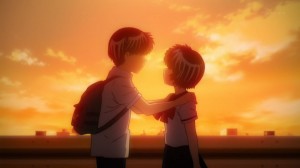 What it boils down to is that Mysterious Girlfriend X is a strange show. It definitely has some odd idea floating around with the whole drool thing, and yet it tackles some extremely common ground with a mature, refined and refreshing take. Mysterious Girlfriend X is probably not for everyone, but for those that do end up be taking by its mysterious, unique style in both story and artistry, there is a great show to be had. The mere idea that this show can cover high school relationships and be so refreshing and unique is an accomplishment in and of itself. We give this series a B+Grade.