And thus ends one of the greatest and most impressive series of the year. Its not a stretch to say that Fate/Zero was a series that really fired on all cylinders, delivering excellent characters, an intriguing and highly unpredictable plot and some truly high end production values to truly match. I think its even safe to say that Fate/Zero is currently the pinnacle of the anime medium (at least until something better comes along in the future).

Before I get into my overall series thoughts, I’ll comment on how well done this ending is for the series. It neatly and nicely fits and connects all aspects of Fate/Zero with Fate/Stay Night, leaving no plot holes or contradictions from what I could see. It was pretty sweet. 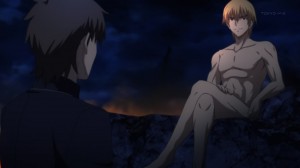 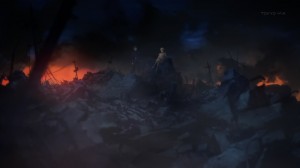 If the first episode of the series was the “first act” and everything preceding was the “Second act” then the final episode is the story’s ultimate third act. It was definitely great to see where all the characters ended up after the war was over. Kirie finally became one with his twisted self, and his combo with Gilgamesh became finalized. The ultimate villain for the series was expertly crafted, as Kirie had been mostly soul searching for the entirety of the series, ultimately becoming the sly devil that would face Saber and Shirou.

On the flip side, Saber and Kiritsurgu had very different endings. Saber was sent back to the moment that defined her Holy Grail spirit version, full of regret for not only not understanding Kiritsurgu, but more so, everyone that was under her. It was interesting to also learn of Lancelot’s reason for madness. Guinevere, Arthur’s queen in the legends, apparently had an affair with Lancelot. Of course, to Arthuria Pendragon, it really didn’t matter because she was a woman anyway. It was simply a tragedy brought by the fact that Saber was a woman, and didn’t really care about losing her “wife”, since the whole thing was a farce. Of course, had Arthuria trusted Lancelot, she could have told him the truth. Then again, her standing as a leader and king would’ve fallen, so I guess Saber was in a no-win situation no matter how you slice it. 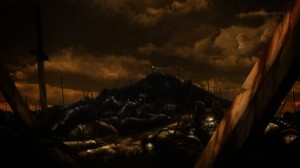 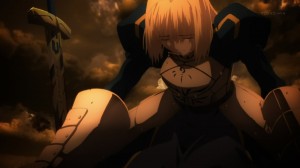 Added to that, Kiritsurgu never was able to tell her what exactly happened with the Grail… so yeah. Saber was a tragedy from start to finish, being shafted by literally everything. Its amazing how broken the woman is by the end of Fate/Zero, because you can’t really ever learn the extent of the damage on her in Fate/Stay Night. For people who’ve played the original Visual Novel, it makes even more sense why the “True Ending” is the true ending after watching this series and its conclusion for Saber. 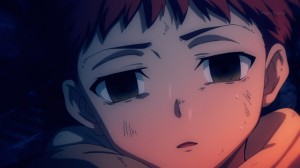 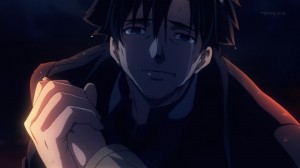 Now, while Saber suffered till the end, Kiritsurgu actually learned from what happened and got out of the cycle of his infinite mistakes. I’ve got to say, the scene of Kiritsurgu finding Shirou and saving him as made as epicly as I imagined it playing out from the VN. Yes, we saw a glimpse of it in Fate/Stay Night, but not to the degree of actuality that this episode showed us. 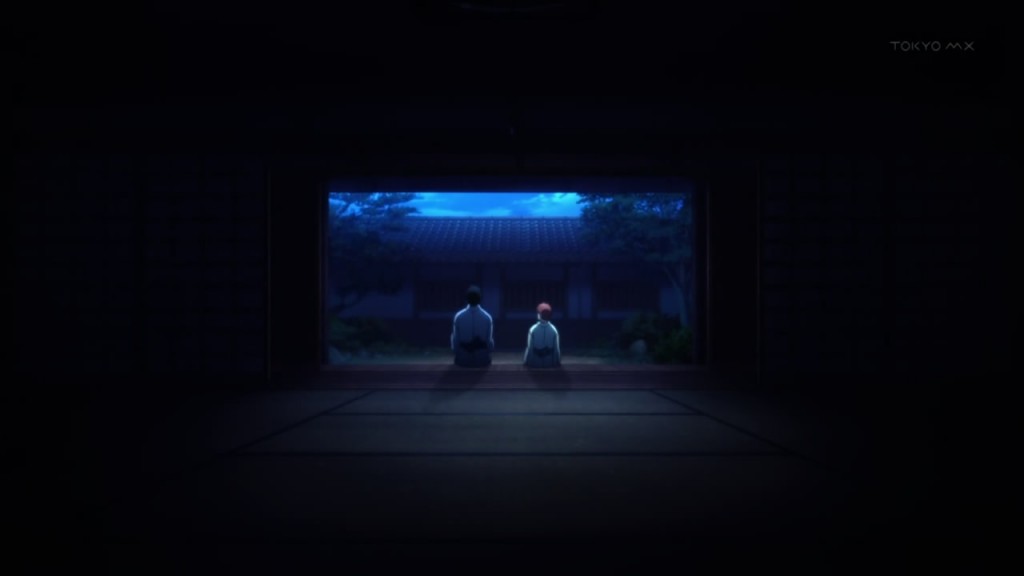 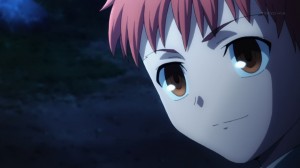 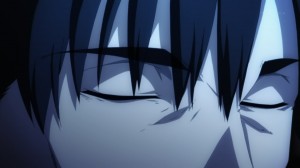 The true ending of Kiritsurgu’s character arc though, happened in the very last scene of the show, where he pretty much admitted to both Shirou and to himself, that he had actually wanted to be a “Hero” (Or an Ally of Justice). In essence, he answered the one question that’s been ringing in his head forever, what he wanted to become. In many ways, Kiritsurgu’s entire life was a struggle to figure out how to deal with the hideous world he lived in, while constantly denying his “wish” to become a Hero that could save everyone. Although Kiritsurgu never could become the Hero he wanted to be, he did pass on his wish and ideals to his adopted son Shirou, and we all know how that story ends. I think the inner conflict that Kiritsurgu is pretty darn awesome, as far as writing goes, with probably the conflict that Shirou has in Unlimited Blade Works being able to slightly top that. If you haven’t seen UBW, and you enjoyed this series, I highly recommend you check that movie out. 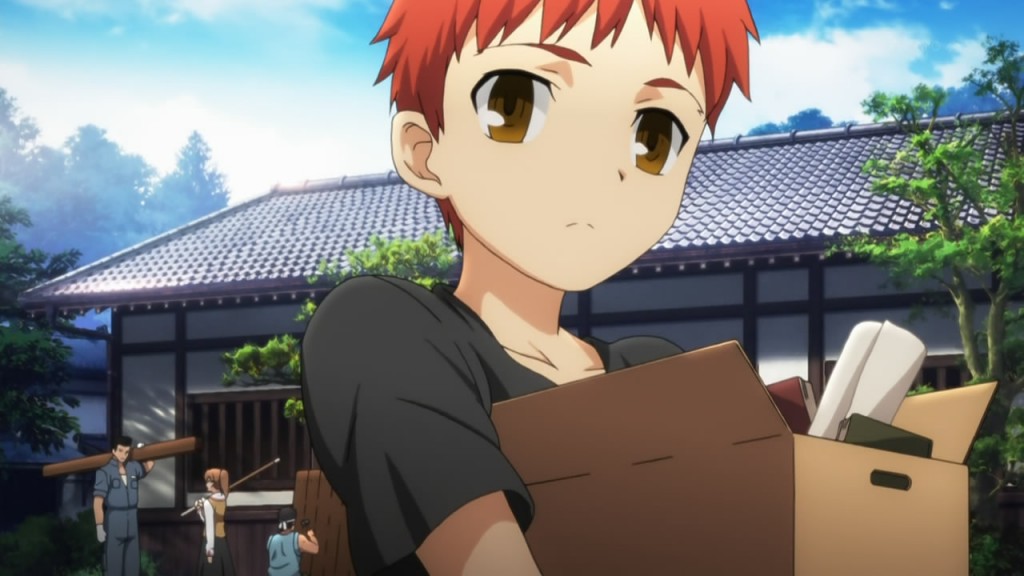 Anyway… The scene with Kiritsurgu building his house and seeing a cameo of Taiga as she’s swinging around her Shinnai (Kendo Stick) was pretty sweet. We also found out why Kiritsurgu never got Illya back, simply because he could never enter the magical field of the Einzeburgs again. Makes sense, and is pretty sad. Overall though, Kiritsurgu I feel like, got the best ending from the events of the Holy Grail war, which is saying something. For those curious, the curse that Kiritsurgu gets from the will of the Holy Grail (Angra Mainyu) is what eventually kills him, and why he’s not alive in Fate/Stay Night (something that wasn’t mentioned in either series or the UBW movie) 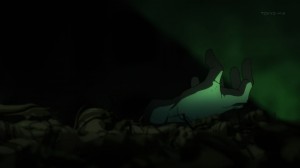 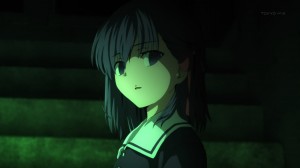 Kariya ended up returning to Sakura, thinking he had saved her but ultimately died while being consumed by the bugs, all while an extremely CREEEPY Sakura looked down upon him saying: “Idiot, that’s what happens when you disobey Grandpa”. 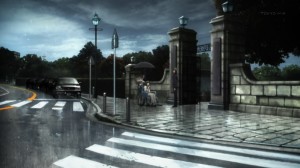 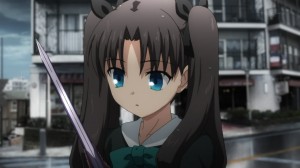 Rin ended up with a mentally damaged mother, and her father’s killer as a guardian. As Kirie hardly gives a damn about anyone but his own brand of suffering, Rin is mostly left to fend for herself. 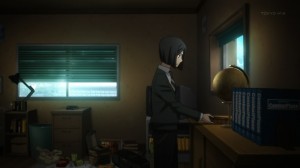 And lets not forget Waver, who ends up deciding that he’ll go on a journey across the world.

Yup, all the bases covered, this is as perfect of an ending as you could’ve had to a prequel story. 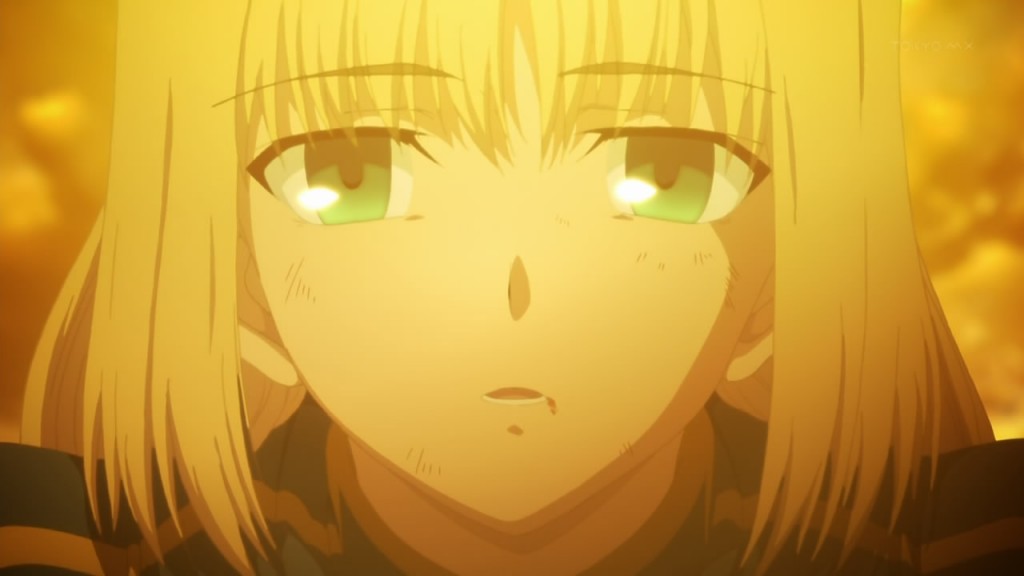 While I generally look at a series as a whole in the full series reviews, those mostly have to be spoiler free and slightly more professional, so I’d like to throw some other things I want to say, out there right now.

One thing that I think makes Fate/Zero so powerful and impressive is how decidingly mature the story and characters are from Fate/Stay Night or even Unlimited Blade Works (which is still pretty awesome). I think the reason that Fate/Zero feels a bit more mature and more nuanced is because the entire cast is mostly adult, save for maybe Waver. The battles and conflicts are a lot more adult like in nature and the tragedy is of Shakespeare level, maybe even a touch beyond it.

So… I’m really going to compare Fate/Zero to Shakespeare huh? I guess so! I’d say I found Fate/Zero tragedies, which clearly outnumber the amount of happy endings, to be superior to even the father of English Literature’s stuff. Why? Simply because the motivations of the characters made a lot more sense, and were steeped in their pasts, personalities and how they acted. More often than not, what cruel fates befell the characters were not just as a result of their own stupidity, but rather, simply the fact that they were not larger than life, and had things thrown at them that they could not comprehend nor could they understand.

This was especially true for most of the heroic spirits in this battle. Berserker, Saber and Lancer, were perhaps the most tragic of the bunch, each being manipulated and used by their masters without really having much of a say in the matter, and suffering a truly tragic and cruel fate at the end. And those are just the spirits. In terms of people, the whole thing between Kariya and the Tohsaka family was just… Tragic. There’s no real way to describe it, except that much like Shakespeare, a lot of the tragedy was because of how stupid Aoi and Tokiomi were. I think, we’ve all discussed this topic in the comments at length, with some truly insightful discussion, so I won’t touch on that any further.

Then of course, I have to comment on Kiritsurgu’s beautiful character arc, that truly had him go through an evolution throughout the series. I’d say that while the series hero will always be Shirou, and in essence, its the second generation of heroes (Shirou and Tohsaka) that end up cleaning up the whole Holy Grail mess, I will say that Kiritsurgu as a protagonist and character is more likable and interesting. I remember when Fate/Stay Night aired, that a lot of people couldn’t stand Shirou’s preachy nature, and while I liked Shirou, he’s just not as cool or interesting as Kiritsurgu.

Kirie’s transformation was also a joy to behold, and really clued us into what I felt was a sort of weak villain in Fate/Stay Night. A lot of the problems I’ve had with Kirie is that I really couldn’t understand his motivations for all the chaos and tragedy he tried to incite. I think Fate/Zero does a terrific job of developing Kirie, and giving an amazing amount of depth to both him and Gilgamesh.

And Gilgamesh? Man, I can’t believe I actually ended up liking the guy. I absolutely detested the character in Fate/Stay Night, but here, he had some real charm even in his arrogance.

Finally, I’d like to commend Ufotable on the AMAZING animation throughout the 25 episodes. At times, I was surprised I was actually watching a TV series, since this was OVA/Movie quality animation, without any hugely noticable dips in animation quality. I’ve always thought that Kyoani was the best studio when it came to animation quality, but I’d say Ufotable wins hands down, simply because of the nature of the scenes they’ve animated, which have been intense magic effects and large scale, epic battles.

While I will be putting up a full series review soon, I can say this with quite a bit of certainity… If you love anime and mature stories, then there is simply no reason to NOT watch this series. In fact, I think I’m going to proceed to rewatch Fate/Stay Night and then Unlimited Blade Works, just because of how awesome this prequel series is. I think we’ll be hard pressed to find an Anime series that can top this one this year.