Great news for josei/sports show Chihayafuru fans, as the 17th Volume of the manga series has confirmed that a second anime series for the franchise is coming! 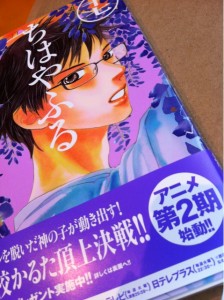 The first season of the series started in October last year, ending early this year. Crunchyroll is, as of this time, streaming it for multiple countries.

Despite being an incredible series, disappointing blu-ray sales seemed to indicate that another season of Chihayafuru would never see the light of day. Speculation by many seems to point to re-invigorated manga sales as the contributing factor to a season 2.

We here at Anime Evo are huge fans of Chihayafuru. We blogged it as it aired and then later reviewed it giving it a much deserved A Grade! Needless to say, we can’t help but be excited for a second series. Arata, Chihaya and most importantly Taichi will be returning soon!