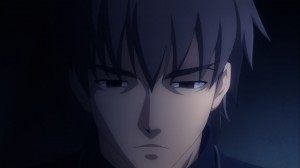 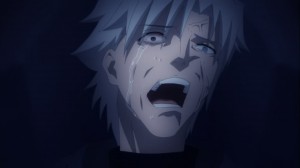 As Kiritsurgu continues his downward spiral, the bad guys begin to truly gain some ground, with Kirie becoming a monster like no other.

Its been a long time coming but Kirie has begun to truly come into the mantle of the series villain, and the one true evil that Kiritsurgu has to conquer. These two episodes largely setup Kirie as the ultimate villain, who toys and destroys his opponents both physically and mentally.

Note: I must apologize for having to do a double 2-episode review. I unfortunately had exams these last two weeks, and have had to skip blogging anything until I got done with a huge load of projects and finals. And of course, after those were done I had exhausted myself so much that I fell sick. My grades did fine, but AE and Fate/Zero episode bloggin suffered horribly. I apologized greatly for this.  I should be back for the remainder (5 more episodes? XD) of the series and be putting out my posts in a timely manner. To those that are still bearing with me and reading these reviews, well, awesome and Thank you! Lets all enjoy this series to the end!

What’s impressive is how Kirie outsmarted  not only Kariya and Tokiomi but how he also totally sent Kiritsurgu around in circles, slowly destroying his entire support network and making him expend energy against other foes before Kirie inevitably attacks him himself. 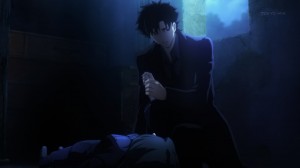 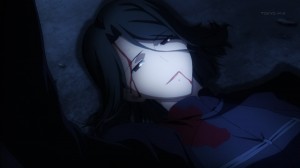 We had a total of three deaths in these two episodes, the first was Maiya’s. In terms of all the characters, I think Maiya is the one who lacked the most nuance and depth. Its not that she’s a bad character per say, its just that she lacked any amount of depth or interesting flaws that would make her sympathetic or relatable. From what we learned, Maiya was obviously a lot like Kiritsurgu, a natural born killer, one that was waay too emotionally broken and then saved to some degree by the already pretty broken Kiritsurgu.

The difference between Kiritsurgu and Maiya, is that Kiritsurgu still has some semblance of emotion and humanity, as we see when he goes to find Maiya moments away from death. Wbat  Maiya says to Kiritsurgu cannot hold truer, as he does definitely seem like he’s about to break down and lose it. Fortunately, with Irisviel in enemy hands, and Saber giving chase, Kiritsurgu has barely any time to mourn the death of one of his closest allies.

I guess in many way, episode 20 felt like a final going away scene for Irisviel as well. She ended up returned Avalon, Excalibur’s sheath and giving Kiritsurgu his final words of encouragement. She also admitted how little she truly understood of Kiritsurgu’s ideals, and whether they were right or wrong to Maiya. Its pretty obvious that Irisviel is another broken soul that Kiritsurgu gave some happiness to and saved despite how truly destroyed he himself was.

Of course, while Kiritsurgu and Saber planned to take on the weakened Rider, Kirie was hard at work taking advantage of the confusion. Clearly having the advantage, he used Kariya’s berserker;’s transform ability to fool Saber at least. While Kiritsurgu easily deduced that it was not Tokiomi (whose house he investigated prior to the attack on Irisviel) or Rider’s master, even he was thrown off when he finally found out through one of the Matous that it was Kariya and “a supervisor from the church”. Everything came to Kiritsurgu at that point, but it was already pretty late.

Now, Kiritsurgu has expended a command spell in trying to get Saber to save Irisviel, and he’s lost both Irisviel and Maiya, the only two women who understood him and were his allies. Now all he has left is saber, who he still hardly respects and calls “his puppet”. Indeed, it was pretty chilling to see Kiritsurgu’s true opinions of Saber in a moment of extreme emergency. Quite a bit different from Rider and his Master. 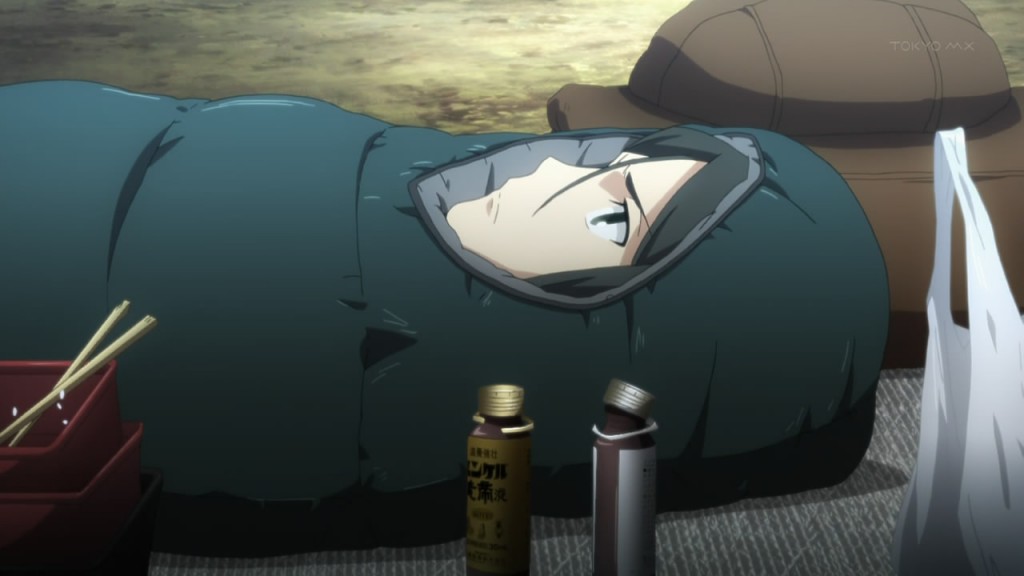 Rider and Waver’s duo has steadily grown on me in this series. The true have truly become partners, learning from one another, supporting one another and helping each other’s weaknesses. More than anything, the two are perfectly in synch, and it was pretty surprising to learn that Rider had been using his own Mana reserves until now. Truly a monster, but that makes the battle quite problematic. Both Saber and Archer have a ton of mana and destructive force, while Rider has all but used up his.

To make matters worse, Saber ended up destroying Rider’s chariot in their grand chase battle. Again, Animation Studio Ufotable doesn’t disappoint, showing us a truly jaw dropping battle on the road. Truly amazing, the whole transformation sequence of Saber’s bike was pretty darn awesome, as was the unleashing of Excalibur a second time. 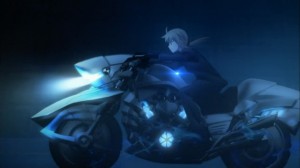 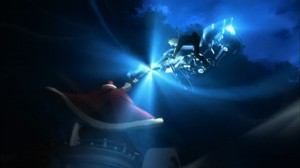 Of course, with that little skirmish, Rider is now at a disadvantage since he’s lost his chariot and can now only use his Noble Phantasm once more.

And while the two “good” masters seem to be losing ground, Kirie totally decimates Kariya in what is truly a scene worth of Shakespeare’s own brand of tragedies. The clear inspiration from Shakespeare is not lost on the writers either, as Archer clearly references the whole scene as a play.

What’s sad is that Kariya clearly becomes the ultimate victim in all of this, and in the process, ceases to be the good guy that probably everyone was rooting for until now. In this episode, Kariya finally succumbs to the despair of all the pain he’s felt, both physically and emotionally. 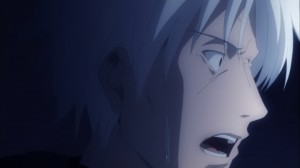 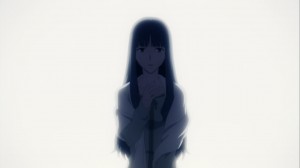 It was absolutely, horrible, heart breaking, to see Karira arrive in the chapel, fully intending to kill Toikiomi, only to be denied that and then have the woman he loves come in and mistake him from doing the deed. Indeed, Kariya was framed for a crime he intended to commit, but as much as he hated Tokiomi, even he wouldn’t do it infront of his wife and the woman he loved.

The final straw that broke the camel’s back came in the form of Aoi, the woman Kariya was ultimately going through so much torment for, saying that he had never loved anyone. That literally drove Kariya to madness, and he ended up killing the very person he had loved so dearly. Clearly, Kirie saw the most ultimate form of despair for Kariya and made it a reality.

Now… While its easy to feel disappointed in Kariya, I’d say the guy was really dealt the worst deck as far as life goes. He loved a woman who was a naive idiot, who never noticed that there was a much nicer man in front of her the whole time, who dearly loved her. She allowed one of her daughters to be given away, and loved a man who was more obsessed with being a magician than a father. Added to that, she had the gall to blame Kariya for Sakura’s predicament? 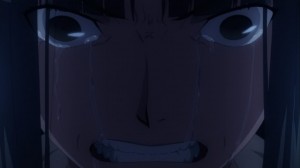 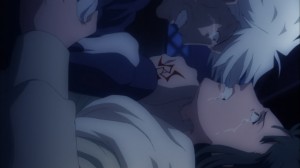 “Was taking Sakura not enough for you?” Really woman? REALLY? That was the one thing I thought as she angrily lashed out at Kariya. I felt extremely sorry for Kariya, and it was heart breaking to see the hero finally give in to his despair and walk the path of darkness.

And while this entire scene played out, Kirie enjoyed it with a glass of wine. He relished it, and truly destroyed a man who really hadn’t had that much in life to begin with. 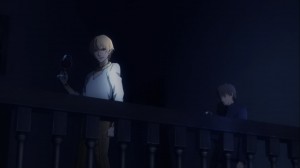 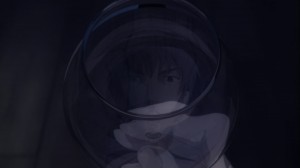 And with that, we’ve probably seen the end to Kariya’s major story. I don’t know what he’s going to do from here on, but the major battle is a three way showdown between Saber, Rider and Archer (along with their masters) and I can say this, things aren’t looking to great for anyone who isn’t on Kirie’s side. 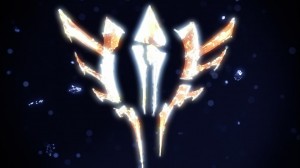 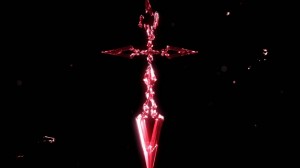 Seems like Kiritsurgu finally realizes the danger that Kirie poses, while Waver uses a command spell? Also Kirie seems to be in despair? See you all next week!