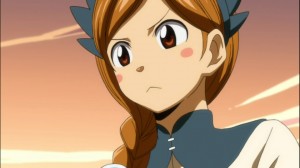 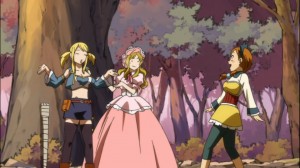 Technically this is a triple review, but since I half started on episode 129’s review during exam week before things got hectic, I’ll leave that as a seperate one. To those curious, I unfortunately was in the thick of exams for the last couple of weeks and have as such, had to go on a temporary emergency hiatus. Soon after said exams, I got extremely sick from all the all nighters I pulled to get stuff done. My grades did quite well, as I aced most of my classes and final projects, but AE and my Fairy Tail blogging has suffered greatly for this. I apologize intensely, but I’m back, and with this week, should be back on top of things.

So… having seen three episodes in a row, How do the fillers kind of stack up to an actual manga arc? Well… I will say this, the fillers this time seem to have a lot of effort and thought behind them. Are they as good as the manga arcs? Definitely not. Are they without their problems? No not really. But at the same time, they are pretty decent and hold your attention throughout the episode itself, even if you’re not overly excited about what’s going on.

Episode 130 opens up with Earthland versions of Hughes, Coco and Sugarboy attacking Fairy Tail and totally decimating them. As of late, its been hard to imagine normal villains being able to stand up to Fairy Tail’s awesome group, especially after they just took down Grimoire Heart in the last arc. So what does the filler arc throw at us? Some re-used characters with some really freakishly overpowered powers. I’m not talking about freakishly overpowered in a cool way either, they’re just annoying.

In fact, if there’s one thing that these two episodes echoed, its that these characters have all but been designed to  specifically counter Fairy Tail’s various members unique powers. 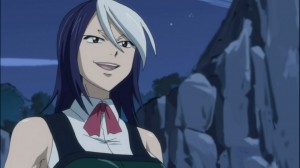 Hughes for example, who is hilariously a female in Earthland, has the power to friggin take control of people. That’s pretty darn annoying, especially since she can pretty much take control of anyone, and there’s really no way to resist it. Its like the guy from the Tower of Heaven Arc, except that guy needed to encase you in his hair to make any effect. Of course, the flip side to Hughes’s power is that she can only affect humans, but as Lucy finds, that isn’t much of an advantage. 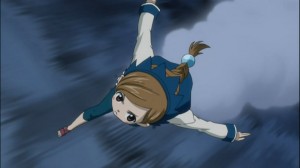 Then there’s Coco, who’s a lot like her Earthland self actually, except that unlike the kind and nice Coco of Edolas, she’s actually quite a little annoying brat. She still runs like crazy, and has “athletic magic”. Seriously, I think the writers for the anime aren’t even trying, adding magic to frigging anything that can be boosted in some way XD. 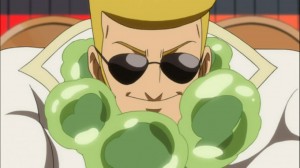 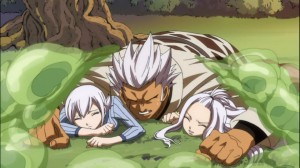 SugarBoy of Earth land definitely has to be the most annoying character of them all though. Not only does he keep saying Spicy every other sentence, but he seems to keep adding in random English words into his speech. Its supposed to be funny I get it, but its just uninspired and annoying. Sugarboy in Edolas was pretty grating himself, and his copy in Earthland just takes it to a new level of argh! And man! That attack is just purely disgusting and very overpowered.

Green goo that can absorb and drain magic while getting stronger? Its just boringly overpowered and annoying.

On the flip side, the one cool re imagined character in this arc has got to be Byro, who looks friggin badass, even if he does rid on top of a giant Squid XD 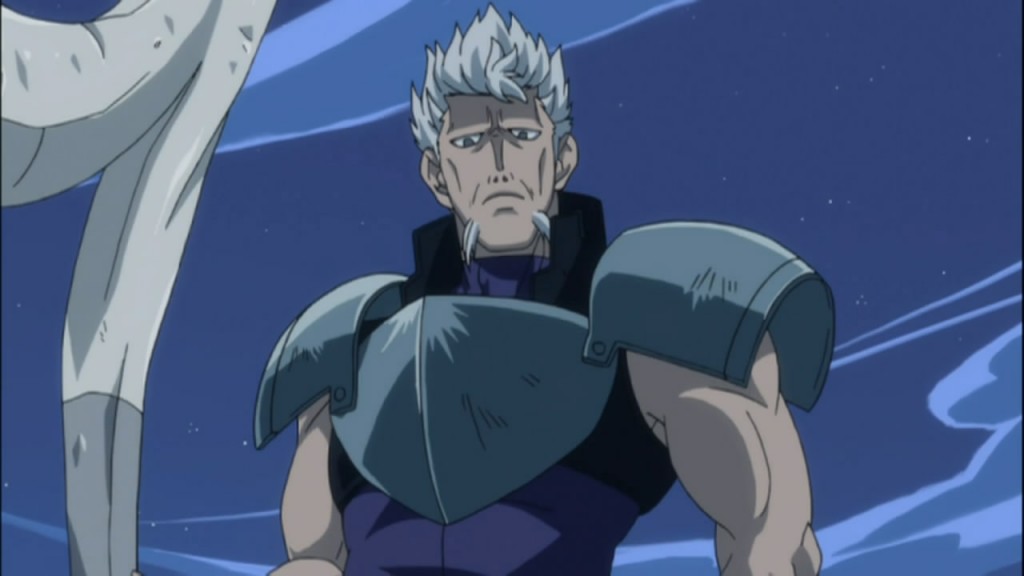 Gildarts goes up against him in these episode, and man, is it an interesting battle. Again, Byro has a pretty annoying ability, he can nulify any magic directed at him, which makes  the overpowered Gildarts vaarious magical power kind of pointless in battle. Again, I totally feel like these characters and more so their powers, were created just to counter some of Fairy Tail’s strongest. Their powers just scream “convenient”. 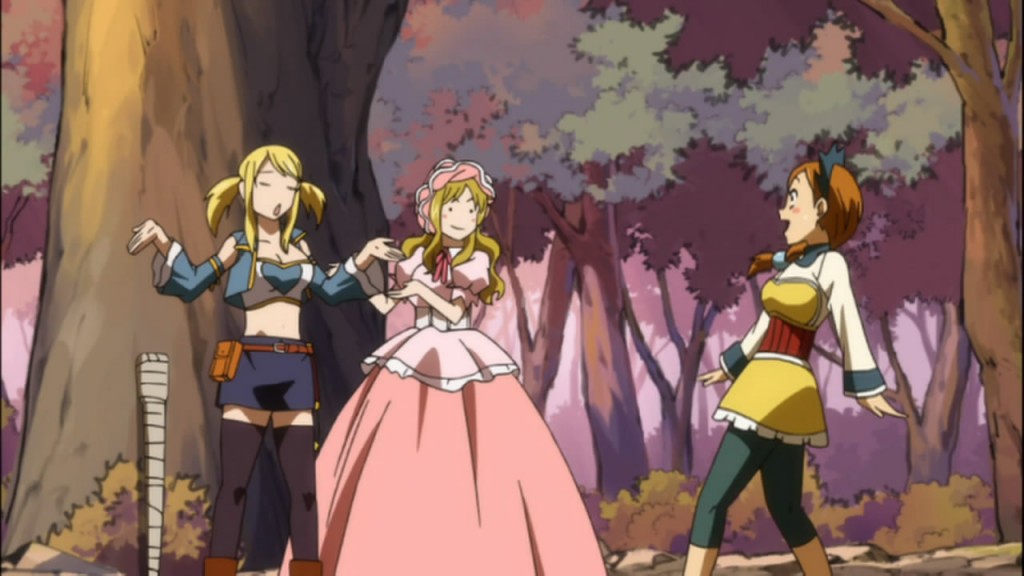 To be Lucy or Not be Lucy? That is the Question!

I did find it pretty hilarious when everyone was like: “I’m Lucy!” especially when Elfman said it too. That hilarity was enough to keep me mildly amused throughout episode 130, especially with Lucy and Michelle trolling poor old Coco alongside Virgo.

That said, we find out in the episode 131 what the objective of the three is, and where they come from. So apparently, all four are members of an odd religious cult, with Byro being some big preist, and they are sent on a mission from their Archbishop to retrieve the Clock Key hand that Lucy received from her father. So this “Legion” or so they are called, just wanted the key? What a damn roundabout way of getting it. Why not just go in stealthy and steal it?

I suppose they didn’t need to, given how strong they are, since Fairy Tail is utterly  dominated by them, well for the most part. Near the end, we have an appearance from Gray and Erza. Gray lends a hand to Natsu, who is taking on Sugarboy. Seems Gray’s ice magic is actually fairly effective against Sugarboy’s green goo. 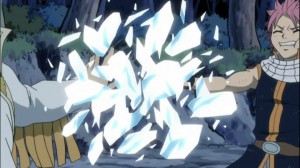 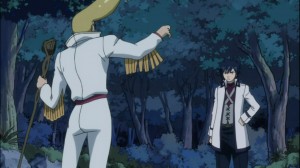 Meanwhile, Since Byro can nullify magic, who better to take him down than Erza, who just uses magic to re-equip herself?Added to that, we have the devilish combo of Erxa and Gildarts, which I don’t know who you are, it’d be insane to take them both on at once. 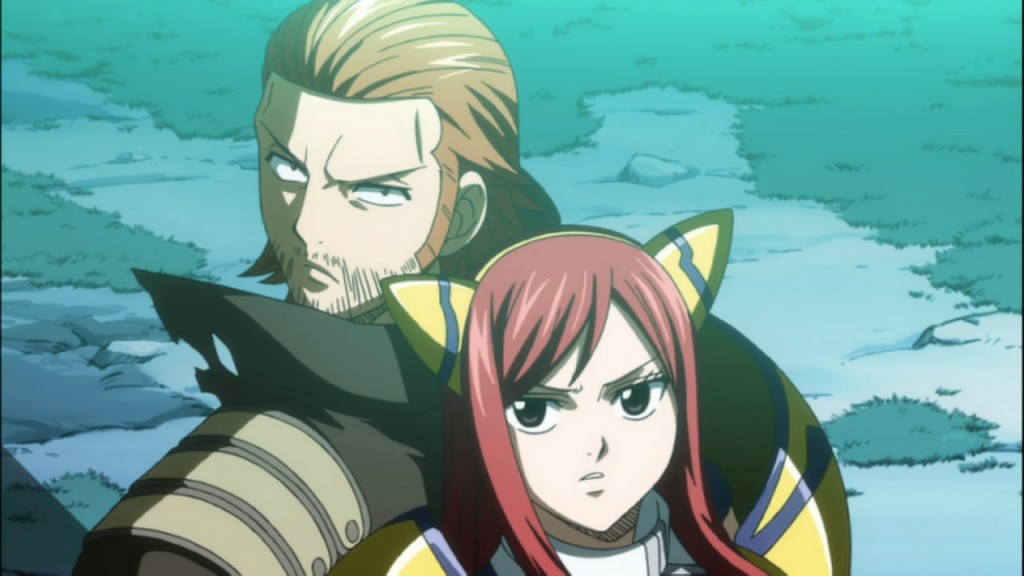 Of course, just as the battle seems to be evenned out a bit, we have none other than Hughes take the key hand from Lucy, and use a signal flare to alert the others. My guess? The bad guys are going to run off with the key and then Fairy Tail will give chase later.

All in all, I just can’t seem to get too excited about this filler. Its got its funny moments, but the plot is pretty cliche, predictable, and honestly, the new characters feel like a missed opportunity than a smart re-imagining of some older characters.

Its not bad, but this story is definitely not Fairy Tail quality, and its a B- at best. Try harder filler arc, I want to like you, I really do… 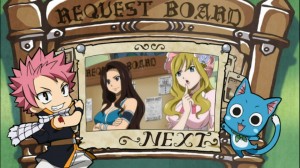 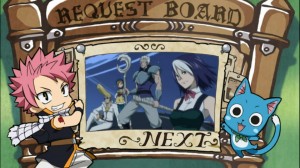 It seems like things are cooling down again, as next week seems to be more about finding out about the Legion than anything. Given that the episode is a few hours away, look forward to the review soon!