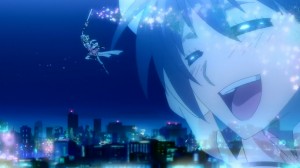 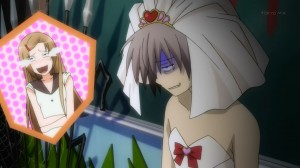 I think this episode was finally the turning point for this second season. Technically things didn’t get extremely serious, but it just felt like the series was moving in the right direction. Finally Mystletainn has come back and that opens a lot of possibilities. With the weapon returned Ayumu can fight again and also erase memories of his humiliating antics. Though it seems Gaia really hates him since it still forced him to crossdress in the episode and not because of magic. Haruna recovering her magic with Eu’s help makes her available for battle as well. Even Yuki received interesting development with that ring that seals the weapon inside of her.

Of course the episode focused on how everything balances out for Ayumu. He manages to erase the memories of him fighting while crossdressing, but instead they dress him up as Dracula’s Bride. That was probably done because he was a crossdresser when the planning for the school festival was being done. Even though the memories of why they would pick him would be erased the decision would still stand. I still say that Ayumu pays the highest price for a harem of any harem lead I’ve seen. How many have to humiliate themselves on a daily basis just to have all these girls around them? 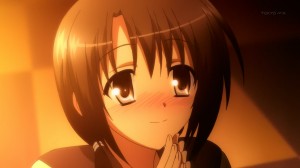 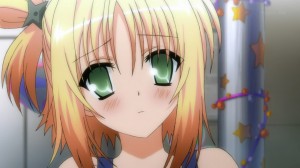 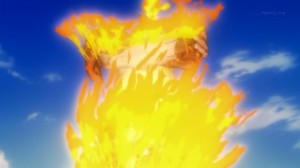 Taeko had some nice focus in the episode. It was expected her role in the harem would increase from the ED and we finally got more scenes with her. The girl is pretty cute and certainly offers a very normal option for Ayumu instead of all the insanity he’s surrounded by. Yes, she is strangely attracted to his legs but there are worse things….Have to agree with Ayumu’s silly reactions that it felt like some idealized school life scene there. She really is a nice girl and so I’m kind of worried if she gets to close to Ayumu. This guy was murdered once after all so his luck isn’t exactly good.

I’m curious about Haruna’s condition at the end of the episode. She created a device that could siphon off some of Eu’s overwhelming magical power and use that to restore Haruna’s power. That sounds all fine until she is suffering from a painful headache at the end of the episode. Strangely enough headaches are a symptom for Eu when she uses her magic. It’s possible that Haruna has absorbed the effects of Eu’s magic on top of just receiving the power. I wonder if she might also suffer from the issue of her words having a serious effect on the world around her. For someone like Haruna who is….chatty that could be a disaster. Either way if she keeps fighting I’m worried about what the effect on her might be.

A more mysterious incident though occurred around Yuki. Someone just happened to send her a letter that lead to the weapon inside of her being activated. Then it just so happens someone comes along who has given Ayumu a ring that will seal that weapon. It seems this was an elaborate scheme to get that ring on to Yuki. Right now we have no idea who sent this ring to her and what their motives were. Was it to help her or does that ring have another function that we don’t even know about? It might be impossible for her to take that ring off which might leave her helpless in a situation where she actually needs that weapon. There are a lot of things wrong with that weapon, but having it not able to be activated is dangerous. Even more dangerous is that Yuki doesn’t even know it’s anything more than a ring. I’m worried that ring might be used even to control the weapon inside of her. This could all be a helpful act to avoid Yuki from going into a meltdown….but it’s just too suspicious to trust the motives of that strange blood puking guy.

But I’ll say good for Yuki that she had some good memories in this episode. The girl is just damn cute sometimes with how she reacts to things. The ring really put her over the edge, but just thinking about confessing really sent her brain into overdrive. She is just crazy in love with Ayumu and really he should take notice already. 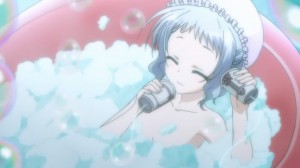 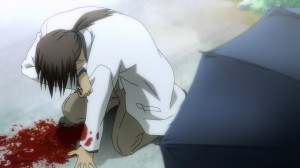 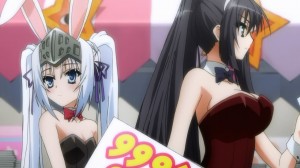 Okay seriously that guy was beyond odd. Anyone would be dead if they threw up that much blood that often. Considering he happened to have a tool that could seal that weapon he’s likely from Haruna’s world. Now the question of course is whether he’s working with Dai-Sensei who is more than familiar with that weapon inside of Yuki or if he’s in league with someone else entirely. This whole situation is fishy and I’m sure Ayumu’s ‘Fairy’ is right in the middle of all this.

The episode wasn’t lacking in fanservice as usual. This time we got a peek at Eu and Sera in those bunny girl outfits and of course Yuki in that school swimsuit. Though maybe the winner this week was Dai-Sensei in the tub. I may have no idea what that person is thinking sometimes, but she does demand your attention. Suppose if you have a cast like that you should make the best use of it. Besides I suspect that is used to balance out the sometimes uncomfortable Ayumu ‘service’ that the series has in it.

Besides the serious questions the episode had plenty to laugh at. I think the series works best when the comedy and serious situations are used in balance. Had a good laugh with Mystletainn’s return. Nothing wrong with the classic Terminator “I’ll be back.” Though it was used a bit too much, I still had fun seeing it come out of that almost Terminator time portal. Good to have that chainsaw back. Also I have to question the intelligence of Haruna and Yuki in releasing that terrible CD. They can be pretty sharp characters in some areas, but in others they are idiots. 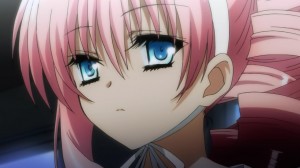 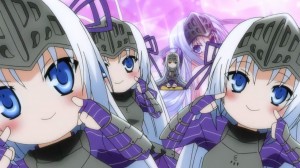 Another good scene from the Eu corner. Think they don’t really need that long of a chant for a transformation magic. Original Eu is probably right in that respect. This might be my favorite episode of this second season because I can get a sense of direction from it. That Fairy of Ayumu’s had a strange look when he talked about his happy times and at the end of the episode. Just what is that girl trying to get away from that is making her drink that much? Anyways I’m looking forward to next week and where things might go from here.
Score: A