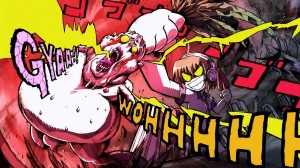 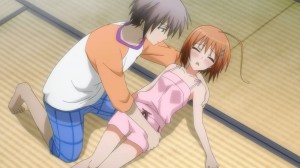 I have to say despite hoping for some more action, I’ll take a Eu focused episode like this any day. While this episode had its share of comedy it focused on something serious which was the Ayumu and Eu relationship. Can’t forget about Haruna either who proved how much she does care and really appreciates being counted on.

In Haruna’s weakened state I’m sure it’s easy to feel a bit useless. Sure, she had a lot of confidence but still not being able to fight on her own has to bother her. All she can do is cook those egg dishes since nothing else works for her in cooking. This time around Seraphim counted on her and made her feel important. Eu being sick was a great chance for her to help out. Of course she had caught a cold herself, but she was still ready to push herself. I’m sure she knew that Ayumu already had his hands full and if she started looking sick then he’d be in a complete panic. Besides, she couldn’t just let go of a chance to be counted on and help Eu out when she was in a tough spot. While she might have been upset at the end for being treated like she was a younger sister she did deserve a bit of spoiling. The most selfish thing she did was push her way into the bed with Eu to share in some comfort. 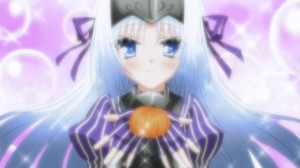 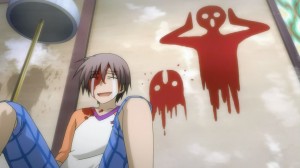 While Eu spent most of the episode sick it was a good chance for her and Ayumu to spend some time together. We’ve had him going all over the place and despairing over his own situation, but this was a chance to relax a bit. Focusing on someone else is sometimes better than freaking out over what’s going on with oneself. It shows how reliant Eu is on Ayumu when it counts. She’s someone who really has had to isolate herself and restrict herself so nothing bad would happen because of her powers. But here she was willing to indulge in Ayumu’s care. Whether it was just having him nearby or going to sleep with him she’s really grown over the past series.

Besides Eu was just pretty cute this episode. When she was just asking to go to sleep with him she was definitely at her cutest there. I’ll give credit to another healthy dose of Ayumu’s imagination. He really went all out from the peeling oranges scene to him mixing Eu’s armor up with the fan…Suppose on that note we can also say that Ayumu’s imagination got him into quite a bit of trouble. No matter how much he tried to sell it the chance to change Eu’s clothes was something he didn’t have pure thoughts about. Though considering how important Eu is to him its not a surprise. She did revive him as a zombie and saved him from being permanently dead. I’m just glad that eventually he calmed down and just focused on being there for her when needed.

I’m really jumping on the talk the Vampire ninjas were hinting at about some threat. This season has been mostly comedy and few serious parts. If there is something big going to happen I’ll welcome it just for the change of pace. Curious to see what might happen. We haven’t seen from Kyouko for a while and now get this possible danger in the future. There is only so much information right now, but I’m sure Ayumu will be in danger relatively soon. 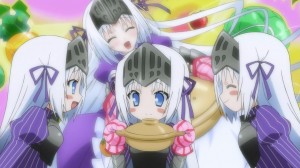 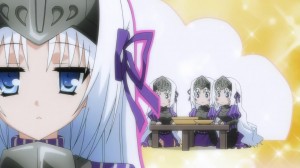 I’m glad after the violent end last time that original Eu made peace with the others. It did reflect how much Ayumu did for her this episode that she would cooperate in cooling down some food for his sake. Nothing like a little bit of peace between Eu’s to cheer you up XD. All in all this was a good episode.
Score: A