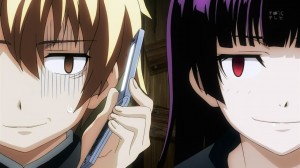 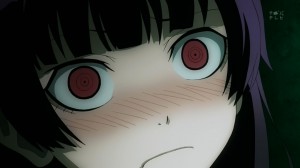 I have to say this was one of the series I was most looking forward to when it was announced. It was another case where I read some of the manga so I thought it would be a good series to keep an eye on. This series is truly a mixed bad in terms of the genres being used in the first few episodes. The series might focus more on romance, or horror, mystery, ecchi, and even some comedy. The focus is all on the main character of the series Yuuko. Teiichi is of course important as the male lead, but everything in the series just circles around Yuuko. While a ghost Yuuko is the driving force since she doesn’t hold a lot back.

There really is a lot of mystery behind Yuuko and her death. While they know where she died after finding her skeletal remains they really don’t know a lot about why she died. Her body hidden away in a cellar in an old part of the school that isn’t used anymore and if that wasn’t enough it was hidden behind a mirror. At the very least some effort was put into leaving her somewhere that no one would go looking. It’s possible she fell into that cellar and simply couldn’t get out, but that seems too simple. The fact that Yuuko’s leg was broken could mean she fell or someone else broke it. Having a creepy shrine in the same area of her body just takes away the ability to believe that this death was accidental. Either someone or a group of people wanted her dead for an unknown reason. Even more creepy is the possibility that this was connected to some kind of ritual. Really have to feel sorry for the Yuuko of that time since regardless of what happened she had to die in a place like that. At least Yuuko right now has amnesia so she can’t recall what happened, but those memories aren’t likely to be gone forever. The frustrating truth is that the person responsible is either old or already dead. Yuuko’s younger sister is the grandmother of one of the main characters. 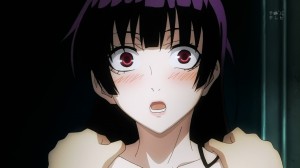 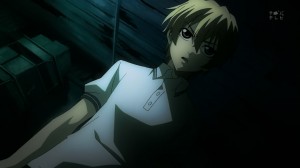 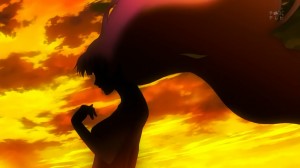 But besides the mystery I just like Yuuko as a character. It’s just hilarious to see her so flustered about her bones being seen by Teiichi, but less so regarding her ghost ‘body’. Guess it’s all about priorities. Guess I’ll have to pass along to the museums of the world that the people running those places are perverts for looking at those skeletal remains. It’s easy to see though how much she cares about Teiichi. With how old her sister must be, it’s hard to imagine living alone like she has all these years. The fact that she doesn’t even sleep just makes those days even longer. Finally though she found someone who can see her for who she is and will touch that ghost body of hers. It’s an interesting way to approach having a ghost character. People’s perceptions of Yuuko will change depending on their thoughts. Teiichi seems to see Yuuko the way she perceives herself, but even his perception of Yuuko could be changed. Someone who thinks of Yuuko as some terrible monster will see just that. If it wasn’t for Yuuko saying so we couldn’t even be sure her appearance was what it seems.

All this and still not having any time to talk about Teiichi. There are a lot of times when Yuuko can just completely overwhelm him. She’s really not too careful about approaching him and even teasing him. It does say a lot though about how he does want to look into the mysteries of the school and learn more about Yuuko. He doesn’t just want to leave her memories as lost things, but figure out the truth. When he pretty forcefully told Yuuko that he would go and examine her skeletal remains I thought he really emerged as a lead character in the series. Besides anyone who can forcefully change their perception of Yuuko with a terrifying form right in front of them is pretty impressive. Besides he’s just a good guy. No doubt he’s just not as imposing as Yuuko, but he’s not some useless guy that does nothing. 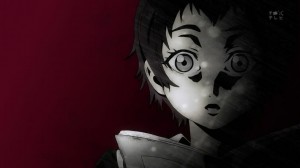 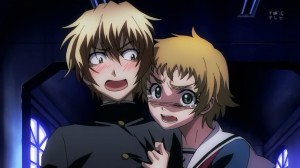 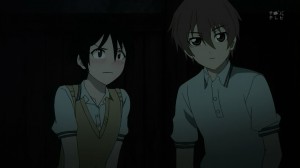 The cast looks to be pretty solid. Of course have the two lead characters, but also a couple of other members of the club that Yuuko has created. Kirie is a relative of Yuuko who can also see her though, their relationship isn’t great. Can get pretty startled when on her own and initially just tried to ignore that Yuuko existed. They do have some similarities except for shorter hair on Kirie’s side and of course smaller breasts than Yuuko. She’s not a bad person since she tried to help Teiichi when she thought Yuuko was actually a dangerous threat. Okonogi is really more of a comical character that keeps things from getting too serious. The girl is pretty oblivious at times even when Yuuko tries to alert her to her presence. Still she is a pretty good source of information since she is really into the mysteries and wants to help Teiichi. That of course makes Yuuko jealous since Okonogi really does idolize Teiichi. Should be fun to see how this group gets along though Teiichi and Kirie try to keep Okonogi from realizing that someone else is in the club room with them.

The show really does enjoy using some stylized visuals. That has helped in making those scenes with Yuuko being perceived as something terrible as legitimacy unnerving. The show has just had fun with showing different points of view. At times you’ll see what the normal person would see which may be nothing or Yuuko as a terrifying force. On the other hand sometimes the series will show what’s really going on which can be more comical than anything else. Long as they avoid showing the same scene twice again in the series I should be able to enjoy that. The series also really likes to jump right into the faces of the characters so you can’t miss their expressions. Sometimes I just think the series really wants to look cool and has some stylized visuals for that purpose. Overall it’s a show that looks pretty good. I’m pretty curious to see what Yuuko will end up being perceived as by other characters that get involved. 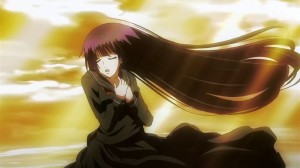 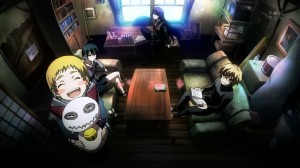 This has to be one of my favorite OPs of the spring season. The song just really has a lot of power to it and makes me want to keep listening. Think I’ve probably started up the episodes just to rewatch the OP. I like them trying to leave the impression that Yuuko herself is singing the songs even if it isn’t her VA doing it. It gives some focus on all of the main characters, but mostly stays locked in on Yuuko and Teiichi. The amount of time that Yuuko spends alone in the OP reminds me about how long she has been by herself before she met Teiichi. The lyrics makes me think about why Yuuko is so forward with Teiichi. With the amount of time she’s been suffering on her own it probably reminds her how important those moments are. Who knows what will happen when Teiichi graduates and leaves that school. Best to enjoy the moments as they come. The song just works and I like the visuals in the OP. The fallen leaves look good and do have some symbolic value. I’d probably check out the series just to see the OP. 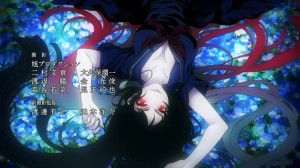 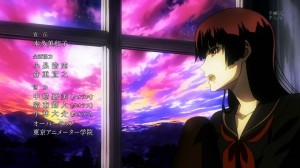 Now this is a case where they really tried to sell Yuuko singing the song. Watching Yuuko sit in the window and just sing. The song didn’t quite jump out at me to the same degree as the OP, but it was still a good song. It’s a pretty melancholy song which is fitting since at the end of the day Yuuko is a ghost and no longer alive. It also works symbolically only showing her since when the school day ends and Teiichi goes home she is utterly alone in that school. The only things she really has available to her are her own thoughts and keeping herself amused. Not sure what would be worse, not being perceived by others during the day or when everyone goes home and you are alone. It’s not a bad ED and overall I like it. 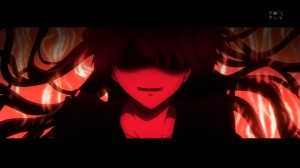 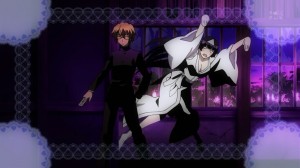 I will delve into some bias and say that this is a show people should give a chance. It is hard to say what one will get in a given episode, but Yuuko is a pretty compelling character. Only reading part of the manga, so can honestly say I want to get to the bottom of her mystery in this series. Think it should be a fun series and certainly never boring with the group that is surrounding Yuuko. I want to know if Teiichi is right about someone twisting the rumors around Yuuko, perhaps to conceal the truth. I’m definitely not going to stop watching at this point and hope others give it a shot.