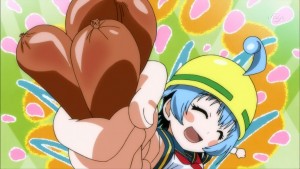 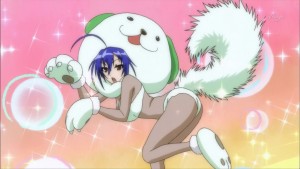 In a sense Medaka Box hasn’t been a major surprise. If there was anything I heard more than the synopsis it was that the manga this is based on struggled early on and had to change to draw people in. I’m starting to see why some people would have had trouble staying that interested in this series. Three episodes in and I’m already struggling a bit to jump into the next episode to see what will happen.

Not thinking that the series has no potential, but there are things that seem to bring the series down. Think in the end it all comes down to Medaka who is the center of this series. Following a person so blessed with skill, talent, and being almost perfect can be pretty draining. Sure she might claim that geniuses don’t exist, but let’s look at reality here. You put two people who have the same drive in the same situation they aren’t going to end up the same. That might be a good excuse for people with a ton of talent, but less convincing for those without it. A way to have their own hard work not negated. Kind of jumping on a random topic here, but something about that just annoyed me. Really her only negative is being rather stupid about some things. There just seems to be nothing to root for in this character. Her biggest struggle is that animals can sense her overwhelming strength and are terrified. That’s hardly something I’m going to get really attached to. 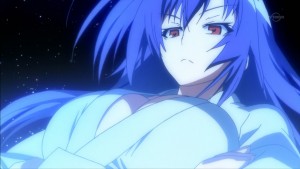 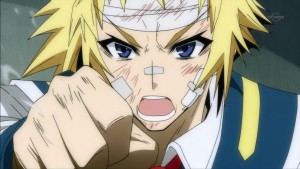 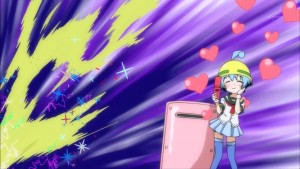 The series does have its share of funny moments. The bulk personally comes from Shiranui who is a great source of information. The girl is pretty twisted looking forward to our male lead Zenkichi get mauled by a dog in one episode. But she’s pretty fun and so has kept me interested in seeing what she might do. Zenkichi is a pretty solid male lead. He’s a guy who has had to follow Medaka around and has built up some solid strength himself over time. A childhood friend who of course is in love with her and thus despite his complaints will stick around with her and be one of the rare people in the world who would worry for such an overwhelming person.

It’s not a fancy series visually, but it’s decent enough. Medaka’s crazy abilities look pretty good in action and that’s part of the battle. It’s just not going to be the best looking anime of the season. There’s enough fanservice on both sides really to leave those looking for that satisfied. There isn’t too much, but people will get panning of the female characters or some focus on Medaka’s breasts. The series isn’t going to turn away from those chances while at the same time telling its stories.

All the voices seem to fit from my point of view. From Zenkichi to Shiranui everyone seems appropriate to their roles including the side-characters that are the focus of whatever problem that Medaka has to solve. 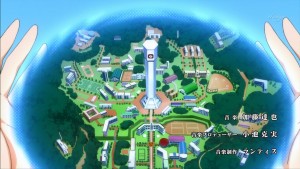 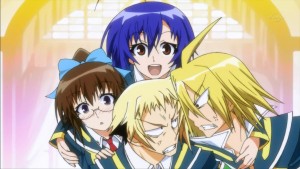 It’s certainly an OP that visually fits with the level of the show itself. A pretty good OP that has the kind of quick tempo that fits with the series. At least a quick glance is given to those who are the main characters of the series. Of course Medaka proving that she is pretty much everywhere. A pretty solid OP all things considered. 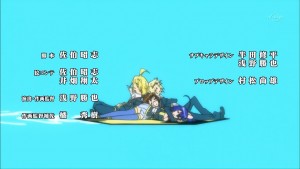 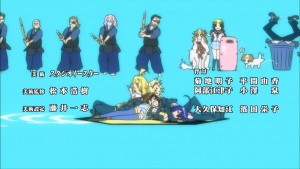 A pretty simple ED. Visually just the student council laying asleep in a pile with still images of people they will help passing above them. The song was pretty nice and had me enjoying that part of it. Though have to say it’s pretty tempting to just look at something else while the song plays. Think it works better as a song than an ED. 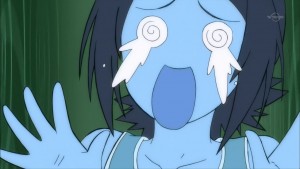 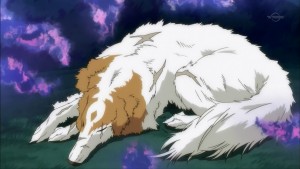 I think Medaka Box has some potential, but right now I wouldn’t say this is a series people have to check out. There are some laughs, but not like there aren’t other series in this season that can give those. At this point still looking for a way to be attached to the main character. Don’t want to drag in personal bias, but never been a huge fan of those super talented people who could literally do everything and won all the school awards XD. So having one above even that as a main character is…yeah. I’ll have to wait and see how the series develops, but right now it’s just something I’ll watch if I have the free time.