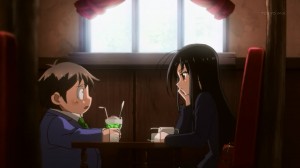 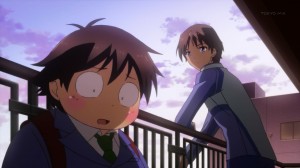 Now Accel World was one of the series I was most curious about coming into this season. It’s pretty easy to get attention with a fairly unconventional main character. Normally don’t see a short overweight guy be the start of a series, but besides that I was curious about where the story might go with this series. It’s not just a series where you can watch the characters go about their lives and be satisfied, things have to be going on and the action has to jump out at you.

Arita, Haruyuki is definitely a different main character at least visually from what we’ve seen. It was an interesting gamble since you can draw in people or turn them away when combined with how much self hate he has in the early part of the series. No shock that he really is down on himself and running away from the real world to spend time in a digital one. Though he’s definitely a person that some can relate to. Trying his best not to draw attention to himself, dealing with bullies, and feeling like a third wheel thanks to his childhood friends being in a relationship. It’s no wonder he wants to run into the virtual world that he’s plugged into thanks to the technology of 2046. Thanks of course to Kuroyukihime (you think a major character would have a more official name than Black Snow Princess) everything changes for Haruyuki. 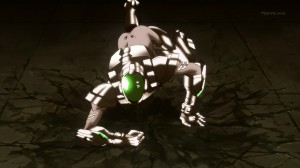 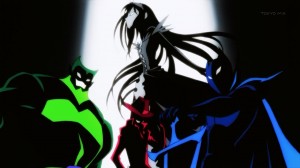 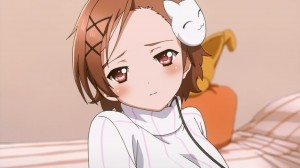 So far the story has been pretty good. They’ve mostly been setting things up since there is plenty to deal with. We have Haruyuki’s school life, his relationship with his friends and Black Snow Princess, and the minor thing called Brain Burst. The ability to almost pause time like that and exit into your avatar body while the program is activated definitely could give people incredible advantages. A piece of cake to copy notes and take advantage of a lot of things. It’s no wonder that people with that ability want to keep it and therefore have to take part in matches in order to gain more points. Of course it also makes them pretty dependent on Brain Burst, so if they lose all their points and the program uninstalls then going back would be very rough on a person. In a sense these fights aren’t life or death since if a person loses they will simply go back to living normally, but for those who have gained such an ability they can get pretty desperate to keep it.

The series really has only had one real fight so far. Interesting that the system itself creates the avatars for the combat portion of the program by scanning a person’s mind. Recording a person’s fears and ambitions and making the avatar from that. So that Silver Crow that Haruyuki becomes comes from what the program read. It read what he was ashamed of. An avatar that stands out and is scrawny. Still despite just being a fighter kind of avatar it’s got some pretty good stats. Every avatar gets a colour which helps predict what their resistances are and their traits. I think visually the fights should be pretty good once we see Silver Crow go up against some more opponents.

The relationship between Haruyuki and Black Snow Princess will be pretty key. Here’s a girl who pulled him out of the corner he’d hidden himself in and got him out of that bullying situation. But I have to say it’s her feelings that was the most important thing here. Why she wants to support him and why she reached out to him. I’m pretty glad they revealed part of her past early so we weren’t left guessing so much. 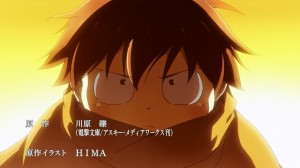 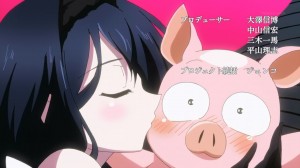 I think the OP definitely fits for what should be a pretty good action series. Visually it’s making clear this is going to be a show with some crazy battles, but also one that focuses on the main character and those around him. The early part was more focusing on Haruyuki, his friends, Black Snow Princess, and at least one character we haven’t met in the first few episodes. The song itself was pretty catchy and I enjoyed listening to it. Unlike some OPs I don’t expect I’ll be skipping over it as the series goes on. 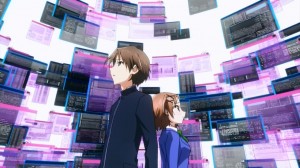 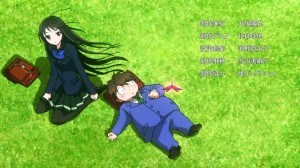 The ED also had a pretty good song. I thought it brought a lot of energy which keeps you listening, but almost think it might fit better as an OP. Since with all that energy all you have is the preview to look forward to and then a break. Still a good song is a good song and I’ll enjoy listening to this as much as the OP. It’s pretty straight forward in focusing in on the main characters of the series so far. Haruyuki and Black Snow Princess close, but separated. Also Takumu and Haruyuki’s other childhood friend Chiyuri are together,but surrounded by windows full of information. Once again a couple characters we don’t know yet appear, but I’m sure they will play a role eventually.

It also shows how rough things might get for Haruyuki. Silver Crow was in a pretty bad state and this reminds me that since these are avatars the amount of damage they can sustain definitely goes beyond what a normal person could take. A nice way to end it though with him waking up and being with Black Snow Princess. 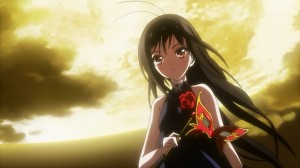 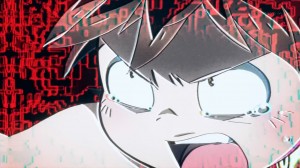 Think the series is building itself up nicely. We’re getting into Haruyuki’s head and getting a better picture of the world he’s getting into. So far they’ve given us a person that plenty could relate to, but someone who has a lot of room to grow. With some time I think this could turn into one of the better shows of the season. In a sense we’ve got a character living in two worlds and I look forward to seeing how he navigates through both of them. So for those looking for someone a bit different as a main character and a show that should have some good action this should be it.