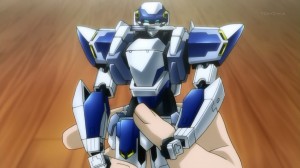 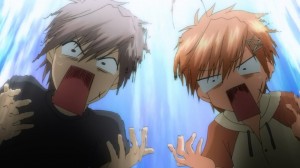 I have to thank this episode for reminding me how much I want another season of Full Metal Panic XD. The start of the episode with Ayumu working on the Arbalest model was pretty nice and just had fun with him and Haruna really getting freaked out when the model broke. Nice touch having Ayumu and Haruna change appearance in that instant to look like Sosuke. Of course on the downside this all reminded me that there is no sign of a new season coming out in our future…But it was still worth it to have Ayumu quoting lines like “I love you Kashim” and both Haruna and Ayumu crying out Sosuke’s name when the model was busted.

This was another pretty light episode in terms of seriousness. Not that I didn’t enjoy it overall, since it let me have some laughs and that’s been the main pull of this second season so far. While I’d like to see more serious plot development, I can still enjoy the series focusing on making Ayumu’s life pretty hilarious. 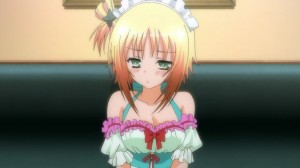 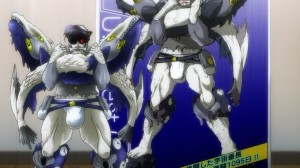 Those vampire ninjas really have to run a variety of businesses to support themselves. Kind of sad that powerful individuals like them have to work in a maid cafe. While some seem to be of the normal kind they also have a pretty niche focus with those verbally abusive maids. The idea that someone like Sera is working there is pretty funny on its own. I expected her to be the last boss of that challenge since she’s pretty tough to make crack. I’m rather impressed Ayumu got out of that without getting his eyes gouged or something of that nature.

I kind of knew that the model that Haruna got Ayumu at the end of the episode was going to be the wrong one. It just seemed to be too easy for them to not take advantage of. The poor guy thought he was going to get a new Arbalest and he got something else entirely. I do wonder where the heck Haruna bought that thing though since it seems like something that is popular where she is from. Oh well it is the thought that counts after all. 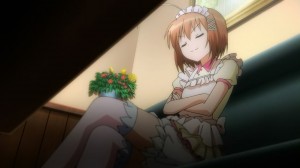 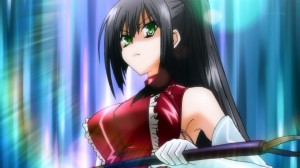 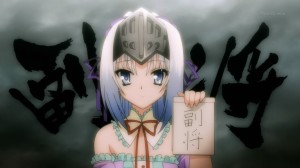 I was wondering for a few moments who the five maids were going to be. I kind of bet that one would be Saras if only because she’d be an easy win due to her Ayumu obsession. Of course once Haruna came out it became pretty obvious. It was pretty fun watching Ayumu use tactics to get the win in each category. He didn’t have to do anything with Yuki though since she’s already obviously in love. The others just took a bit of work and Eu didn’t take any at all. The best was the twist at the end with the student that obviously doesn’t care much for Ayumu. Didn’t think Orito would actually be useful in this kind of situation, but he ended up being a kind of trump card.

Maybe the most serious part of the episode was revealing that Anderson is from the underworld. Someone that knows Eu and is from the same place kind of popped out of nowhere. I’d been wondering about this guy in the back of my mind so I’m glad we got to find out something about him. Now of course I’ve got to wonder if he’s going to play an important role in the plot….assuming it ever gets started. 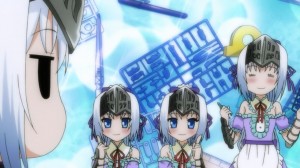 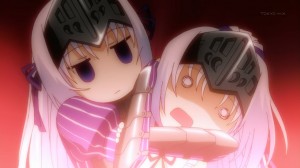 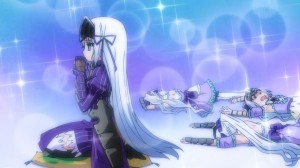 The only downside really is that we’ve spent a lot of time having laughs, but very little setting up the serious part of the story. They’ve already told us it’ll get serious with the Kyouko scenes though so it just feels like they are stalling. But I’ll just choose to believe they want to focus more on comedy and take the episodes for what they are right now.

I probably laughed the most (after being a bit stunned) at Eu just snapping on those inner Eu fantasies. They only showed one, but she quite literally snapped their necks in rage. An important message….don’t mess with Eu! They have been playing with fire for a while now and got burned. Do wonder if they will recover in time for next week since they are pretty entertaining. 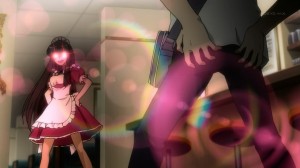 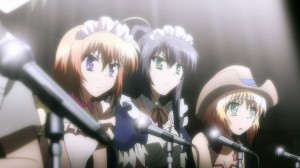 So a pretty solid episode for comedy. Had some laughs, watched some of the girls go dere for Ayumu, and avoided seeing what Sarasvati might do with Ayumu if she ever got her hands on him.

Thought I might as well make note of an event called the Aniblog Tourney. A pretty fun event that puts up different anime blogs against each other and let’s the voters decide who stands on top. Of course the best thing to it is getting to see a ton of blogs you’d never know about otherwise. Take Anime Evo’s opponent Shades of Grey, a really good site that focuses on manga. I’m definitely going to be following though not cheering for them to win it XD. Regardless, if anyone wants to check it out and maybe give us a vote I won’t mind.
Score: B+