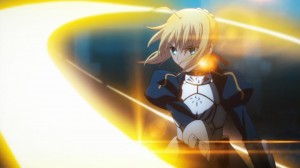 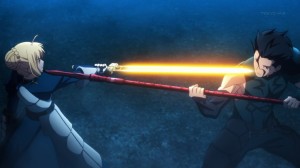 Terminus of Honor is a truly fitting title for the 16th episode of Fate/Zero. If there were any doubts or mysteries surrounding Kiritsurgu and Saber, and their relationship, it was definitely all laid bare in this week’s episode. Some truly shocking and definitive events occurred, and personally speaking, the first major payoff from investing in this series and its characters was felt in this very episode.

Before anything, I’ll apologize for my tardiness with this review. Fate/Zero is a series that truly deserves too be covered indepth, and with as much care and attention as possible. Its deplorable that I seem to be unable to do so well enough. I’ve just been extremely busy as this is pretty much the end of the semester as far as college goes for me. 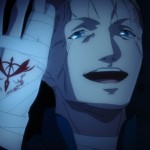 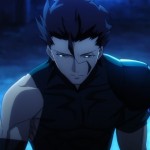 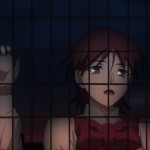 This episode really brought an end to the whole story of Kayneth Archibald, his fiance and Lancer, and dang! It was one very tragic and sad tale. Throughout the series I’ve felt extremely bad for Lancer. Not only was his past life a mess, but his one wish to correct his past life’s mistake and fight an honorable battle while being loyal to his master, was trampled upon, again and again. Generally, the Holy Grail does well to pair up Servants with the masters they need the most, but it seems like it totally screwed over Diarmuid (Lancer) in its choice.

For Lancer, it really was reliving hell all over again. What truly makes this story a tragedy is that most of what led to Lancer’s demise and pain, happened away from his eyes. Sola Ui ended up falling in love with him, and manipulated and screwed over Kayneth. Kayneth meanwhile, totally in love with Sola Ui, blamed Lancer for what was happening. And Lancer, meanwhile, was trying his best to be loyal to his master, stave off Sola Ui’s advances and fight the most honorable battle he could. 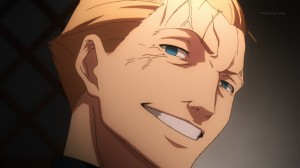 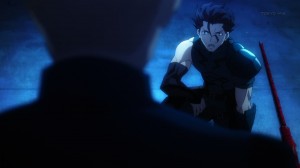 Its really quite obvious that the fall of Lancer was created by his master. Kayneth was a despicable person, but he was also very dumb. He was ready to get his hands dirty, but his arrogance almost always got in the way of critical thinking and adaptability. In opposition to the cold and calculating Kiritsurgu, Kayneth never stood a chance.

And as for Kiritsurgu, we finally got to find out just what kind of man he was, and I’ve got to say, I felt serious chills when I saw Kiritsurgu at work, effectively wiping his opposition so completely and effectively. Kiritsurgu is definitely a machine, taking on every angle, and leaving NOTHING what so ever to chance. There’s no emotion, no sympathy and no honor in anything he does. All those concepts are completely non-existant in the world view of Emiya Kiritsurgu.

Lets break down the plan that Kiritsurgu enacted shall we? 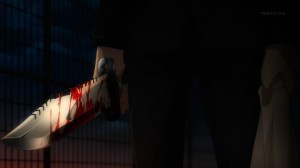 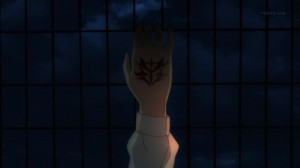 Immediatly after the battle with Caster, who’s master Kiritsurgu himself sniped, he had Maiya work simultaneously to find and deal with Sola Ui. Sola Ui’s hand was dismembered quickly and cleanly, and then she was kidnapped, all before Lancer could even return. 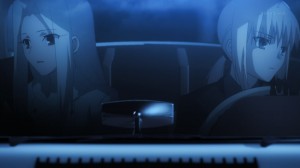 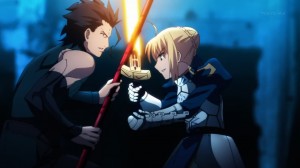 Then, Kiritsurgu found Archibald and Lancer’s meeting spot, and sent Saber and Irisviel there. With Saber’s arm back, you’d think she’d have the advantage. Given how Saber is, however, Saber refused to use her left hand and fight a dishonorable battle. Of course, that was all part of Kiritsurgu’s plan. 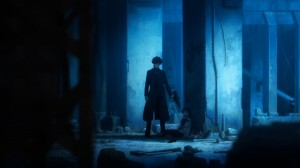 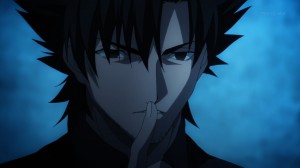 The guy effectively used Saber as a distraction, and ended up threatening Kayneth into a contract in the shadows. Using Sola Ui as a hostage, Kiritsurgu made Kayneth sign a contract that made him force his servant to comit suicide in exchange for a magical bind that prevented Kiritsurgu from killing either of them. 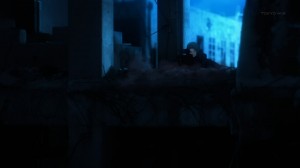 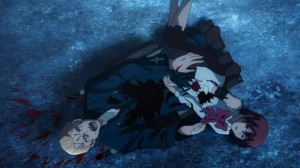 Poor Kayneth, he didn’t even stop to think that while Kiritsurgu couldn’t kill him, there were probably others that could Surely enough, once Lancer was dead, Maiya shot both Kayneth and Sola Ui dead. 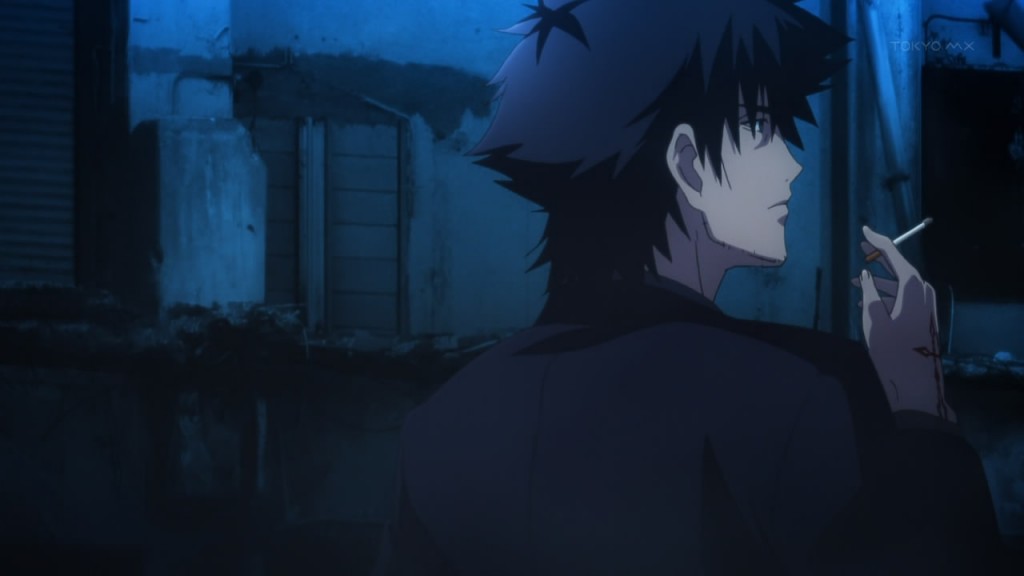 All in a day's work for Kiritsurgu!

Kayneth’s last few moments were pretty pathetic, and extremely sad, even for him. He begged Kiritsurgu to kill him, and Kiritsurgu simply shrugged, saying the contract prevented him. MAAAAN! That’s friggin COOOOLD!

It was eventually Saber who had to come in and put Kayneth out of his misery.And damn, Kiritsurgu acheived all of this without losing any command spells, not having to force Saber to do anything. If anything, Kiritsurgu used Saber like a chess peice.

But before I move into the crux of the whole Saber/Kiritsurgu relationship, Its worth touching upon the extremely sad end of Diarmuid/Lancer. Man… this series has had some pretty great emotional moments, almost making viewers tear up at Ryounosuke’s death two episodes ago, but that didn’t even remotely compare to how sad Lancer’s death was: 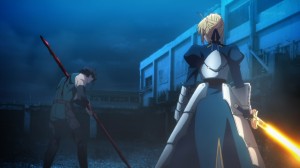 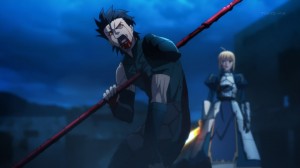 The rage, hatred and pain that the guy felt was so beautifully articulated in this one death scene. Lancer effectively went from an honorable, noble hero, to a total dark hero, burning with hate and regret. The Holy Grail was totally perverted and destroyed him, ruining everything he wished for and stood for. And the questions he asked as he died: 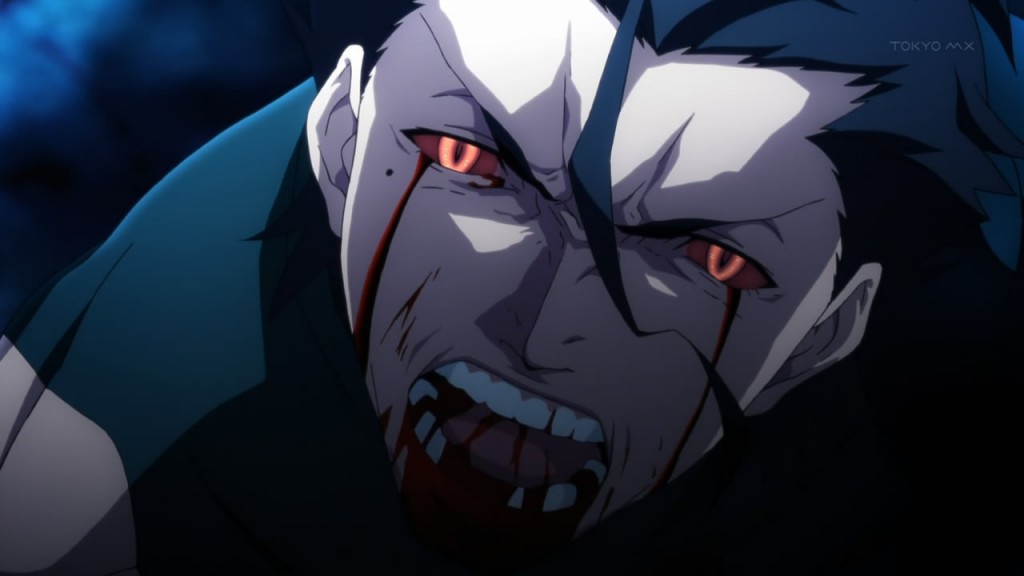 "Do you all really want to win so much? So much that you'd kill the one thing my heart desires? I CURSE YOU ALL!"

I wouldn’t be surprised if this one act by Kiritsurgu was what eventually made the Holy Grail into what it turns out to be in the end. For those of you who’ve seen Fate/Stay Night or played the visual Novel, you’re very familiar with what I’m talking about. Now I doubt this event actually brought about what happens at the end of this war, but it might as well be. The painful and tragic ending we got to witness, was just that powerful.

I rarely praise a sad death scene, but the writing for Fate/Zero, both in  the original novel and the adaption script is so darn impressive, that I’d equate it to some of the best Shakespeare play tragedies I’ve read. Truly bittersweet and moving stuff.

And then, we had the inevitable confrontation between Saber and Kiritsurgu. What a powerful moment! 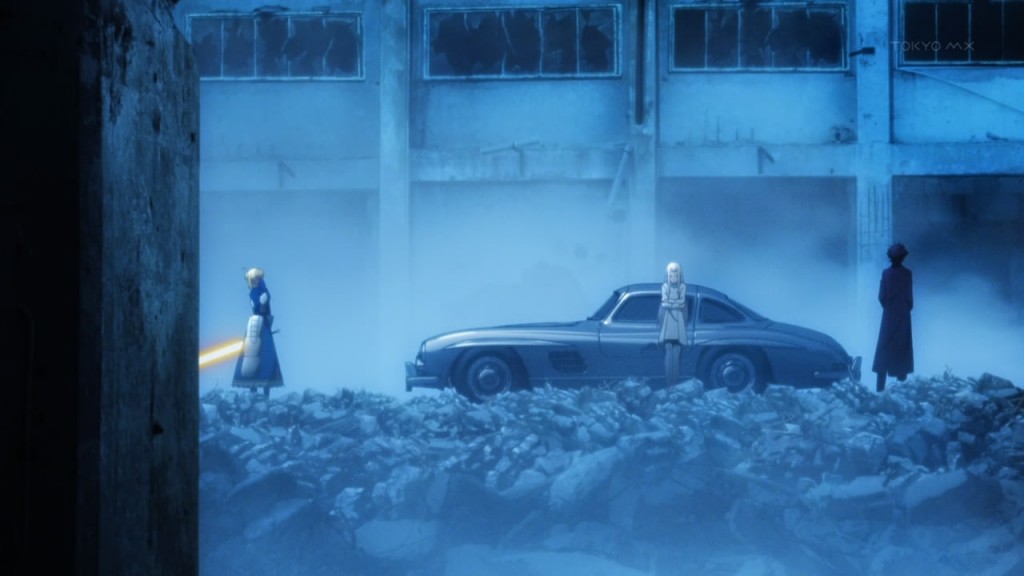 The most epic crossroads ever... Nuff said!

Its easily understandable why Saber wasn’t a huge fan of Kiritsurgu in Fate/Stay Night. When Shirou asks about his father, Saber kind of dances over the issue, and its readily apparent in Fate/Zero as to why. I think Irisviel puts it best.  Kiritsurgu has Saber endure constant humiliation. That’s what it is, and you can see Kiritsurgu truly detests Saber and all she stands for.

I’ve got to admit, I totally agree with Kiritsurgu’s view on war and battle. You can justify war with ideals and rules all you want, it doesn’t change the fact that people are killing each other. As Kiritsurgu describes it, its hell itself. I thought the clash of ideologies between Iskander, Gilgamesh and Saber was interesting, but that doesn’t hold a candle to this clash of ideologies.

Without even directly talking to her, Kiritsurgu tramples over everything Saber stands for, and insults her quite completely, and to top it off, he seems to have a very valid point of view. I felt bad for Irisviel, as she truly was stuck in the middle the whole spat, trying to bring Kiritsurgu and Saber to some sort of common ground and failing miserably.

Although gotta hand it to Saber, with her comment about Kiritsurgu wanting a true hero to save the world, she truly got a reaction out of the otherwise devoid of emotion man: 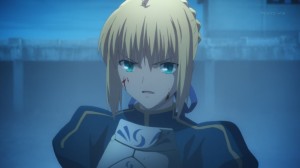 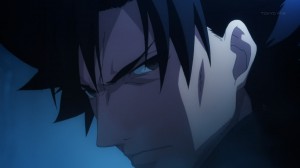 From the looks of it, Irisviel isn’t going to last very long. She faints at the very end of the episode, and its quite clear that she’s constantly too weak, and barely holding on. The real sad thing is that she puts an act infront of the man she loves, so while Kiritsurgu is fighting the biggest and most important battle of his life, he may be losing one of the few things that makes him happy. 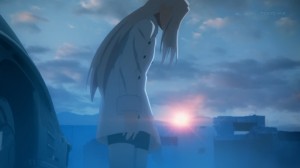 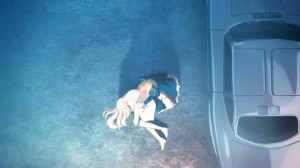 To close up, I’ll state that I absolutely love how wonderful the story for Fate/Zero is. The writing is off the charts, with impressive dialogue, exceedingly deep characters, and a truly amazing bunch of ideas as far as premise go. Kiritsurgu is the very personification of the anti-hero, almost chillingly so. Meanwhile, Saber is the very personification of the hero, and as such pairing the two together is an extreme stroke of genius. In terms of entertainment and story, its even more interesting that the eventual Shirou and Saber pair up in the sequel story.

Combine that awesome writing with ufotable’s jaw dropping animation and you have one intricately well done series. I cannot wait for the latest episode, which luckily,  we don’t have to wait too long for since it should come out sometime later today. The review should arrive much faster as well! 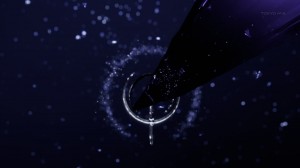 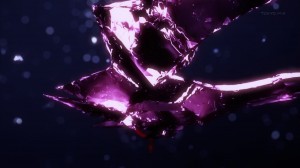 Next week we’ll see the creation of a new alliance? As well as more deaths, as the body count will continue to increase!