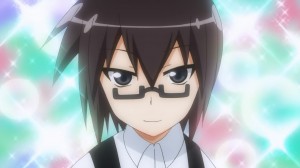 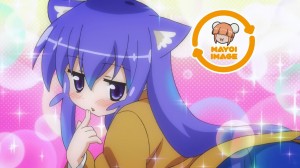 To give a better impression on the new series, decided to wait at least three episodes before starting to post these. After all, if there is anything that the previous seasons have shown us its that the first episode may not accurately reflect the kind of show people are going to be seeing. The first show that I’m starting off with is Acchi Kocchi, which may be the cutest series of the season. It’s not a word I throw around very often, but really calling it anything else might be a disservice.

Simply put the series is focused on two main characters. Miniwa, Tsumiki and Otonashi, Io. It’s a close friendship that really is just inches from becoming an actual romantic relationship, but some issues are separating them from that point. Tsumiki is a ridiculously cute character who is pretty obviously in love with Io. Her problem being that she can’t actually openly admit how she feels and thus things haven’t progressed on her end. She’s also a girl with some serious talents like cooking and having almost superhuman strength. Io on the other hand doesn’t seem to be aware of her feelings and hasn’t made a move himself. Thus they are left being really close, but not crossing the line. He’s also pretty talented and can cause Tsumiki to overheat with his actions. 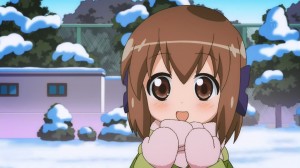 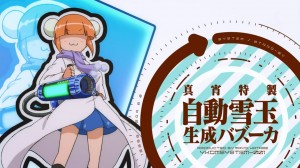 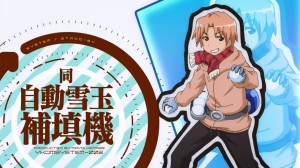 Of course it’s not a series of just two characters. Their three friends (Hime, Sakaki, and Mayoi) help make this a pretty hilarious series. Hime is pretty sweet girl who can get caught up in the romantic atmosphere that sometimes surrounds Io and Tsumiki. She’s also pretty easily tricked. Sakaki is the male friend in the group and he’s a pretty comical guy. A good friend to Io and can get really fired up about things. Mayoi is a definite trickster and seems to enjoy taunting Tsumiki about Io more than anyone. Of course that makes her the main target of Tsumiki’s superhuman attacks. Also have to say this series shows more blood (though in a comedic sense) than a lot of action series that have come out. I’m glad to have a series that doesn’t think these characters have nose-bleeds that are as black as ink.

It’s a pretty funny series I have to say. The group has good balance which keeps things funny since it’s not the same person setting up the gags every time. Things actually get pretty physical as well with some of the games they end up playing. The series is pretty slice of life, but doesn’t restrict itself to firm reality. Can have things like an insane air hockey game or hitting someone so hard that they get stuck in the wall. I think it’s a pretty funny series overall.

In the end though people will be watching for the main characters. Tsumiki in particular is so cute it’s somewhat scary. When the cat ears pop out and she’s blushing the girl is just that cute. I’d probably recommend checking out the series just to enjoy Tsumiki being Tsumiki. But really this is a show that does a nice job combining some comedy and a bit of romance. 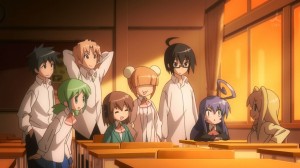 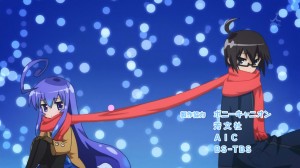 The OP definitely fits the series though. It’s a nice touch having the VAs in the series sing it. Hits home that this is a series about them and the lyrics really fit. It’s a pretty cheerful OP, the fast pace definitely reflects the mood of the series and how something is always happening. I also just liked that little part with Io and Tsumiki connected by that red scarf. It’s going to be a tough road, but I’ll cheer those two on.

ED [Te wo Gyu Shitene] by ARM, Masaru Yokoyama: (B) 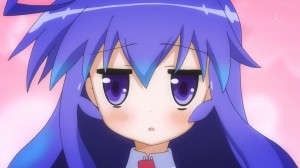 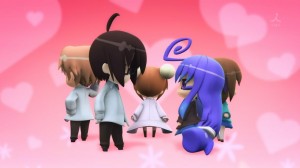 The ED isn’t bad either. Starting off with a figurine of Tsumiki spinning on the spot followed by Io. Certainly a simple style, having the figurines of the characters in the series popping up, but it wasn’t bad. Suppose not a bad way to start off trying to get some future figurine sales, remind people every episode XD. The lyrics really do feel like they come from Tsumiki’s perspective. Probably the purest way her feelings are reflected in words. Not the most amazing ED ever, but it does the job. 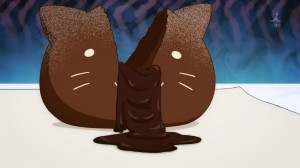 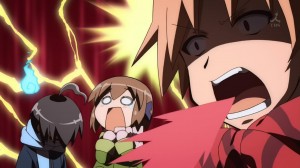 Long as this is the kind of series you are going to be interested in then I’d definitely recommend it. If you want some laughs, watch a cute main character, and just relax while watching some anime this is a good pick for the Spring Season.