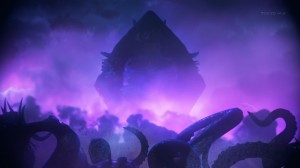 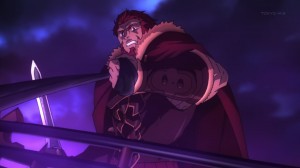 Fate/Zero makes its return this week, with what can only be described as an extremely flashy entrance. I’m not sure why Ufotable decided to take a three month break mid season, and kind of dub this season 2, but if the animation in this episode was even remotely affected by the break, then I’m totally fine with the break we got!

There were so many wow moments in this episode, as well as some major plot developments. Of course, this episode also had some great meetings and battles as well, amidst the ongoing chaos. Saber, Rider and Lancer barely made any head way into their big battle  with Caster. In fact, I have to agree with Gilgamesh when he simply stated that it was pathetic to watch three heroes not being able to take down Caster. 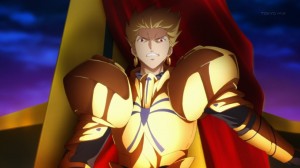 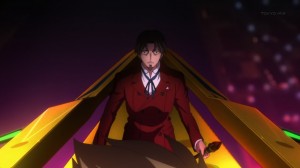 Speaking of Gilgamesh, the guy was as whimsical as always, and a totally loose  cannon. The exchange between Tokiomi and Gilgamesh was pretty humbling for Tokiomi. For all his confidence and way with words, Tokiomi is unable to really control or even manipulate his Archer. You could really see the frustration in Tokiomi’s face as he constantly tried to appeal to Giglamesh extremely bloated ego, to no avail. It was interesting to note that Giglamesh could easily whipe out Caster with Ea, the sword he uses on Shirou in Fate/Stay Night, yet his pride and ego prevents it, much to Tokiomi’s frustration.

Of course, its not like Gilgamesh just sat and watched the battle the entire time. Just as Gilgamesh decided he was going to leave, he was attacked by none other than Berserker!

And wow… Was this battle in the air extremely jaw droppingly awesome. Ufotable really knocked it out of the park with the animation this week, and the aerial battle between Archer and Berserker was prime proof of how awesome they are. I often find myself forgetting that this is actually a Anime TV series, because the production values can really go to Anime movie levels at times.

Now… While Gilgamesh and Berserker fought in the air, their masters had a stand off on the ground. 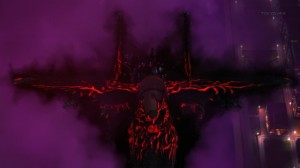 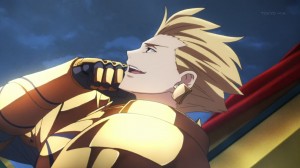 The meeting between Kariya and Tokiomi was definitely as intense and chilling as I’d expected it to be. What was kind of surprising and eye opening was Tokiomi’s reason for giving Sakura over to the Matou clan. His logic was kind of fatherly… in his own twisted way. In a way, Tokiomi wanted what was best for both his daughters, or at least what he thought was best for both of them. Its kind of eerily creepy how much Tokiomi values magic as the most important thing in existence, so much so that he’d send one of his daughters up for torture in a rival family JUST so she could also be a mage like her elder sister.

I definitely shared Kariya’s frustration in all of this. Not only had Tokiomi taken the woman he loved the most, but he had pretty much not given a damn about the family and love he received from the union. If there’s one person I can blame in all of this, its Tokiomi’s wife, who fell in love with the wrong guy and was totally okay with the problems that came with marrying a Mage. I’d like to ask her if it was all worth it, after she loses her husband in the war, and loses on of her daughters to the Matou. 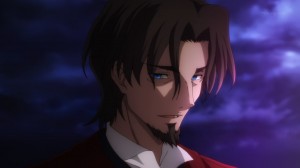 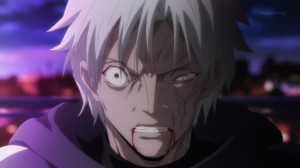 What is effed up though, is that neither Tokiomi nor his wife, know of how effed up the magic of the Matou family is. Would Tokiomi ever have hesitated to send his daughter off to the Matous if he knew the nature of their magic? Probably. But in the end I think the egotistical sicko would’ve still done it.

I personally am rooting for Kariya to at least do Tokiomi in, as we all know Tokiomi will  die, but I’d rather it not be from the betrayal of Gilgamesh or by Kiritsurgu’s hand. I’d rather we have Kariya at least take down the man that not only got everything he ever wanted, but spat in the very concept of it.

That said, we also got the first Master’s death in the war. We had Kiritsurgu snipe  and take out Ryuunosuke: 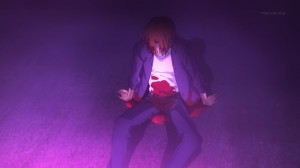 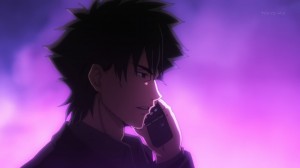 Gotta hand it to Kiritsurgu, he definitely seized the opportunity to take down one nuisance. Now the only way for Caster to stay alive is to reach the shore. Of course, Kiritsurgu also realizes the importance of taking down Caster, and is preparing a plan for it already.

I find it extremely ironic that Kiritsurgu has to rely on the bond that Lancer and Saber have established, something that has continuously frustrated him and caused problems for him. In this situation, they need Saber’s Excalibur Noble Phantasm, and in order for her to use it, she needs her arm back, which Lancer has cursed. 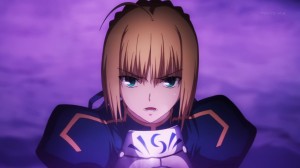 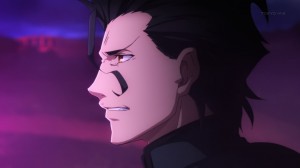 I”m interested to see where this battle goes. From the looks of it though, things are finally getting serious and underway. This is going to be an epic ride! 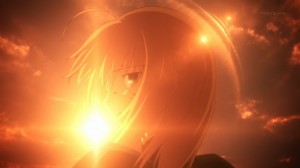 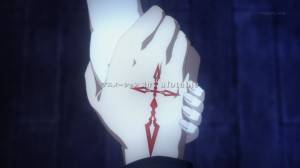 The new OP isn’t bad per say, but its definitely not as good as the first one. The animation in particular, leaves a lot to be desired when compared to the epicness of the first season’s OP. Added to that, the song is good, but again, it just can’t compare to the awesomeness that we heard from the first season. I will say that I like the tone of the new OP though, as it really signals that things are about to get extremely intense and are coming to an end. Overall, not bad, pretty darn good actually, but still in the shadow of the previous season. 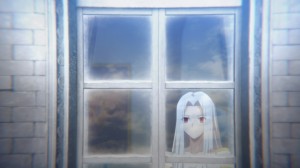 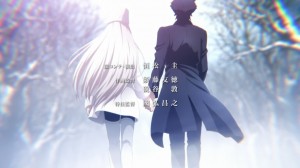 My thoughts on the ED kind of mirror my thoughts on the OP. Its a good ED, and I love the focus on Kiritsurgu and Irisviel, but I think compared to the epicness of seeing all the heroes in their past lives, it can’t compare. Same with the song really, its good, it gets the job done, but I miss last season’s epicness. Either way, not bad! 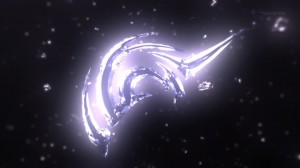 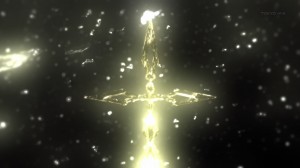 Seems like Lancer is actually going to undo the curse and let Saber charge in? Interesting! See you all next week!