The story follows a young teenager named Kaito, who unknowingly witnesses the crash landing of an Alien female, Ichika, who is in search of a specific place on our planet. If you’ve heard the premise before, its definitely because it seems a lot like Kuroda-sensei’s last great series, Onegai Teacher. The differences though, cannot be more astounding. 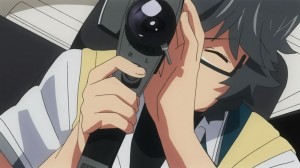 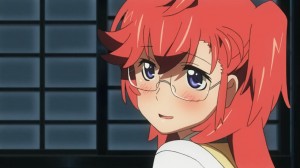 Kaito along with his friends, begins making a movie over his summer break and Ichika winds up being invited to play the heroine. During this summer, many memories are made, many love triangles are discovered and even some hearts are broken.

While these days it’s common to find romance comedy shows that needlessly pad out the main romantic issues and constantly tease their audiences with a resolution that rarely ever arrives, Ano Natsu de Matteru is the direct anti-thesis to this very concept. The plot for the story is expertly paced, with every burning question answered as quickly as it is brought up, only to introduce more and keep the story fresh and meaty.

And while the story may seem to be sci-fi based, the idea of science fiction is more of a plot device than anything. The real premise is that of teenagers finding love and dealing with the issues that arise. The story is simple, yet unpredictable and uses its sci-fi elements as foil to drive the rather classic and true time tale of longing and being together. 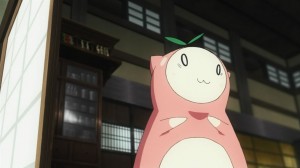 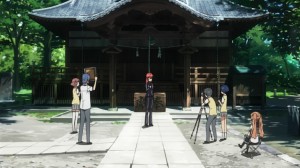 With a strong start, and impressive second act and a well done third act and clever ending. The ending in particular can be a treat for fans of Kuroda-sensei’s previous work Onegai Sensei (Please Teacher) as both series are set in the same universe and Ano Natsu offers a little nice tidbit to tie the two together.

When it comes down to it, this series is  not only exceedingly easy to not only like,  but hard not to love for all that it accomplishes with its story, pacing and impressive twists and turns that keep you guessing till the end.

Of course, what really sells Ano Natsu de Matteru as a wholesome and totally amazing experience is in it’s extremely human and very likeable cast of characters.

Kaito is a refreshingly forward and strong main protagonist, one that may seem weak from the outset but quickly dispels any wrong first impressions. Ichika is the extremely likable, very feminine, strong and polite girl next door type. 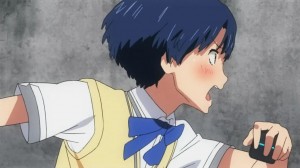 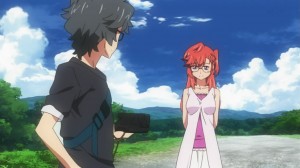 Then we have Tatsuro, the likeable best friend who’s caught in his own little love triangle with childhood friend Kana and her friend Miho. Kana is the head strong, independent and focused girl with just the right amount of sharpness to ground her in reality.  Then, we have Miho, the extremely shy and overly polite girl, that has a few hidden secrets of her own. And finally, Remon, the one character in the cast that audience will most identify with and be  intrigued by.

Again, what makes the series so much fun to watch is how these characters behave, staying true to their core character, but still maturing and growing in a very organic and natural way. Much like the story, nothing really feels off, or forced with the characters, and makes them some of the most memorable characters to be found in a romance series, right up there with Ano Hi Mita Hana no Namae Bokutachi wa Mada Shiranai and Toradora, 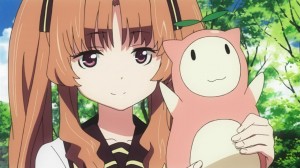 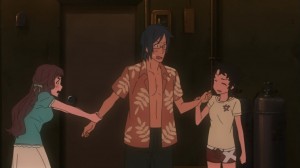 On the production values side of things, Ano Natsu de Matteru offers a strong and very crisp offering. The animation duties are done by J.C Staff, and mirror the art style present in both Toradora and Ano Hi Mita Hana no namae, and it not only works but serves the series quite well. While there isn’t much grand spectacle in the series, given the nature of  the genre, the few action or sci-fi sequences that are present, are very pleasing to look at, even if they aren’t jaw dropping (which is fine).

The music in the series is exemplary, with a great OP and ED set that is easily one of the more memorable sets of the year. The background music and ambient sound is great as well, doing its job so well that you hardly notice it, being swept totally into the moment.

Complimenting the excellent sound work as the equally impressive voice acting, Stellar performances by veretan seiyuu (voice actress) Haruka Tomatsu as Ichika and relative newcomer Nobunaga Shimazaki as Kaito breath new life into an already impressive series. Add amazing talent like Kaori Ishihara (as Kana), Yukari Tamura (as Remon), Kana Asumi (As Miho) and Hideki Ogihara (As Tetsurou) and you have a recipe for awesome. 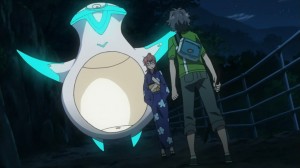 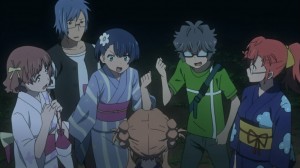 All in all, if you’ve ever even remotely been interested in the romance genre of Anime, or if you liked Onegai sensei (Please teacher) at all, then you’d be hard pressed to not pick up this series and experience it. And if you’re not a huge fan of what the romance genre seems to do these days, then DEFINITELY give this series a go. At 13 episodes, the series is a thrill ride through a wealth of emotions that will leave you gasping for air and yet pleasantly satisfied.  We award it a spectacular A+!