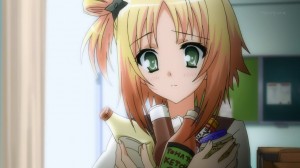 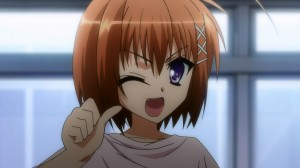 Well for my choice this spring season have decided to go with the familiar. Since I enjoyed the first season of Kore wa Zombie Desu ka, there didn’t seem to be a reason to not pick up the second season. The first episode really does continue with the same feel as the original season and how it got started. I can say that Ayumu is the funniest zombie main character who also happens to be a magical girl that I’ve ever seen. Of course hard to find a harem lead who fits into the same kind of category that Ayumu does. The first episode really had a familiar feel as it went about re-introducing characters from the first season and getting you back into it. The positive is that they only need this first episode to remind everyone about who everyone is and then they can get back into the story. I’m not sure where the story is going to go, but the OP did give a few hints as to what might happen.

Ayumu honestly pays one of the highest prices for a harem that I’ve ever seen. I mean this guy had to get murdered first which lead to Eu the Necromancer reviving him. Then he absorbs the magical powers from Haruna which turns him into a cross-dressing magical girl. After that he has to deal with the daily verbal abuse of a vampire ninja while an accidental kiss gets him ‘married’ by clan rules to a different vampire ninja. Of course the whole being dead thing and the cross-dressing magical powers has to be the real prices he paid to get to this point. 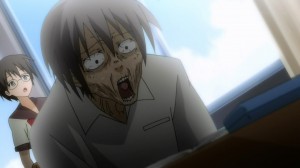 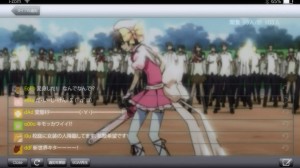 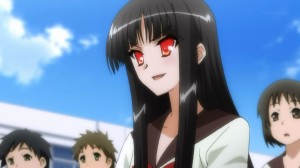 Both of those issues really came to bite Ayumu in this episode. Dealing with the sun that almost mummifies him is bad enough, but then came the fight with the Megalo. As usual the enemy was pretty creepy and it got even worse when Ayumu had to transform. I mean damn transforming into that in public had to be the worst thing he’s ever had to do in his life. It’s a step up from the first season where he only finished the fight and was in public. This time it was full cellphone coverage from transformation to the end when Mystletainn snapped. I have no idea what will happen. Have to think the memories will be erased since Ayumu would literally stop going to school if they didn’t.

It seemed like the harem almost doubled in an episode though. We had the mysterious drinking loli who pukes rainbows, the class rep (finally a human interested in him), and then Sarasvati who fell in love with him after staring at his naked butt….Yeah that all happened. Well of course I like the cast coming back from the first season so long as they continue to get the majority of the focus they can make things as crazy for Ayumu as they want. 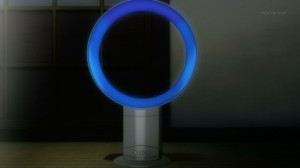 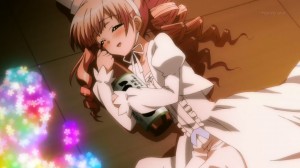 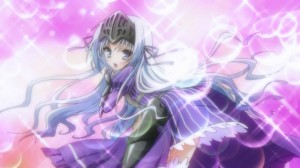 I really do wonder what is up with the drinking loli though. She appeared right at the end of season 1 and had a strange influence on this episode. Her identity is bound to be revealed soon, but I’m just at a loss regarding what kind of impact she’s going to have on things. Either way the drunken chat she had with Ayumu was worth some laughs. That girl really doesn’t mind abusing the school resources for her own use.

For whatever reason I do love the Dyson fan that the series seems to enjoy showing off. It’s the only place I can remember seeing those in anime and they are pretty cool to look at. Of course they are so expensive I can’t imagine ever actually owning one.

Have to welcome back Ayumu’s “Eu vision”. Every week they pretty much give a new VA playing the internal voice of Eu that Ayumu has in his imagination. That guy really does manage to have a fun imagination and I’m glad he lets us share in that. 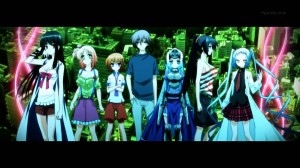 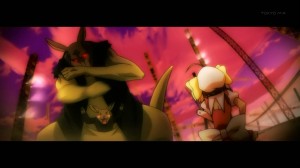 In terms of the OP we had another good song I thought. Nothing wrong with an upbeat song that gets you excited about the episode that’s about to start. Seems like we can expect some good action from the series and the return of Kyouko. If that crazy girl is going to get involved in things again that should make this second season nice and interesting. If all the characters shown in the OP actually make an appearance then I won’t have much to complain about since things will be pretty busy. 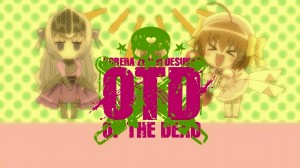 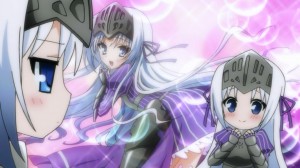 The ED had some similarities to the first season’s ED in terms of the Ayumu abuse. Of course the main focus was having each main girl line up for a kiss. Have to say characters like Yuki really made themselves look pretty cute during their turn. I don’t have too much to say about the music since it just didn’t hit me as being that memorable. Not to say it was bad, it didn’t overshadow the visuals and sounded fine to me. Not a bad way to end an episode really.

I wonder if Eu facing off against Ayumu’s imaginary images of her will happen often during this second season? If it is just a one time thing it was worth some laughs for sure. Now that we’ve gotten the introductions out of the way I’m looking forward to what will come next as the series truly gets started.
Score: B+