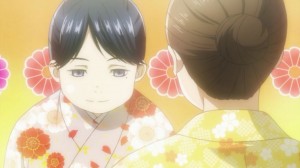 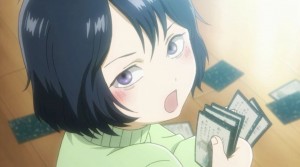 With the qualification tournament completed, we have a minor time jump to the final tournament of the year where the challengers finally get to compete with the reigning King and Queen.  As the episode starts, we see Chihaya at Taichi’s house and she’s super excited about getting to watch the match on his 60-inch tv.  Taichi asks her why they decided to get together at his house and she brings up the fact that his tv is huge but eventually admits that she was invited to go to Dr. Harada’s house but didn’t want to bring Kanade, Komano and Nishida there since they’re part of the rival karuta society.  Taichi seems to understand what Chihaya means, but still seems a bit annoyed.  Chihaya is taking her shoes off when she hears a voice from the hallway and instantly freezes.  Taichi’s mother is still home because the play she was supposed to see has been cancelled and Chihaya instantly says she has somewhere to be and tries to run out of the house.  Taichi’s mother tells her to stay and enjoy herself, but it’s clear that she dislikes Chihaya for bringing her son back into the world of karuta.  Taichi notices how wound up Chihaya is and eventually invites her up to his room where they have a smaller tv to watch the match on (by “smaller” he means a 42-inch tv).  Chihaya is nervous about going into Taichi’s room and being alone with him, but the other members of the club arrive soon enough to join them.  As the match starts, Kanade is more focused on the kimono being worn by Shinobu and says that it has to be worth a million Yen.  Of course, everyone else notices that Shinobu is a bit…well, chubby.  Chihaya sees a limited edition handkerchief that Shinobu has and realizes that it was a prize from some ice cream company and comes to the conclusion that Shinobu must have eaten nothing but ice cream for the last few months in order to win that contest.  As the match starts, Yumi is able to win the first match because Shinobu just isn’t moving as fast as she used to due to the extra weight she’s put on.  Chihaya almost feels sorry for her, but remembers that she’s watching the match in order to gain more knowledge on how to beat Shinobu the following year.

Finally, we get a peek at Shinobu’s past and how she came to be Queen.  As it turns out, her mother took Shinobu with her when she left her husband and sought out her mother for support.  Her mother reluctantly agreed, but said that Shinobu must be learning something of worth if they are to stay in her house.  And so, she tried calligraphy, painting, traditional tea ceremonies; everything they could think of.  Shinobu’s mother began to become depressed and worried that her mother would kick them out when Shinobu discovered a set of karuta cards.  At first, she thought they were pretty pictures and started studying them.  Her mother told her that it was stupid for her to be spending so much time on a card game and that she should be learning something worthwhile, but her grandmother – in her own, cold way – seemed to approve and sent Shinobu to the local karuta society.  Shinobu soon became obsessed with the game and was often teased because of this at school.  Because of this, the cards quickly became her only friends and she relied on them to get her through the day.  While watching the match, Chihaya notices how gentle Shinobu is with the cards and realizes that Shinobu is connected to each and every card the way Kanade is.  She comes to the conclusion that until she’s able to forge that kind of bond with the cards herself, she’ll never be able to win against Shinobu.  Shinobu eventually wins the match and retains her title as Queen, much to Nishida’s disappointment.  After the match, Chihaya asks Taichi if he has a deck of cards she could practice with, but Nishida scolds her.  He then tells her to watch the men’s match because although she wants to mirror Shinobu’s style, the current King’s style of playing is much closer to her own.  We then get a brief look at the men’s match and we find out that the current King has impressive hearing like Chihaya.  In fact, he claims that instead of having seven one-syllable cards like everyone else, he has 28 of them. 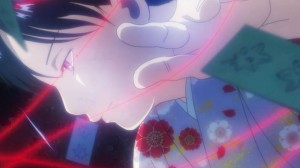 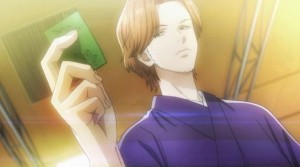 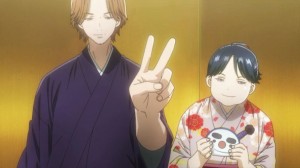 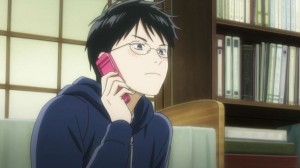 The finale starts off with everyone watching the end of the Masters match.  As expected, the match is fast and seems to be over in only a matter of minutes due to Suo being able to get every card before his opponent can even react to it being read.  At the conclusion of the match, both Nishida and Taichi seem a bit depressed about how good Suo is at the game.  They watch the interviews with the victors and several people ask Shinobu to join them at their karuta society and she tells him that she wants to become stronger before she joins a society, which basically means she has no intention of joining a society.  Yumi’s teacher is watching the interviews and reflects on how hearing Yumi ask him for his support was the best thing he’s ever heard and he feels a bit of pity for Shinobu and Suo for not knowing how it feels to have someone supporting you from the sidelines.  Meanwhile, back at Taichi’s house, his mother pops into the room and comments on how everyone looks so depressed before saying it’s getting late and everyone should go home.  The whole way home, Komano has his nose in one of his notebooks and doesn’t talk much until they get to the subway.  Just as Chihaya is about to leave, he calls out to her and tells her that she has 20 one-syllable cards in her arsenal.  This stuns Chihaya and she isn’t sure how to react to the news.  That same night, Taichi is wallowing in self pity about how he’ll never be able to compete with the current Master and he calls Arata to talk to him about the match.  Arata has actually set up the cards the way they were in the final match – he said he called a few people from his local karuta society who were there to fill in the gaps – and he was trying to figure out how the master plays his game.

This takes Taichi off guard, since he always thought that it was stupid to practice his swings or play practice matches against himself.  Arata begins to tell Taichi something, but his mentor from the society arrives suddenly and says that he’d like to play a match against Arata.  The next day at school, Chihaya is baffled by the amount of notes that Komano has taken during all of their matches and feels incredibly indebted to him.  Komano writes down a list of her one-syllable cards and gives it to her; Chihaya gives him some candy she had in her pocket before promising to give him something better to make up for it later.  Later, Kanade finds Chihaya in the hallway reciting the one syllable words Komano had given her (and incidentally drives away any suitors) but is startled by Kanade after a few minutes.  Kanade tells Chihaya that she’s decided that she wants to become a reader for karuta matches and read the cards at Chihaya’s Queen match.  Chihaya becomes excited and wishes Kanade luck because you apparently have to reach Class A to even be eligible to take the test to become a reader.  This devastates Kanade because she’s seen how hard Taichi has been working to reach Class A and she becomes rather dejected.  However, when they reach the club room and she sees Taichi performing practice swings (Arata told him that his grandfather always told him that being fast in a match usually helps compensate for not having as good of a game sense as others) she seems to become motivated again.  She practices her card reading to help prepare herself for the day when she has to take the tests to become a reader and though she stumbles, she keeps trying.  Meanwhile, their teacher is in a faculty meeting and she’s fighting tooth and nail to keep the karuta club in their currently club room.  Many of the other teachers want to move them into a classroom, but she continues to tell them that they need a soundproof environment in order to properly practice.  She eventually comes to an agreement; if the club can get another five members the following year, they’ll be allowed to keep their club room.  If not, they have to give it up to the jazz band club.  Later, Chihaya finds a note in the door and it’s a hand-written note from their teacher telling them about their agreement.  She also informs them that she managed to get their club funds upped to 30,000 Yen (this is the only thing Kanade seems to notice in the note).  When the next school year starts, Chihaya goes around putting up signs for recruitment and though she gets scolded by their adviser again, she’s happy that the teacher is helping her by suggesting where to put more posters. 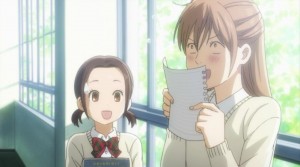 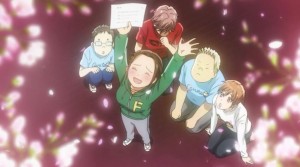 Opinions:  This was a really nice ending to a really nice show.  It tied up quite a few loose threads, but also left it open to a potential second season.  The fact that they have to recruit another five members or lose their club room is a cliffhanger in it’s own right, but I’d also like to see how the club progresses during the next year.  Does Taichi ever confess to Chihaya?  Does Chihaya ever become aware that Taichi has feelings for her?  And more importantly, does she ever get to compete with Shinobu for the title of Queen?  And what about Arata?  Is he going to get back into the swing of things and become the next challenger for the master title?  There’s still a lot of questions I have, but overall, this was a good finale that wrapped up a few things I still had questions on regarding the club.  I’m hoping to see a second season because I’d love to find out what happens next for the karuta club!