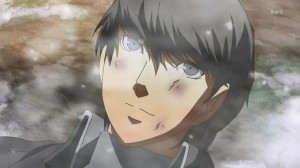 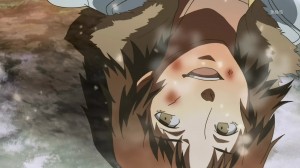 Persona 4 is getting closer to the end and the revelations are coming out at top speed. Not only does this episode tell everyone who the villain behind these cases is, but even Kuma gets his past revealed. It was pretty interesting having the pieces put together and finally confronting the one who caused everyone so much trouble. Seeing a dark side from someone you only saw as a comical character is pretty surprising.

I knew the series was low on time, but I’m still glad they managed to fit in the mini fight with Yu and Yosuke. They’ve been together in this mess the longest so it would suck if Yosuke was the one who lost his mini-moment with Yu because of time constraints. It is pretty understandable that Yosuke felt that way. He’s proud of his friend and how he’s been able to carry everything despite the danger they’ve bee in. But there is also that jealousy that he was different from Yosuke and everything seemed to move around him. Most importantly Yosuke just wouldn’t be able to look at him face to face if he still had all that locked up inside. Best to be honest, have a bit of a fight, and just be able to move ahead as friends. Good old fist communication saved the day here. It let both of them really just release their stress and with everything that has been going on there is plenty to be stressed about. 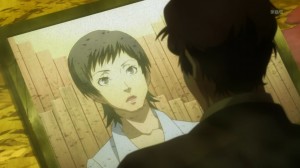 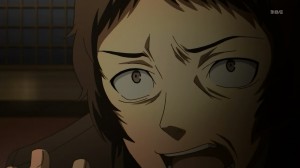 So we finally can call out Adachi as being the original killer. It has been so long since I played the original game that I can’t really tell how surprised I was about this. I think they did a good enough job making him a little suspicious, but it still might not have been enough. Adachi really was always around the group and leaking bits of information when necessary. I suppose he was eager to keep his game going and so wanted to have the group fired up. I just think back to a moment after Mitsuo was caught where Adachi talked about how it’d be tough to get him for all the deaths. Then back to when he talked about how Dojima might be going to Namatame’s room. He could have gone off by himself without saying anything, but instead lured the group there. After that he took all the guards with him leaving Namatame unguarded and put the idea out there that he wanted to kill Namatame. I’m sure the whole thing was just a great game for Adachi to see if the group would take the bait and kill Namatame. The idea that a group that fought so hard to save people would commit murder in the end would probably have been really entertaining for him.

It wasn’t a bad move to mix together chasing Adachi with the explanation for his actions. There wasn’t much to link him to the first two incidents without this episode. It was pretty creepy how he was clearly interested in Yamano and then snapped on her. It got even worse with Saki who he really abused his position in order to hit on. He can say what he wants about the first death, but obviously he knew that Saki would die when he tossed her in there. I really do wonder if he put the idea of saving people into Namatame’s head to get back at him. In his mind both girls were interested in Namatame and not him so he’d bring that guy down too. You can add a third attempt at murder with Mitsuo who he tried to get rid of so his game could continue. 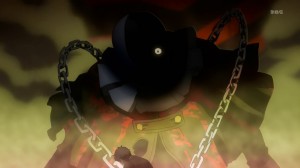 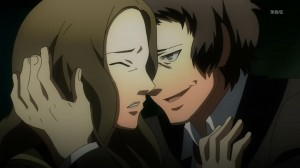 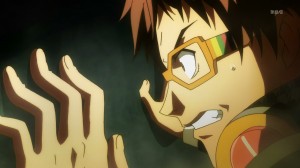 Just hard to believe all this was because Adachi was bored. He had good grades, was sent to a small town, and for that reason figured he could ruin lives for his entertainment? Saying he isn’t really responsible since the shadows kill the person not him. The same kind of argument for throwing someone into a pit of vipers and blaming it on the snakes. He is the worst type to be responsible for a crime like this. There is no sense of guilt with this guy that you can appeal to in order to turn himself in. Even if they drag him back how are they going to pin those deaths on him? The police are hardly going to want to prosecute one of their own without anything solid. Anyways, I’m hoping they can fit in some of the banter between Adachi and the rest of the group next episode. In the end Adachi is one twisted piece of work. Throwing Saki into the TV and then sticking his head in so he can taunt.

It is too bad the series had to rush itself like this. Even with no OP/ED they don’t have a lot of time to spare. Thus Adachi’s talk about people turning into shadows really comes out of nowhere. At least in the game you could get a sense for what he was saying, but here it seems weird. Certainly the fog has been prevalent in the last couple episodes, but feels like too little too late. There is something odd going on though. For whatever reason that fog world seems really attached to Adachi and giving him more power. It just adds another problem for the group to take on. They have to stop Adachi, but also stop the effect of the fog on the outside world. Nanako is stable for now, but have to believe if they can’t stop the fog then she won’t be for too much longer.

A big surprise thrown at the audience with Adachi summoning his own Persona. But even more surprising is that the persona is Magatsu Izanagi. There has to be a meaning behind Adachi using an Izanagi variant here. At least in this case Izanagi isn’t completely worthless so it is fine for Yu to send out Izanagi to face it. 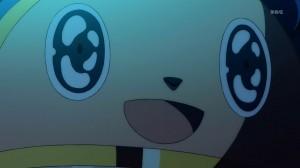 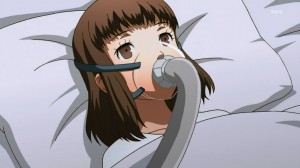 One can almost forget about Kuma’s revelation when dealing with everything else in this episode. Finally they reveal that Kuma was originally a shadow. In a sense he started out the same as the enemies they were fighting, but he changed. He gained an individual personality, wanted humans to like him, and had to erase his memories because being a ‘monster’ just wouldn’t line up well with what Kuma wanted to be. Agree with the group that it doesn’t matter what he started out as. Kuma gained a persona which shows that he really has arrived at pretty much the same level as humans. Kuma is Kuma and that doesn’t change just because of this information. Maybe in the end this wasn’t too shocking since we’ve known Kuma’s background had to be something strange. He wasn’t human and started out as a being that was always in that world. This revelation just answered some questions that needed answering.

I kind of liked how they fit in the Reaper into this last episode. Asking the small teams to take on that monster is a tall order. Simply put this was a monster you could randomly show up and took a strong team to topple. I’m not sure how quickly everyone is going to be able to come and help while dealing with that kind of enemy. If it was just one they might have been able to come and help Yu quickly, but against multiple Reapers its going to take a while. 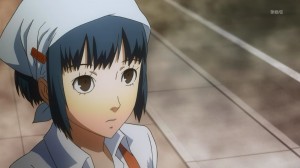 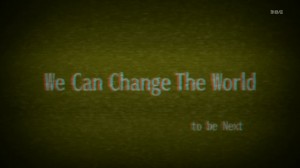 So here we are even closer to the end of the series. I had heard they were only going to have 25 episodes and if that’s the case no chance they can hit the true ending. They should be able to cover the normal ending though long as everything goes well. It does make me wonder if they intend to release the true ending as an OVA or Blu Ray only episode. Either way the next episode will be huge.
Score: A