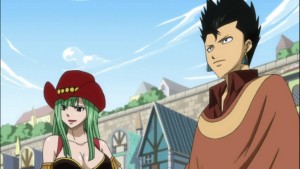 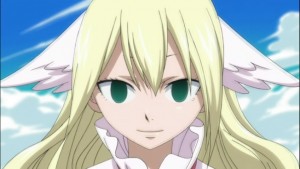 For what has seemed like forever, Fairy Tail has consistently  been hitting it out of the  park, with some seriously strong episodes. Every series has its ups and downs though. This week’s episode while having its fair share of revelations and twists, felt a bit weaker than anything else we’ve seen from this awesome series lately.

I think I haven’t rated Fairy Tail lower than an A for a while, so I guess this is the first episode in a while to get a B. Its not a bad episode, but I really felt like the series wasn’t firing on all cylinders this episode.

Its difficult to state whether I would’ve liked the episode more if I had not seen the preview last week, but I can guess that I would’ve felt a bit worse if I hadn’t. Given that I knew that Fairy Tail’s strongest had survived, I was a lot more patient with the first half of the episode, which largely felt very underwhelming.

It was interesting to see some of the characters age, especially Bisca and Alzack: 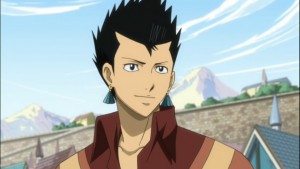 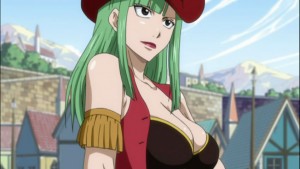 Al and Bisca both have the same last name now, which implies they got married in the last 7 years. I have to say, that time was kindest to these two, especially Al. Al went to a weird looking cowboy wanna be, to a Shoujo manga main male lead XD

Bisca… Well, she became even more of a fanservice character.

I think this episode provided a fairly interesting idea, namely “what would happen if Natsu and everyone else in Fairy Tail” vanished suddenly or died. As expected, while the other members left still tried to stay together, the Guild really fell to an all time low. From being in the center of town, it went downhill to being in the outskirts of town: 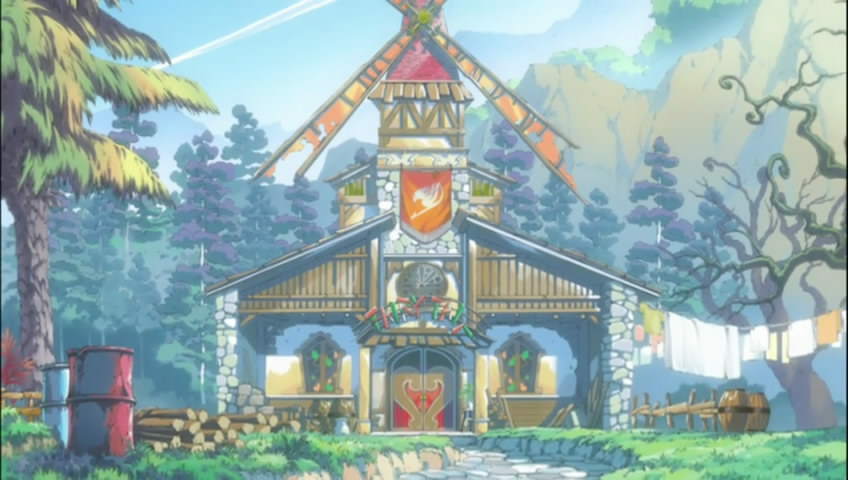 It's Fairy Tail ya' all!

It was interesting to see how some of the other remaining characters had aged in the seven year time skip. We got to see Makao take over the Guild, and doing the best he could. It was also cool to see Max still around: 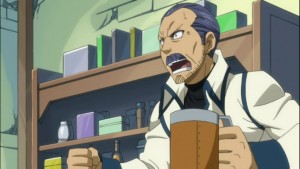 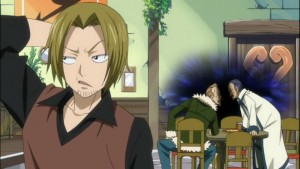 Some more hilarious transformations were obviously: 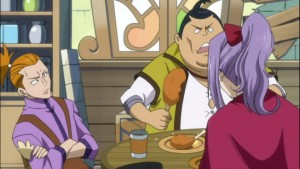 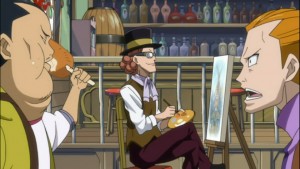 The two Levy fanboys changing extremely, and of course, A THIN Reedus! That definitely was interesting to see. Added to that, we had  Fairy Tail’s younger girls “mature” quite a bit: 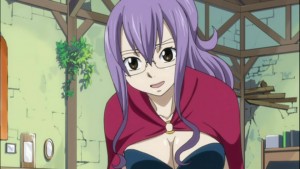 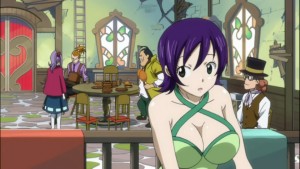 Of course, if you had seen the preview, or were smart and avoided it, Fairy Tail actually did survive, mostly because of their deep bonds and the ghost of their founding Master Mavis.

I’d like to say: “I called it!”, but honestly… It was pretty darn obvious that Loli-feather-ear-chan was Mavis. I do have to say, that I liked what I saw from Mavis. Even after death, she protected her future Guild members, and not only that, She smiled at Makarov: 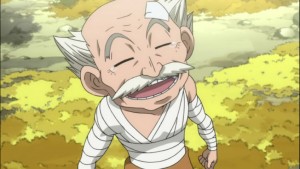 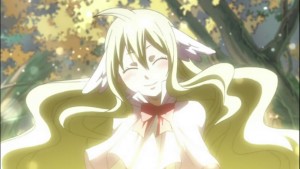 Having the founding Guild Master of Fairy Tail tell the current master that he’d done a great job was just awesome to see. Probably my favorite part of this episode. Overall, I really liked the introduction of Mavis, and I kinda wish she had a more permanent role in the series beyond just saving Fairy Tail’s strongest from Acnologia. Maybe we’ll see her in future arcs via flashback or something.

Also, I found it “interesting” that we essentially got a time skip in Fairy Tail, but the core cast haven’t aged a day. In a way, its like time travel. I do think a proper time skip could’ve happened at this point, but maybe its a bit too early in the series life span for a time skip. When both Naruto and One Piece did it, it really did feel like something monumental had happened.

Now, I’ve mentioned “interesting” as my way of commenting on a lot of this episode, and mostly because it was interesting, but it wasn’t jaw dropping or epic. Everything kind of felt “okay” and there really wasn’t any excitement.

I think a lot of it had to do with how quickly Natsu and co came back, and how useless the remaining Fairy Tail members were. I had some hope when we saw Romeo about to become a younger Natsu: 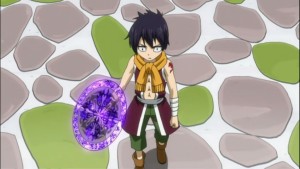 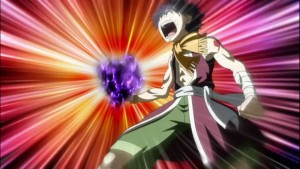 But we really never got anything from him. In fact, most of the remaining characters, instead of getting stronger over the past 7 years, had just been wallowing in pity, feeling sorry for themselves and missing their friends. It was slightly disappointing to see how far Fairy Tail had fallen, and its for that reason that I really wasn’t that impressed by the first half.

It would have been a lot more interesting to have seen Fairy Tail potentially just have split up due to personal differences, but still have strong Mages within it, rather than have all the weaker characters getting pushed around by a new lame Guild called “Twilight Ogre”.

And the return for the stronger Fairy Tail characters was too quick and kind of underwhelming as well. It would’ve been cooler to have seen the weaker “remaining” characters of Fairy Tail hold the fort for a few episodes, even run into a new villain, and THEN have an upgraded, older version of Natsu and the rest come in and save the day. 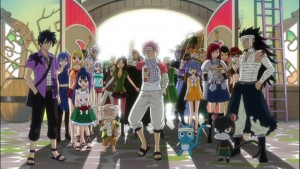 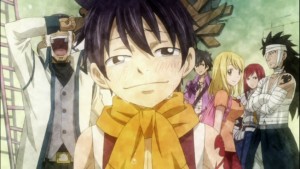 Instead, we just had Natsu kind of come in, kick the crap out of some weak forgettable nobodies, and then “ZOMG they’re alivel, happy times!” happen. It was a nice idea, but executed waay too quickly and abruptly.

With all that said and done though, this was a pretty good episode. Sure it won’t be impressing anyone, but the episode did explore some new ideas and stuff. We also got Ichiya and Blue Pegasus in the story, but err… I wasn’t too excited or interested in seeing them again.

And as some people have mentioned in the comments, Fairy Tail will begin its first round of long fillers starting episode 125. I guess it’ll be time to see if Fairy Tail can survive its first long fillers, and how much the quality will drop as a result.

Either way, this was a decent episode in and of its self, if a little underwhelming.

Note: Yes the screenshots are SD, this should hopefully soon be fixed with the real HD screenshots. I wanted to get the review up ASAP, so these SD screenshots will have to do. 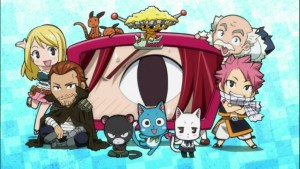 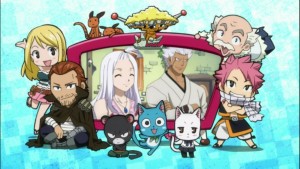 Next week is titled “The Seven Year Gap, and we can all assume that we’ll see more of what happened while Natsu and the rest were asleep. See you all next week!