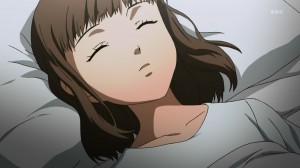 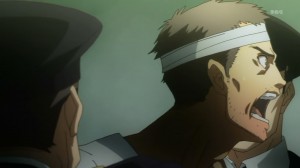 Have to think I’ll say this a few more times, but Persona 4 really is hitting its best moments now. There is no more character recruiting, just a mission to go and find the truth. There was nothing funny about how the group nearly threw Namatame into the tv or how Namatame thought he was saving people by throwing them into the TV. I can’t wait to see how the next few episodes are handled though I’m pretty nervous about it as well.

The start of the episode was a pretty tough to watch even knowing how things would turn out. Everyone just completely broken down knowing about Nanako. It was easy to see just how important she had become to that group. The idea that after all they had accomplished that they couldn’t save her had to be agonizing. No matter how long it lasted the ‘death’ of a young girl like that was a punch to the gut. I can’t blame Dojima one bit for heading right to Namatame’s room. The person that mattered most in his world was now gone because of Namatame. Yu is certainly part of his family, but at that point I wouldn’t have been surprised about anything. Namatame is simply lucky that Dojima was that hurt or he would have gone in there and shot him. 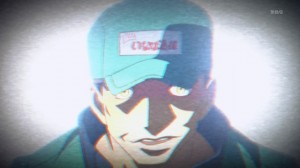 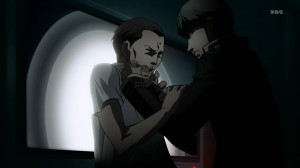 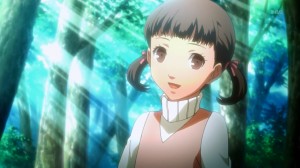 The scene in Namatame’s room was pretty stressful. Having the Midnight Channel play a role in that just fired up the characters even more. They were already angry and frustrated with Nanako dead and not being able to accept Namatame being allowed to live instead. The line was pretty clearly drawn and Yu definitely had that expression that lined up with how I felt in the game at this point. Kanji, Yosuke, and even Naoto on the aggressive side. While Chie, Rise, and Yukiko were more conservative. Not that they weren’t upset, but not everyone would shift rapidly to anger at that moment. It’s a frightening moment since once again the series hits the characters with a difficult moment. They basically have a free pass at murder here. If they toss him into the TV who will blame them? Namatame already set up the window escape and they can just say the room was empty when they got there. Dojima wouldn’t press them for answers and in the end it would be a criminal who escaped and was never caught.

Yu was damn dark when dragging Namatame to the TV. His eyes were just deadly and the anime isn’t hiding how much he wanted Namatame dead. Those flashbacks to Nanako’s smiling face just added to the intensity. What we don’t see here is that players had the choice to toss him in. The game could end right there. Can’t say that I stopped myself from taking that route either. Nanako has just ‘died’ and now you are given the chance to kill her murderer without consequence. I wonder how many managed to stop themselves? In the end Yu couldn’t do it. Throwing him in would have felt like dirtying Nanako’s memory somehow. Spilling blood because of her. Can’t say in Yosuke’s shoes I would have stopped. Yu really needed to say something better than something was bothering him and calm down Yosuke. It was seriously annoying finding the exact right dialogue choices in the game. A tough thing would be to ask what someone would do if Namatame was the true killer. With little solid evidence of anything but kidnapping Nanako what would happen if he walked? Can apply this to the real killer as well. What if the killer won’t turn themselves in? The only way to stop the real killer may be to kill them. It’s incredibly easy to shove someone into a large TV after all so preventing them from killing again would be hard.

In the end it was of course right for them to stop. They wouldn’t have reached the truth in this case. The fact that he kidnapped people and his actions even temporarily killed Nanako is the truth though. He can’t be forgiven for those actions even if he can be understood. The letters were the important point that could easily be forgotten. The words really don’t make sense from Namatame. He wouldn’t put Nanako into the TV to save her if he thought she’d die. 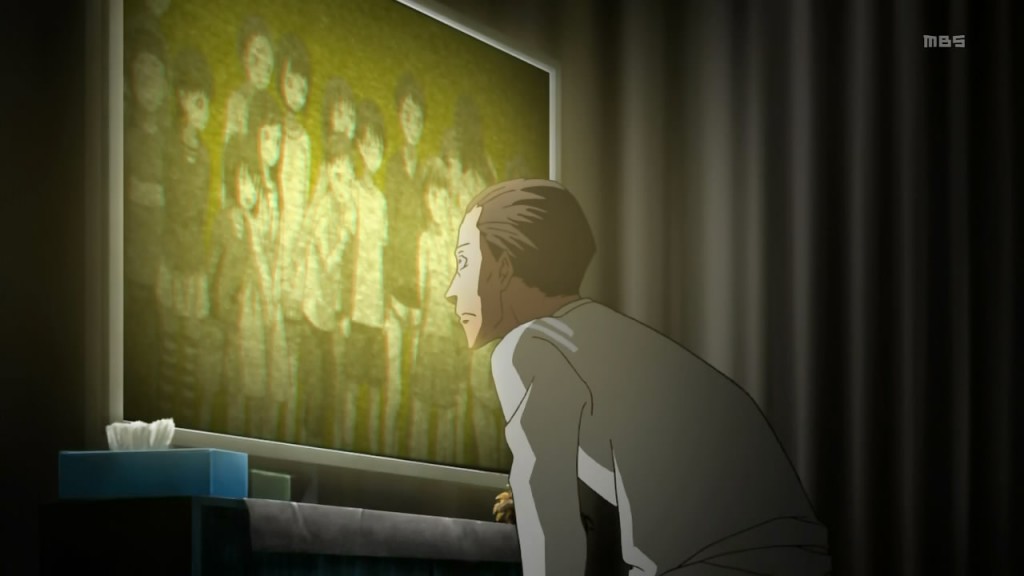 Unfortunately they had to skip the fun way they snuck into Namatame’s room. So we don’t have to think the police are keeping such light security on a murder suspect that kids can just waltz in.

Namatame’s story really helped to piece things together better. He treated the Midnight TV image of Yamano as being an SOS and tried to warn Saki when he saw her on it. Naturally no one would believe something that crazy (which is why Yu’s group was more subtle about it). While it wasn’t clear, we pretty much did get to see the shadows killing Yamano and Saki. How things worked out was utterly frustrating for sure. He thought that putting people in the TV would protect them from the killer. Namatame never realized that’s how Yamano and Saki were killed. Because Yukiko turned up alive and well that theory was proven correct in Namatame’s eyes. Every time he put one of the characters in and they turned up alive that theory would just continue to be supported. A terrible cycle being created where Namatame would put people into the TV to save them and our group would have to go in and rescue people. Even worse was that Namatame was becoming more mentally unstable as he went. With the police not believing him there really was only one choice in his mind.

The problem really came from the fact that Namatame never thought about going into the TV himself. He never looked into the place that he was throwing people into. Deluding himself and pretty much creating a messiah complex. Can only imagine the personal suffering that Namatame will go through now. He lost the woman he loved and fell into this mess. His desire to save people actually put them in danger. While we can’t know about the true killer’s motives, it appears all he did was endanger people. Of course his actions helped build a team that can now go and find the killer, but I doubt that will comfort him. 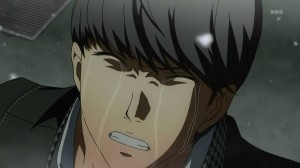 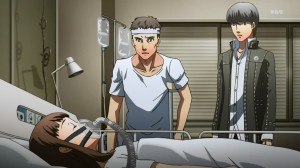 It was a nice thing having Yosuke be the one who turned back, when the group split up at the hospital. He lost someone already with Saki having died. Of course that explains why his anger was even higher than the others since he had 2 deaths on his mind. But because of that he knew Yu was going to need someone to be there. Dojima is in the hospital so there wouldn’t be anyone waiting for him in that house. The series just kept hitting home how much the loss of Nanako hurt Yu. In his mind she really was his little sister and she was gone. In the end Yosuke is Yu’s best friend in the group and he was able to lend a shoulder. Yu being the leader of that group requires him to look fine, but it’s alright to show that weakness with someone. Words weren’t needed, but Yosuke knew that Yu would simply need someone to be there.

The best part of this episode was that short moment when Nanako was shown alive. People can complain about how it might have been better story wise to keep her dead. That kind of loss would leave any ending bittersweet. But as someone who also got attached to Nanako I say “who cares!” Forget story integrity, I’d take even a miracle to keep Nanako alive. Sure, her condition is still weak, but it’s a whole lot better than being dead. In the end I think this is fine. People could be hurt over her ‘death’, we could get some intensity from the characters, and we get to keep Nanako alive. Looks good in my mind. 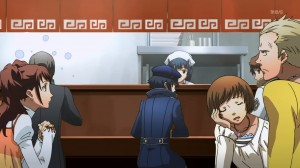 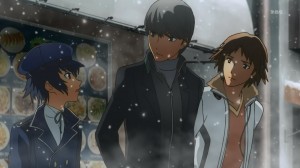 Of course for the sake of the story another important thing is the group closing in on the real killer. They removed Namatame and really anything they know about their kidnappings. The key thing is to focus on who fits the criteria that Naoto brought up. Someone that had a connection to the victims, could keep tabs on the group (they knew Yu was going into the TV and rescuing people), and could approach Yu’s house without anyone suspecting a thing. I’ll avoid speculation since I know who it is. Though would love to hear some guesses from the anime viewers who don’t have game knowledge. 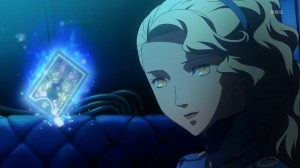 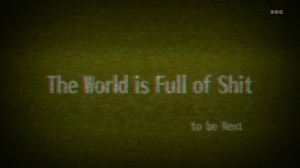 Now things are really heating up. Only a few episodes to go, but they have plenty to deal with. On top of it all Yu picked up the Judgment and Empress arcanas which should help him in the fight ahead. The series is moving to a close, but it’s only going to get more exciting.
Score: A+