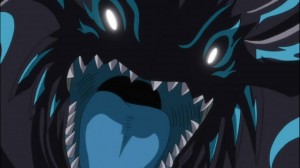 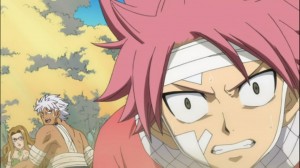 The big shocker really hits this time, as we see Fairy Tail give it their all and arrive at a very unexpected result. I think its safe to say that Fairy Tail is a shounen series that is truly breaking the mold, and like my “unpublished” review (due to myself getting sick) from last week, I can only stress that this series and One Piece are really starting to show the true potential of the genre.

This episode, we got a bunch of answers to some really burning questions, and on top of that, some serious surprises and some new questions that are going to really make things interesting. 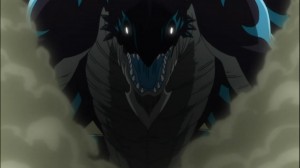 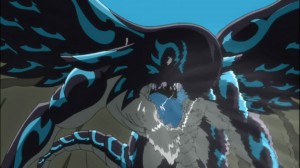 Looking at the big revelations we got this week, we finally found out what Acnologia was, and why everyone and their dog was so afraid of it. Like I had previously suspected, Acnologia turned out to be the Black Dragon that Gildarts lost an arm, a leg and a bunch of internal organs to.

What really caught me off guard was how even Zeref was afraid or at least, acknowledging the intense power of Acnologia. Not only that, it seems that this whole deal with Acnologia appearing and trashing everything has happened before. 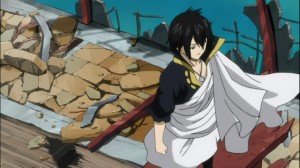 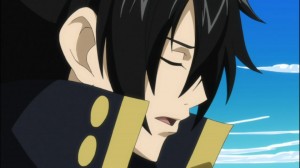 To add to it, we get some major new tidbits of information on Dragons. Firstly, all Dragons are highly intellegent creatures, but Acnologia is not only super strong, its also extremely arrogant, viewing humans as nothing more than insects that don’t even deserve to be talked to. If there’s one thing that’s true, its that no one, not Gildarts and not even Zeref truly understands Acnologia.

I’m still a bit confused about why it did what it did, and why Zeref simply getting mad triggers the appearance of the apocalypse. At the same time, the whole concept of the “end of an age” has strewn up some new theories on my whole “Natsu and Zeref are related” theory, but more on that next week. 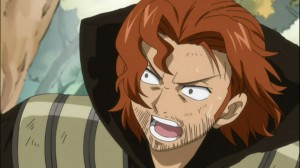 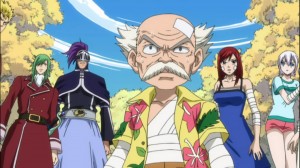 So Acnologia descends upon Fairy Tail, and its so friggin strong that both Gildarts and Makarov urge  the Guild to run like hell. When someone as strong as Gildarts or Makarov tells you to run, and is acting shit scared, then well… you really do take notice.

Makarov, being the badass parent and father that he is to everyone, prepares to sacrifice himself so his family and children can escape. Of course, knowing Natsu, Erza and Laxus, and just Fairy Tail in general, its impossible for them to abandon someone to just save their own hides. Given how strong and close they all are, its more possible to see them all die together than give up one of their own.

And in probably the most awesome attack combo ever seen, the strongest members of Fairy Tail combine all their major attacks into one major ball of awesome: 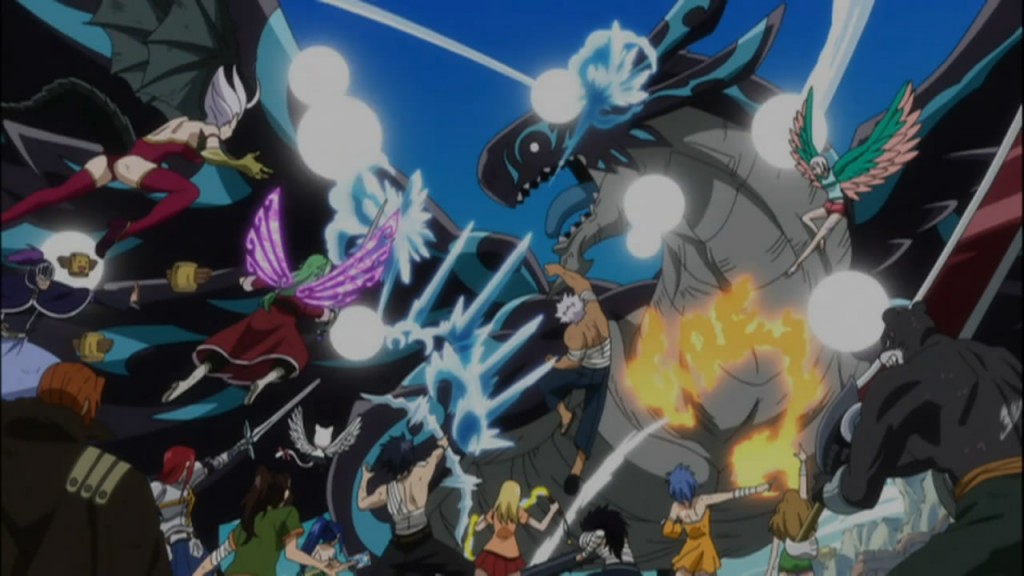 The Combo Attack of AWESOME!

And on top of that, the Three Dragon Slayers throw all their power towards attacking the Black Dragon and send it flying into the ocean. The day is saved…. right?

Now this is where the twist really comes in, one that probably has surprised anyone who’s seen a shounen series, or even just Fairy Tail. Instead of being able to beat Acnologia, Fairy Tail barely even dents it, and as Gildarts points out, the Dragon hasn’t used a fraction of its power, and is just playing around with them.

Sure enough, Acnologia rises out of the water and prepares to Annihilate the entire Island. Of course, in the spirit of what kind of show Fairy Tail is, the members of Fairy Tail, refuse to give up and join their own hands for a final combined defensive move.

This was a really touching moment, as everyone puts aside their differences,  and all is forgiven as they all unite under a common banner. We also get some nice Lucy x Natsu scenes. where Natsu sees Lucy in despair, crying, and that makes him rush to act: 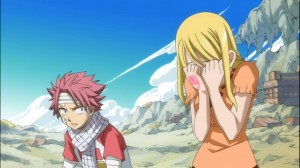 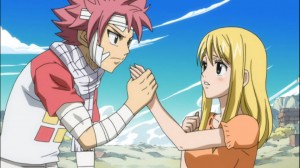 And of course, the most touching moment was when everyone from Fairy Tail joins hands: 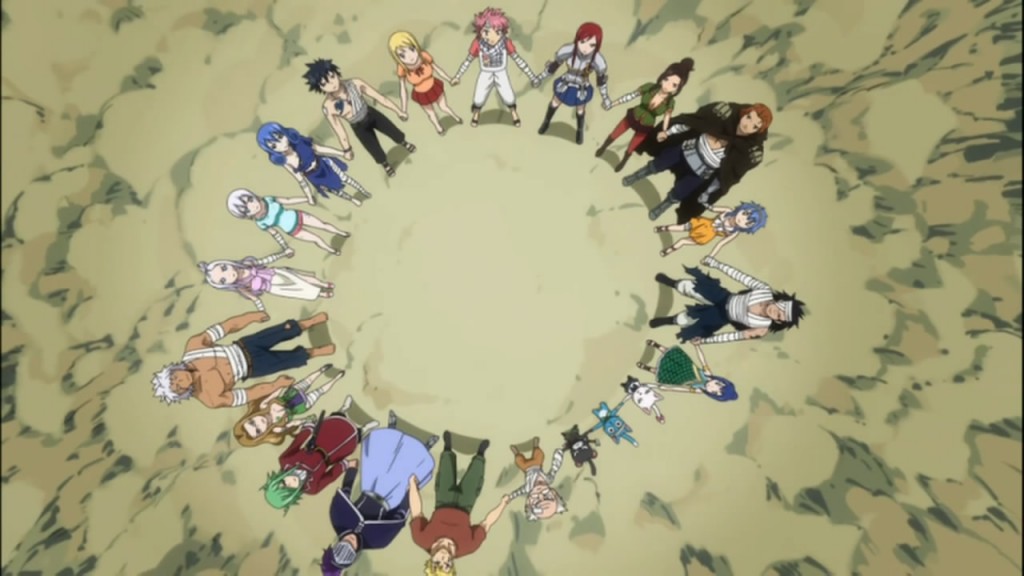 All of this makes a small elf like girl smile and begin to pray. 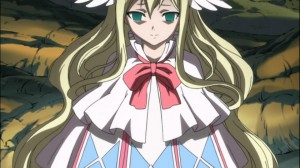 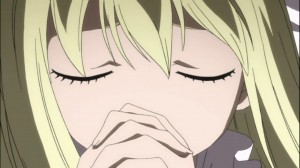 Of course, even that doesn’t do anything, and while we see a small girl in the distance, one who we at this point are all sure is Mavis, the founder of Fairy Tail, the Island still disappears to nothing, much to the shock of everyone else who’s around the Island. Even Zeref’s whispers his goodbyes before leaving. 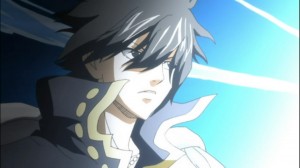 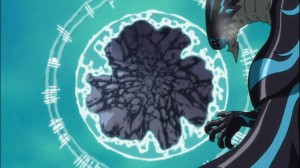 And we flash forward to a good 7 years in the future. Now, given that we know that Fairy Tail, or at the very least, Natsu and the rest do survive, its fair to say that we won’t be seeing anyone dieing. That said, its still unsure how Natsu and the rest do survive, how many of them do, and why they disappear for seven years. All of which, I”m sure we’ll learn in the following episodes. 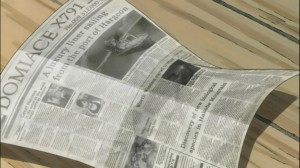 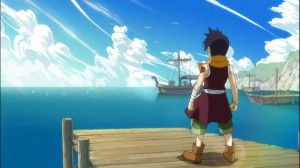 Now, while we got our answers about what Acnologia is, what Zeref meant when he talked about the end of an age (to some degree) and quite a few other things, there are still some serious questions left unaswered. Firstly, we still have no idea what Zeref’s relationship to Acnologia is, how Mavis suddenly appeared on the Island. Is she alive? Did the bonds of Fairy Tail awaken her? Is she forever bound to the Island as a Ghost?

For those that watched this episode, I really implore you not to watch the preview, as it really spoils a big punchline. For me personally, I kind of already guessed that something to that effect was going to happen. Either way, the mystery of the series, Mavis and Zeref, the One magic world and the disappearance of the dragons continues to get extremely interesting and endearing.

And at the end of the day, we have a shounen series where the characters, the heroes all band together, and stil fail against an extremely powerful foe. That’s pretty sweet, and really something that you don’t see all that much in the genre. 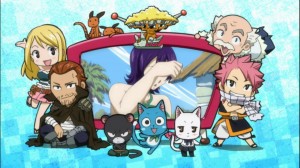 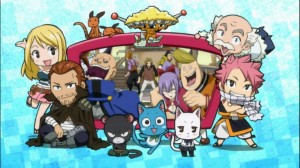 While there was a preview this week, I implore you to not watch or discuss it until next episode. I’ve left the major spoiler parts out of the screencaps. See you all next week!