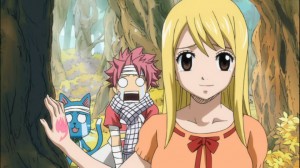 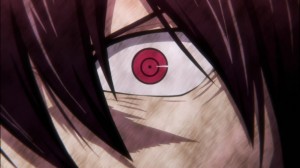 The calm before the storm is probably the best cliche phrase to describe this week’s offering of Fairy Tail. After the conclusion of the big battle between Grimoire Heart and Fairy Tail, we have the last bit of little side plotlines taken care of, and then we get the big twist that’s had manga readers excited for a while. 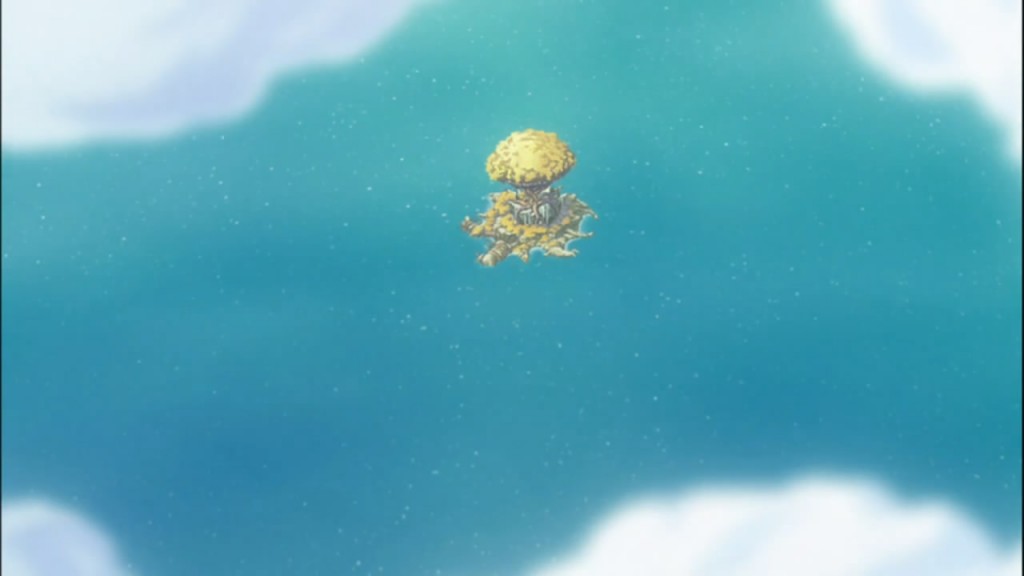 At the end of the very episode we hear Lucy utter the phrase: “Tenroujima, its destruction came so suddenly”. The big twist is in essence, that there is hardly ever a rest for the weary. As Fairy Tail overcomes its biggest challenge and crisis yet and what’s to follow but the biggest tragedy to probably befall the guild.

At this point, we don’t know who’s going to survive the big event that will probably leave resounding shock waves into the rest of the series, but its clear that something huge and big is going to happen.

We also get our first hint of what this Acnologia is, and it turns out to be the Black Dragon, which I suspect is the same one that Gildarts lost an arm and a leg to, as well as several internal organs. Its something that also seems to have a huge relation with Zeref. The theory runs wild, but its interesting to note that Acnologia turned out to be a separate being, and not some other version of Zeref that he had sealed inside himself. 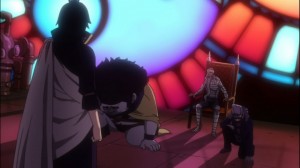 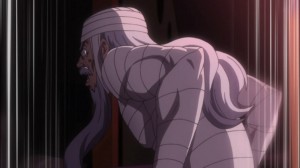 The biggest surprise this episode though, was learning that Zeref had actually been himself since the very beginning. Turned out Zeref was just a killing machine with powerful magic, and that he had become human due to some event that had taught him the value of life. I’m willing to bet good money that that “event” was probably an encounter with Mavis, the founder of Fairy Tail.

Of course, this only makes me wonder why Zeref is actually Natsu will be the one to take him down. Given, he’s got some very scary power and needs to have himself killed before he went on another rampage, but it makes me go back to my theory that Zeref and Natsu are related, and that Natsu might be possibly the son of Mavis and Zeref? Or at least maybe a descendant (namely because of how old Zeref is)?

Whether or not that is the case, its plain as day that Acnologia coming over is signalling the end. Gildarts has already tried to take down the thing, and I’m assuming it was lying dormant then, probably because Zeref was living out his days in isolation. Now, with Grimoire Heart’s latest endeavors, everything changes and Zeref is angry.

What is interesting is the look of despair on Purehito/Hades’s face when he realizes  that the keys that he’s been gathering have been nothing by a farce. By extension, this whole “one magic” stuff might be a farce, or at the very least, its not the grand thing that he believed it to be.

I admit, it was darn chilling and scary to see Zeref, as he admitted that he had simply been holding back, not wanting to kill anyone. With his powers allowed to run wild, he makes quick work of Hades, killing the guy within seconds.

The episode ended as Acnologia headed toward Zeref, and by some extension, Tenroujima.

While the big development and shock was definitely around Zeref, Tenroujima’s desctruction and Purehito’s  end, we got some other nice wrap up elements as well! 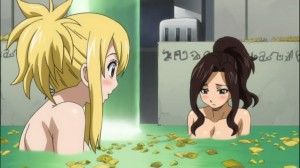 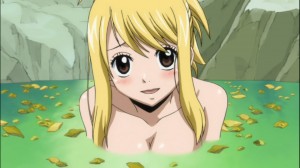 We got the long overdue resolution to all of Cana’s plot points. Honestly, I do think that Fairy Tail has some of its characters get redeemed waaaay too easily, but I think its worth looking at how much a peice of fiction  inspires people to forgive and forget.

I think I liked how Lucy stated that “it’d be hard on me if you kept feeling guilty”, and that really was the one touch I needed to see Cana forgiven. In my eyes, Lucy neither denied nor held a grudge on Cana’s betrayal, which was interesting because she DID try to deny Cana’s sin at first, but quickly realized that wasn’t going to work.

Added to that, we had Cana finally reveal her identity to her father, and honestly, it was a pretty touching moment. More so for Gildarts than Cana. It was really awesome seeing how “right” Gildarts behaved after learning that he had a daughter from the one woman he had always loved. 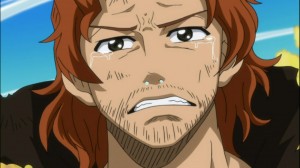 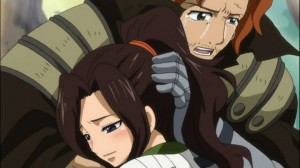 I can also understand how Gildarts would lose a woman, who is somewhat like Cana, head strong and independent and even somewhat needy, when he went out on jobs all the time. The added comedy of Gildarts mentioning all his flings was pretty funny, but it made the reveal that Gildarts only loved and married one woman all the more powerful. 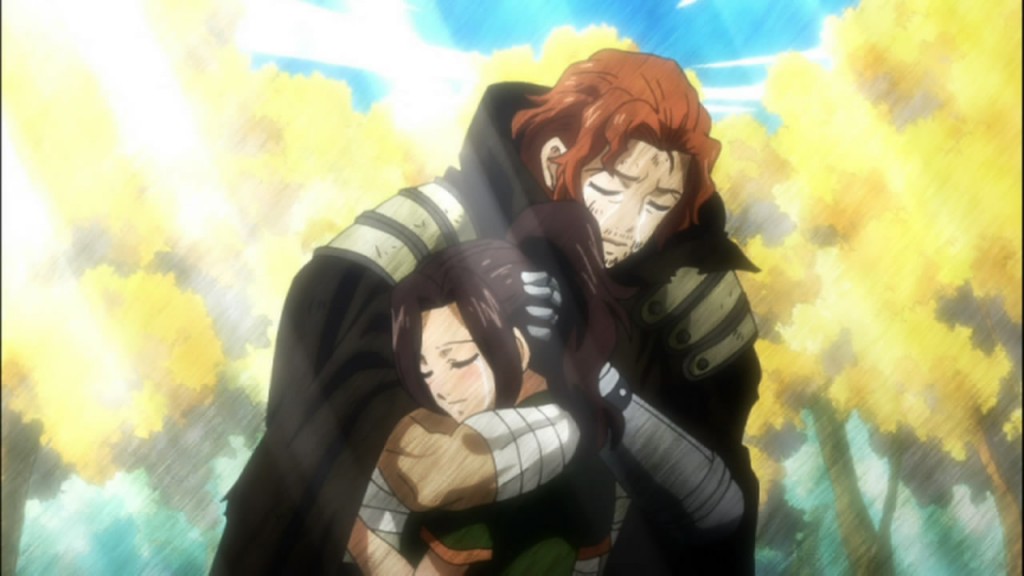 Overall, the whole Cana and Gildarts  family thing was done quite well, and actually almost brought a tear to me eyes, despite what Cana has done in this very arc. That’s powerful characters and storytelling right there. 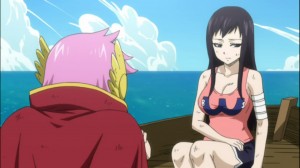 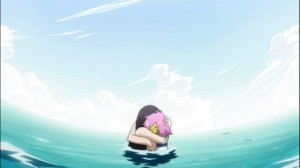 While I don’t think that Ultear is EVER going to be excused from all the sick things she’s done, I do think that her idea of being able to “re-write” everything later is somewhat plausible. It makes sense in a way, since she believed she could change  the future so strongly that she pretty much stopped treating her actions and her reality as “real”. Her time ark powers could very well be the catalyst for her  sick twisted acts, combined with the whole issue of abandonment from Ul.

In essence, while I’m not inclined to forgive Ultear’s actions, I can see that well… she had her reasons for doing what she did, and it wasn’t just because she was bit shit crazy. I’m sure if Erza ever found out about what Ultear did to Jellal, there’d be some major sparks flying.

But that all aside, Ultear and Meldy leave the Island before the big tragedy happens, and I’m sure we’ll see more of them in this series, later down the line. 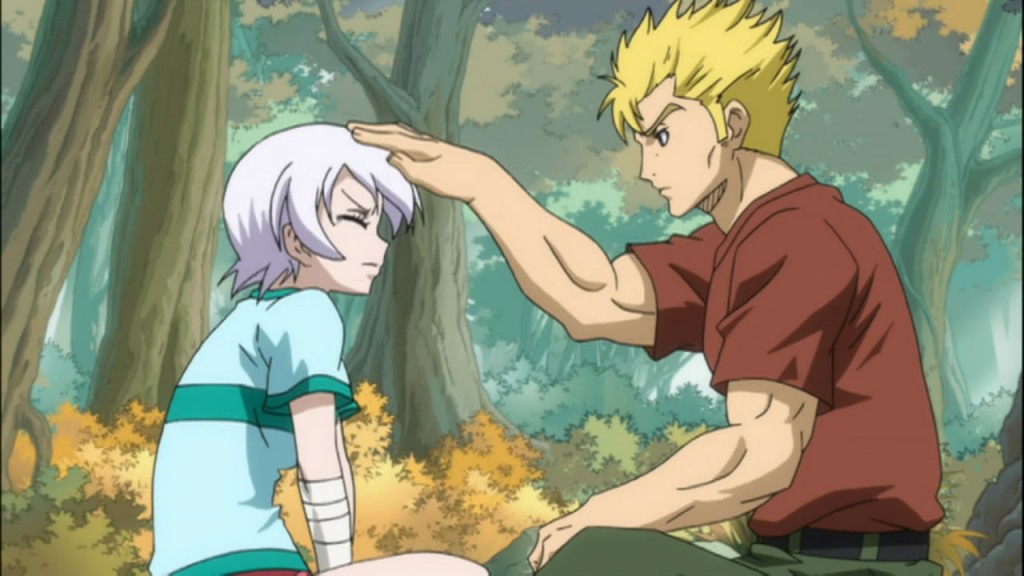 Its a real Lisanna! O_o

We also had some good moments of Laxus finally seeing Lisanna, and that whole interaction being kind of cute. I’m kind of sad that we never got to see the introduction of Wendy to Laxus, since that would be really interesting. Wendy is by far, the weakest member of Fairy Tail, and it’ll just be interesting to see how Laxus would’ve seen her, given how much he’s changed for the better.

That all said though, the big event is definitely going to be in the next episode, where we’ll see Fairy Tail, Zeref, and Acnologia take center stage, and probably have some major status quo changing events happen. I personally can’t wait!

Due to an illness (caught the flu… >_>), I was unable to put this review up on time, even though I reviewed it shortly after the episode. Therefore, this week we won’t have a preview or bonus images. Onto the next episode!