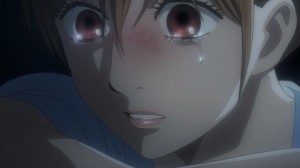 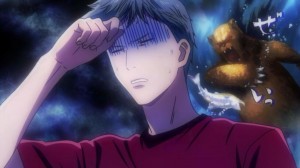 After Chihaya’s devastating loss in the qualification tournament, it’s not surprise that she’s an emotional wreck in this week’s episode.  The episode picks up right where we left off last week; Yumi has just won the match and Chihaya is stunned at the turn of events.  Dr. Harada notices that Chihaya doesn’t thank Yumi for the match (it’s pretty much an unspoken rule to thank your opponent for the match even if you lose) but doesn’t say anything.  Chihaya exits the room only to be surrounded by her friends, but she bursts into tears and runs off, locking herself in a storage closet.  Everyone tries persuading Chihaya to come out because they understand how frustrating it is to lose, but then Sudo appears.  He makes the remark that he’ll enjoy seeing what Chihaya looks like with a shaved head and tells Taichi that he’ll send him his e-mail address because he wants to see the ‘after’ photos.  Everyone panics – it appears that they had all forgotten about the bet – and they all offer to shave their heads in Chihaya’s stead.  Kanade even offers to cut her hair extremely short, but Nishida pleads with her to stay out of it.  Dr. Harada appears and asks what all the commotion is about and Taichi explains the situation.  Dr. Harada sighs, saying that Chihaya was an idiot to agree to that bet (something her friends all agree on) but makes another bet with Sudo; if he’s able to defeat Sudo in the tournament, Chihaya if off the hook.  Sudo mentions that they aren’t each other’s opponents in the next round and Dr. Harada tells him not to lose in the next round.

With the next round starting, Dr. Harada and Sudo head into the room to get ready for their matches but everyone else lingers behind.  Taichi tells them to go cheer on Dr. Harada while he stays behind with Chihaya to make sure she’s okay.  They all head into the room, casting worried glances at the supply closet that Chihaya is hiding in, but agree to leave her be.  Taichi settles in to wait for Chihaya to come out and checks his phone.  He tells Chihaya that Arata made it through the third round, which makes Chihaya angrily pound on the door.  Taichi tells her that he’s “mail buddies” with Arata now and that he was planning on giving her Arata’s number once the tournament was over.  Hearing about Arata seems to upset Chihaya since she’s wondering why she can’t be fluid in her motions like Arata or Yumi.  This seems to upset her even more, but she doesn’t say anything else.  Outside of the storage closet, Taichi is thinking about how hopeless he is; he should be watching the matches to prepare himself for when he makes it to Class A, but he’s hopelessly in love with Chihaya and doesn’t want to leave her.  Some time passes and everyone comes rushing into the room to announce the fact that Dr. Harada and Sudo are going to be playing each other in the next match.  Chihaya suddenly opens the door and tells Taichi that he should go support Dr. Harada and watch the matches to learn his future opponents’ weaknesses.  Taichi is surprised by her scolding, but everyone goes out to support Dr. Harada during his match.  As expected, Dr. Harada wins and everyone cheers for him, though he had completely forgotten about his deal with Sudo regarding Chihaya’s hair.  Sudo is actually rather surprised that he lost to Harada, though he likens the older man to a loud grizzly bear. 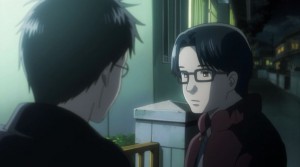 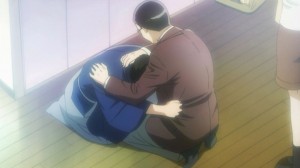 Unfortunately, Dr. Harada loses in the fourth round, but on of their club members (I honestly can’t remember his name) manages to make it to the finals.  At the end of the day, he and Yumi are the champions and are set to challenge the champions from the Western Qualifier to see who will challenge the King and Queen of karuta.  Things quickly go back to normal after that…well, almost.  Someone asks Chihaya out at the train station, saying that he thinks she’s cute but since he goes to another school, he doesn’t really know anything about her.  Chihaya is flustered about this and goes to Kanade for advice, but everyone thinks it’s a bad idea for her to go out with him.  When she asks why, Taichi tells her that she can’t date someone who has never seen her play karuta and the fact that she spends all of her free time practicing on her game, it just wouldn’t work out.  This seems to make sense to Chihaya, but she laments the fact that she already exchanged numbers with the guy and she’s getting a ton of messages from him.  Taichi takes her phone and blocks the number before telling her to get up earlier and take the train to school with him so she can avoid it happening again.  Kanade suddenly realizes that Taichi is hopelessly in love with Chihaya (of course, she’s reminded of a couple of karuta poems) and silently cheers him on while everyone else in the club is completely oblivious to Taichi’s romantic interest in Chihaya.  Meanwhile, in Fukui, Arata is having trouble finding anyone in his karuta society that is willing to play him at karuta.  A lot of the younger kids are scared of him, though one boy promises to get better at his game so he can really challenge Arata and make him proud.  Arata decides to go see his old friend (the one who made it to challenge the king) and plead with him to come back to playing karuta.  His friend tells him that Arata isn’t one to talk since he ran away from karuta for a year and a half, but Arata says that he regrets it and that he doesn’t want him to regret it either.  His friend tells him that his competition days are behind him, but he’s always open to a friendly game if Arata is up to it.

A month later, Chihaya and everyone head to the building where the finals for the tournament to see how will compete against the King and Queen is being held.  They have a best of 3 matches against the same opponent and whoever wins will go on to the final competition for the title.  Chihaya is extremely nervous for her fellow society member, but Kanade is excited because it’s her first match where everyone is required to wear hakama.  In the end, Chihaya’s fellow society member wasn’t able to defeat his opponent and though he tries playing it off, as soon as he sees Dr. Harada, he tears up and apologizes to Dr. Harada for not winning.  I don’t think Dr. Harada was upset, but it is the society’s goal as a whole to produce a Queen or King, just like any other society.  Around Christmas, Chihaya’s friend informs her that she has no choice but to go to the class Christmas party because all she does is spend her time playing karuta.  Reluctantly, she agrees, as does Komano.  As it turns out, everyone was forced to go their class’ Christmas party, but they all end up having a lot of fun.  Well, everyone except for Taichi because he ended up being the only boy there.  At their Christmas party, Chihaya and Komano are chatting and Chihaya wishes that the rest of the club could be there because then it’d be even more fun.  Komano tells her that if you wish that someone were with you, you’re more like family than just friends.  This seems to strike a chord within Chihaya and as her class leaves the place they went to for dinner for other festivities, she takes a moment to call Arata.  Though she doesn’t say anything, Arata knows it’s her and eventually Chihaya says that she’s happy to hear his voice before hanging up again. 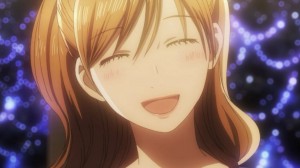 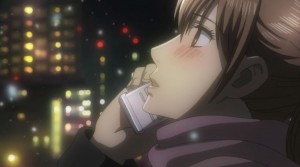 Opinions:  It’s rather disappointing that we didn’t get to have one of Chihaya’s society members go on to the final match for the title, but it is what it is.  We got a pretty decent episode out of it, so that’s all that matters.  Not only did Taichi finally admit that he’s hopelessly in love with Chihaya, but Kanade noticed it as well.  It makes me wonder if she’s going to try and help Taichi confess to Chihaya or not.  The only thing that could get in the way of that is Arata.  I’m not sure who I’d prefer for her to get with in the end, if anyone at all.  If anything, a boyfriend may distract her from becoming Queen.  Now that the title match is going to be happening soon, it’ll be interesting to see if Yumi can get her title back.  Plus, I want to know if Taichi ever confesses to Chihaya and what happens as a result of that!