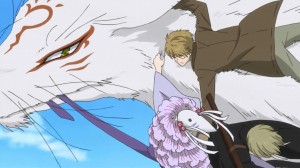 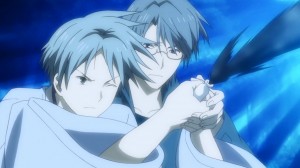 These two part episodes really have done nice things for Natsume. We get extra time to learn about particular characters who may never show up in the series again. Natsume also finds a way to get into even deeper messes with the extra time as well XD. This episode was no exception with Natsume bed-ridden for several days by the end.

This episode really felt like a breakthrough when it comes to Natsume and Natori’s friendship. Suppose it ties into how an earlier episode was the same when it came to Tanuma. This episode really helped Natsume adjust his views regarding Natori. Before they had issues due to the different way Natori and Natsume looked at things. Natori’s an exorcist after all so he looked at things from a purely human perspective and if he had to kill a youkai to get the job done, then that’s what he did. Of course Natsume tries to help everyone and cares about both his youkai and human friends. But Natsume had it right by the end here. They can balance each other out because they are different. Natsume can be pretty reckless at times which can be balanced out by Natori’s careful approach to situations. But Natsume’s kindness can make Natori take action and care more. 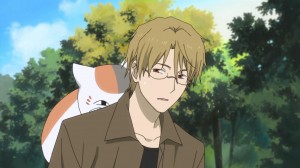 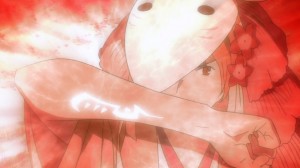 I’ve always liked the dynamic between Natsume and Natori. You have a remarkably talented guy in Natsume, but he doesn’t really know how to use them. Natori has all this experience, but his ceiling is probably lower than Natsume. Natsume is just starting to find his way in the world, while Natori has found balance between his exorcist work and being an actor. It has just always been fun seeing these two interact, especially with Natsume not liking how friendly Natori can be in public. The guy really is a great actor, able to slip between normal interactions and the youkai world. Natori can act like a mentor figure for Natsume, but Natsume really has helped make Natori a better person. It’s kind of funny in the end being a better person helped Natori improve his reputation.

Had to laugh that so many of my thoughts regarding this episode were wrong. Natori and Madara didn’t have to get along for long since they quickly reunited with Natsume and Hiiragi. Also a surprise was that Natsume who took most of the impact was injured less than Hiiragi who was out of commission. It just goes to show things don’t always go anything like you expect them to. 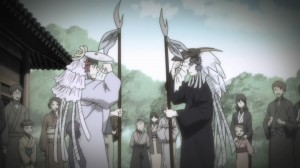 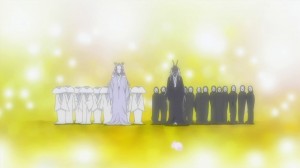 It shouldn’t have been much of a surprise for Fudzuki to realize that Houdzuki was a fake. If you are competing against someone for that much time, have to figure you get to know them pretty darn well. It’s more surprising that no one else really noticed the impersonation. Not really surprised either with how Fudzuki handled the situation. Houdzuki was replaced with this impersonator so can only believe that Natsume was involved somehow with the disappearance. Sure, he got a bit dangerous there, but considering its someone he’s known for a very long time its understandable.

In the end it was another case of youkai being forgotten. Houdzuki used a lot of his strength to support the mountain all that time. Not like Fudzuki wanted to win badly or he’d just keep the festival going. Have to wonder if he just intentionally threw the whole thing since it seems crazy to make the mountain and all life on it suffer. A nice invitation from Fuzuki to have Houdzuki join him as they leave the mountain. No one died here, but both simply moved on with their followers. 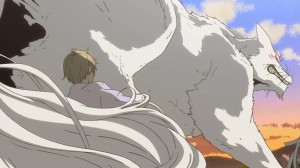 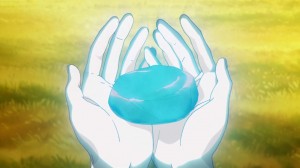 The fact that Houdzuki was so low on strength helps a lot of things make sense. The idea that some exorcist dumb enough to seal away a god without realizing the situation did sound a bit fishy when thinking back on it. Sealing a god shouldn’t be such an easy activity which is why someone like Natori was brought in. A situation brought on by a lot of people lacking information. The exorcist had no idea what he was getting involved in and probably was just testing his ability by sealing something away. The followers thought their god was bored or had escaped the seal and gone off by himself. Houdzuki probably should have just come forward before the previous festival and end the entire thing. But at least in the end nothing bad happened.

Madara stepping forward to protect Natsume just proves how much he cares. He wouldn’t just risk getting cursed by a god for just anyone. Even Madara isn’t all powerful and there are just some he’s not going to mess with if he can help it. 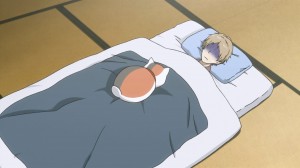 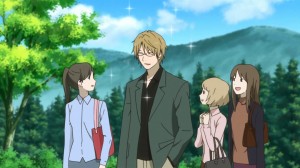 It looks like we’re in store for another look at Natsume’s past next week. Probably not another two part episode, since I expect that to be saved for the last two episodes. On that note we better see some Taki during those last episodes….But anyways, another good episode from Natsume. Natori episodes are usually interesting and this was no exception.
Score: A