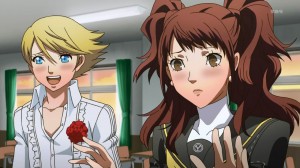 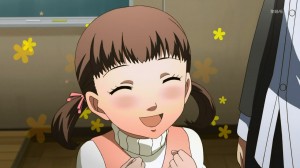 Well this was the expected trip to Yukiko’s place. Plenty of scenes with the girls in the hot springs and the guys…never getting in. Still we got some Yukiko development and one of the last fun episodes before the end. A good chance to enjoy things and feel a bit bad for all the injuries the guys sustained XD.

Nice try there Yukiko. Thought she could sneak Yu and Nanako over to her hours. But instead everyone jumped on the invitation and took advantage. I have to say though that delivery girl is quite the mysterious force. She just turns up everywhere you look. I’m starting to think magic is involved here and she may be the most powerful person out there XD. Though maybe the most surprising thing is how quickly Yu gets into the mood. Pretty much immediately after arriving at the inn he was in character. 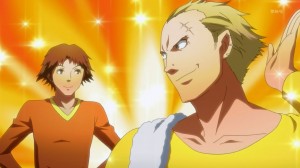 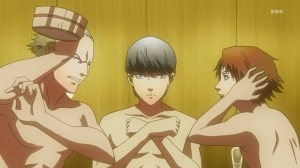 I’m glad we still had time for this episode though. I love how the guys get stuck in the ‘haunted’ room. No surprise that they couldn’t sell that room even during the busy season. Considering that’s the room Yamano (the person who died way back in episode 1) stayed, it’s no surprise no one wants to pay to stay there. It might mean anything, but it would creep people out for sure.

Though at the same time this event is one thing that had me shaking my head at times. I mean the guys get screwed over multiple times. The first time they did absolutely nothing wrong. It was their turn and they got called to say it was fine. Not like some usual cliché where the guy walks into that situation because they didn’t read the right signs or something. Now the second time was completely a cliche waiting to happen. But at least the first time they were in the clear. It was literally Yukiko’s fault on that one. A sad day for the guys there. I can’t really blame Yosuke for looking a bit dark….before the ping pong game XD. 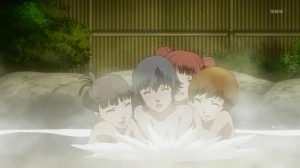 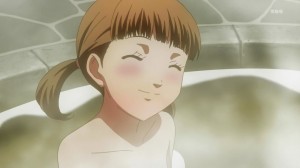 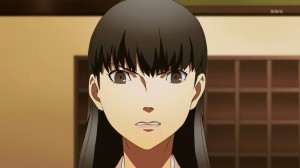 Of course on a lighter note can at least enjoy what might be the last bit of fanservice. Everyone just having fun swarming on Naoto. In that kind of situation if you look weak they will attack, I suppose XD. And really Nanako is an adorable character. Able to cheerfully talk about how responsible she is when alone. It definitely makes you feel sympathy for her. Still she had some really nice moments like hitting Yu and Kuma with a finishing blow. They really couldn’t do anything but go into their own insane ping pong tournament XD.

This time we get a bit more focus on Yukiko as the series continues to rate through the heroines while moving towards the end. Sucks for Yukiko to have to deal with stupid guys like that TV crew. Trying to make a stupid program out of their inn when it’s already got enough problems. There’s no chance that Yukiko would humiliate herself to bring in a few more customers especially of the type that program would lure in. No surprise she just snapped on those idiots. Insulting her family’s inn and trying to make a mockery of what they’ve accomplished to this point. It’s too bad that most of her arcana was cut out, but can’t be helped. Maybe lines up better with what she went through with her shadow. 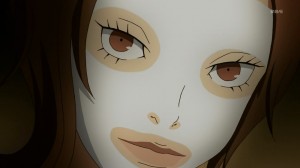 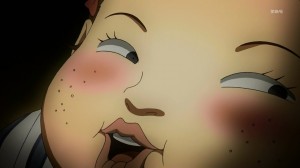 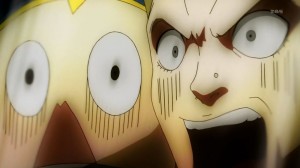 But yeah, perhaps the darkest moment came at the end here. They just had to sneak into…’that’ room. Seriously Yu and Kuma picking up a hairbrush and toothbrush…odd fellows. That may be the most traumatic thing (aside from life and death situations) that’s happened in the series.

Honestly, the important moment came after the ED. A letter being sent to Yu with a very critical message. Ironically it was the title for the next episode. “Don’t save anyone anymore.” Someone knows that Yu and his friends have been going and saving those potential victims. Just makes you nervous about what might happen. 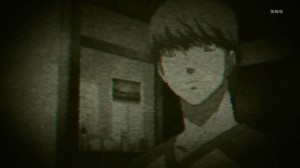 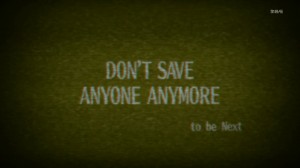 Despite this being a terrible episode for Yosuke and the guys, it wasn’t a bad episode overall. They wrap up Yukiko’s feelings towards the inn and can move forward. Sure, can still fit in some moments with the rest of the group, but for now they can move into the serious portion of the story. They don’t have any time to spare either. At most 6 episodes left and each one should be completely packed from here to the end.
Score: B+