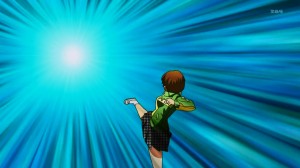 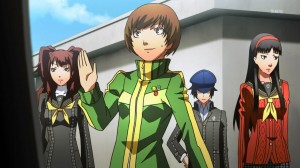 This is one time I decided to just snap and blog the RAW episode. Since I played the game can at least mostly get what is going on anyways. Besides a good chance to see how much anime has taught me about understanding language XD. Overall the episode was pretty much what I expected and that meant a lot of laughs.

I welcome Chie’s “Galactic Punt” to the anime. Since the characters themselves don’t fight in this we don’t get to see some of those fun little moves they can pull off. Though another thing that had me laughing was seeing Yu so fired up about the Beauty Pageant. Well I suppose it’s not unbelievable with the things he’s said in the series, but figures it’d be something like this that really got him excited. I mean any time our lead stands there talking for 30 minutes straight, that’s a pretty amazing thing. The guys were definitely all for the girls entering. Yosuke…well it’s Yosuke and the idea of having those girls compete is something I can agree with. Of course Kanji was pretty entertaining since he simply wanted Naoto to enter. Considering all that he’s gone through, seeing Naoto is something that confirms she’s a girl would just help him personally. Gotta love him pretty much saying “make me a man” by entering a beauty contest. 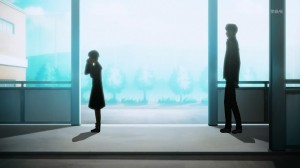 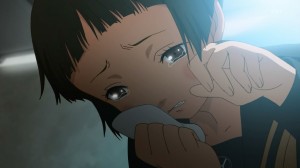 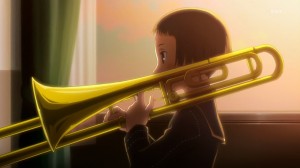 I wasn’t sure which arcana they were going to go with for Sun. Like with the sports club, there were two options for arts clubs. Didn’t think that Ayane would be introduced to the series via a soccer ball to the head XD. Guess this proves basketball was the better choice since he doesn’t have much accuracy with his kicks. Did like getting to see some of this girl though since having played the baritone I pretty much sat right beside the guys playing the trombone.

Really did feel bad for her when the regular trombone guy came back just in time. Yeah, she isn’t great, but she still put in a ton of effort into practice. To just give it to someone who hasn’t been able to even practice until the day of the performance….True enough the guy is probably better like that than Ayane when she’s practiced, but it still doesn’t feel right. What a cold group just saying he should play instead. I’d throw something at the girl that suggested it. Saying something like that then hiding behind a line like “everyone else feels that way right” as if roping them in. But sadly since none of them said anything can’t say they were great either. Could just feel her frustration as she yanked Yu out of there when he was going to stand up for her. Logically she knows that having the best person play is for the best and there will be more chances. But being told you can’t when you want to play is just agonizing. Happy someone stood up for her, but having to make them step away since its the ‘right’ thing to do. Of course I can hardly get why only one person can play anyways. Have them both play it. Or maybe they should have picked something that had a first trombone and second trombone part in case something like this happened.

Good on Yu to take Ayane around the festival. Of course had a good laugh when Ai kidnapped him and he didn’t want to go. I think those traumatic memories of dating her will stay with him forever. 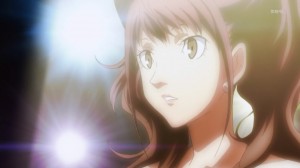 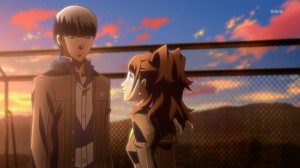 This episode did support my concern that they really are going to try something like every girl gets some alone time with Yu outside of their initial arcana moments. Of course I’d fully support Yu and Rise if they put them together, but not like I have high expectations. Could see the mixed emotions Rise is dealing with. Not happy about the possible attention she’d get from those posters and yet also unhappy with guys running off to see the idol who has replaced her. Of course she did finally get fired up when out there. Not so easy to just walk away in the end. The lights, fans cheering, it’s not like everything that went down as an idol was bad. It doesn’t replace having good friends now, but not like having people cheer for you is a bad thing either. Or so I’d guess XD…In the end I’m pretty sure Yu was saying that Risette is Rise so of course she’d be frustrated. She might be working on this case, but it’s not like that other part of her is gone. If she forgot about that it’d make everything she realized inside the TV pointless. Really kind of brought her arcana to its conclusion by saying she’d go back in the end. Right now has to work on this mystery, but nothing stopping her from making a comeback after. Think her efforts of getting through to Yu will take a long time though XD. 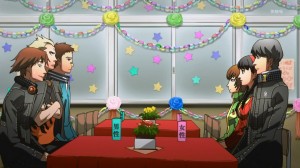 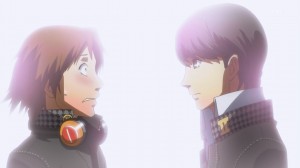 It’s really quite sad seeing that group date project in animation. What a dumb idea to force through. Though, when you think about it the class would obviously support something like that. You only need a few people to watch the room and run the dating. Most of the class can just skip out and have fun. Though I did feel sorry for Yukiko having to try and call out people to visit the room. Still it did lead to some good fun. I love how Yu actually prepared the sticks for another King’s Game. He really loved doing that in the earlier episode. Of course who could blame him since he pretty much got to make a harem in that game XD.

Yu really is good for comedy in this anime. Immediately signed up for the role of a girl in the mock group date. Of course he was also fired up for the cross dressing….yeah. Did enjoy the mock group date though. Funny with Yosuke getting cut off about the type of girl he likes, Kanji then pretty much describing Naoto, and then Daisuke not being good with girls XD. Though the biggest laugh from this definitely came when Yu just…stared at Yosuke. Even I would have been freaking out. Actually he was staring at the screen so maybe a few people actually did run XD! 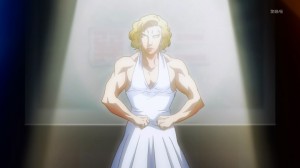 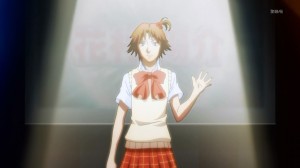 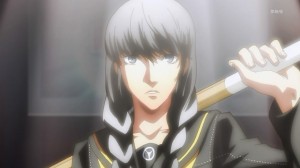 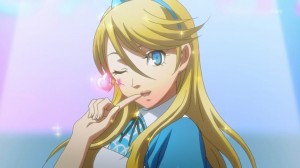 And then came the Cross Dressing Pageant. Pretty scary with Kanji and the Marilyn Monroe look they had going with him. The school girl Yosuke…ugh. This was less frightening in the game. So this is the legendary Yu with twintails and a bamboo sword. Finally gets a weapon in this! Of course Yu actually got the girls (and some guys) blushing with that look. Of course it was all a prelude to the ultimate winner. Nothing and no one could stand against the frightening power of Kuma. Completely blew the entire crowd away there. While this wasn’t my favorite part of the episode it was worth some laughs. The guys really put themselves into a rough spot with this. Think in the end the voting was probably almost entirely for Kuma, but with Yu coming in second. Pretty sure all the girls interested in him voted against the norm XD. 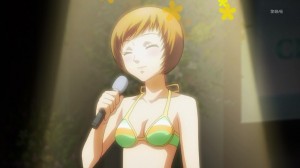 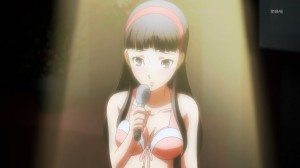 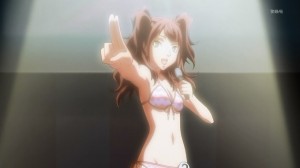 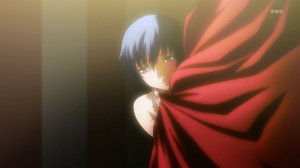 Then came the actual Beauty Contest. That actually lacked the creepiness of the cross dressing. I loved Yosuke calling Chie a liar, since she definitely prefers meat to pudding. Yukiko of course was shy up there which got her plenty of points anyways. I still agree with my feelings originally that Naoto winning is just odd. Yeah I get that the little peak was enough for Kanji, but come on. I’m pretty sure the game had multiple parts to the girls portion which at least helped it make a bit more sense than here. In this case I really don’t think a shy reaction where she didn’t even come out would be enough. Of course I guess the tipping point really was that the girls voted for Naoto. An idol probably doesn’t match up against someone who has the Trap card to play. When you look at it like that in both cases traps won the contest, though of course the guys contest was 100% trap. Regardless I don’t think someone’s head should be enough to make them win. 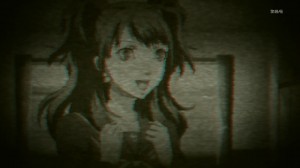 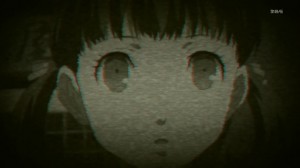 It wouldn’t be a Persona episode without an “I’m worried” message. It seems like they’ve got the Yukiko Inn episode coming up and that really can’t afford to be more than half the episode. We took care of the Sun arcana here, but there’s only so much time left. But anyways, I enjoyed the episode and hope for the best from the rest of the series.