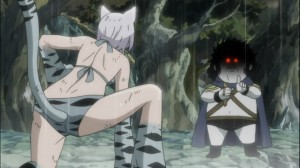 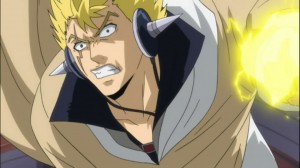 We’re approaching the tail end of the arc for sure, but things are continuing to heat up as we move into the conclusion to this arc. This week features the return to action for one of Fairy Tail’s most interesting antagonists, as well as a few other nice side battles and events to tie everything nicely together. 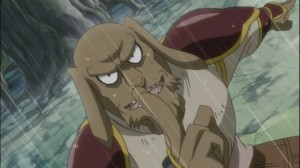 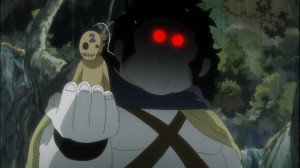 Before we get into the meat of the episode, I’d like to comment on my own issues with the last episode. I really wondered why a defense had been left in place at the camp, even though mostly everyone from Grimoire Heart had been defeated. This episode clearly answered my question, with the return of not only Hikaru, but Yomazu and Kawazu from the battle with Gajeel, from waaay back in episode 102. All in all, while I’m guessing the battles between the Fairy Tail Mages at the camp and the remaining Grimoire Heart were mostly filler, I really enjoyed these little mini battles.The great thing is that they were short enough to pad out the episode a bit, but not too long as to over stay their welcome.

The battle with Hikaru was as funny as the first one, with some little fanservice trickled in for good measure and an awesome combo attack: 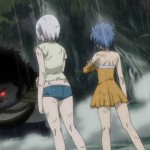 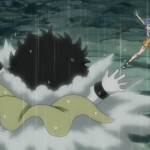 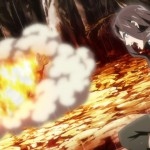 Meanwhile, it seems like the Freed and Bickslow versus Yomazu and Kawazu battle is going to continue next episode.

The main event of the episode, was definitely the battle between Laxus and Purehito. Now, I’ve said before that I’ve been fairly excited for the return of Laxus, but given his attitude, it could’ve gone either way. What rocked though? Was how much Laxus had grown and changed as a person. No longer was this the guy who had almost  wiped out Fairy Tail because of his obsession with strength. No, rather, Laxus here was arguing quite the opposite. Being the strongest doesn’t matter, but  standing up to the strong ones does. 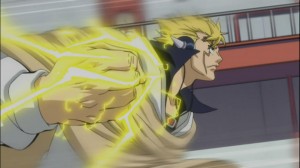 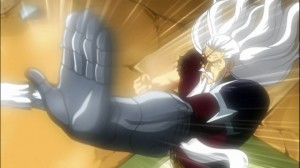 It was hard not to be won over by Laxus’s bravado. Not only was his whole “Its okay to get pissed off when your old man gets done in” stuff, but the fact that he over powered Purehito’s paralyzing spell with sheer power was just AMAZING. Added to that, I think that had Laxus wanted to, he would’ve faught and beat down Purehito, but he recognized that there was more at stake than that.

No, an outsider from the Guild could NOT come in and just save them.

This would mean that:

A.) The Fairy Tail name would be tranished and

B.) That they would always end up relying on him or Gildarts.

In order to truly grow Fairy Tail into a strong force, Laxus chose to power up Natsu and have a member of Fairy Tail take down Purehito. 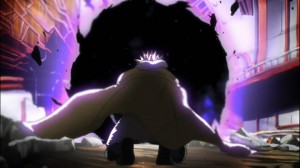 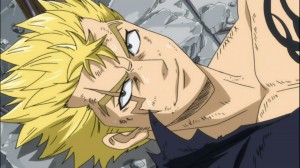 That whole act, the concept, and then taking the brunt of Purehito’s attack head on without any magic power, has instantly sky rocketed Laxus to epicly badass. And yes, Laxus was a villain in an earlier arc, but damn has the guy already grown into one hell of a cool guy with a real sense of how things should go. I am totally okay with him taking over Fairy Tail as the Guild master, and I’d be dissapointed if he doesn’t end up returning to Fairy Tail. 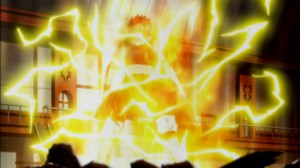 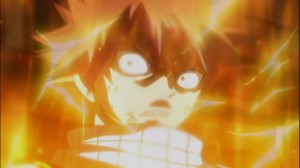 Once again, with Laxus, Hiro Mashima-san has shown that he knows how redeem characters, and really did redeem Laxus in my eyes.  Now, with Laxus’s selfless actions, we have a Thunder-Fire Dragon  Natsu ready to take on Purehito. Despite what everyone else in the ship is worried about, I don’t think Natsu is going to get sick again this time. Given that he already was able to absorb Zancrow’s powers by creating a second magic void in himself earlier, I’m sure Laxus’s power is going to fit in nicely as well.

The one thing I do wonder though, is from this screenshot: 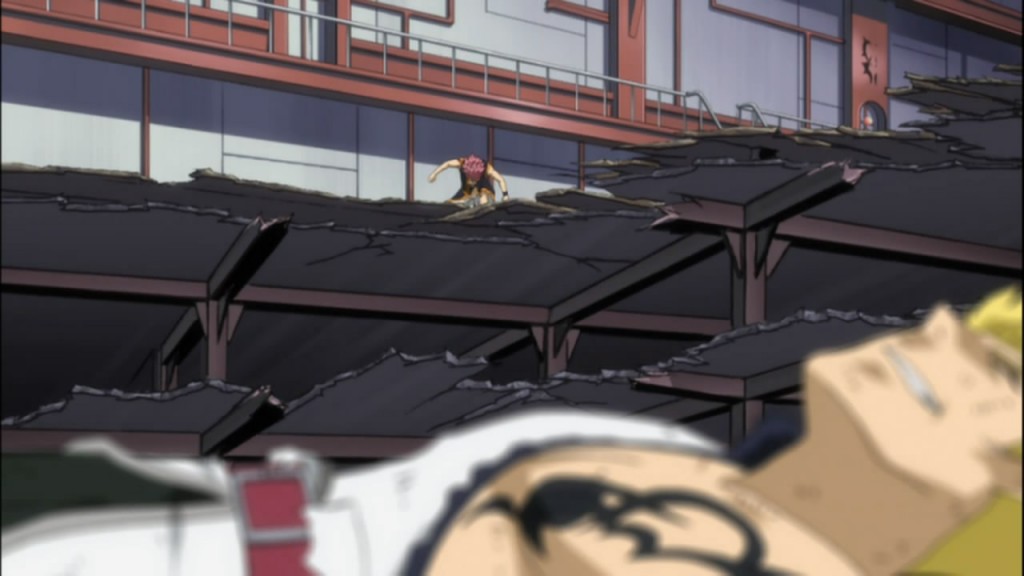 Some kind of Guild Mark?

Now granted, this could be just the Raijin Tribe Mark that’s still left on his body OR… OR! Laxus has already joined another Guild or perhaps.. formed his own? I’m not exactly sure how I feel about this…. 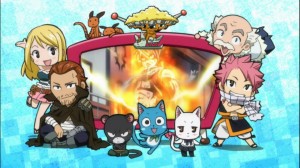 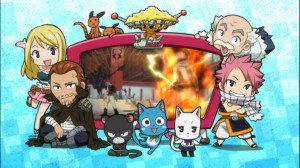 Next week, we get Electric Fire Dragon Natsu taking on Purehito! See ya next week! 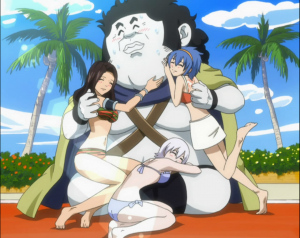 Hikaru in Heaven and Lisanna upside down for you guys! Enjoy!