You Should Be Watching: Aquarion EVOL

Here at Anime Evo, we are unfortunately not High school students, or people with a lot of free time on our hands. More often than not, we end up scrambling to just get our episode blog posts of the week in on time (occasionally failing pretty hard), and thus, the amount of series we can cover per season is fairly limited.

With that said, this Winter season in particular, has been one of surprising quality, going as far as to even own and pwn the previous Fall Season of 2010. There are a ton of good shows every season that simply don’t get noticed or the spot light because bloggers are either not blogging them, or there’s just too many shows out there.

To change that, we’re going to do these “You Should Be Watching” feature articles, where we recommend one overlooked and superbly awesome series every now and then. So without further ado, lets look at the most recent series that has probably been overlooked by many:

Aquarion EVOL is a series that really slipped past our radar when we were deciding on what we were going to blog this season. With many of the awesome fall series still going strong (Chihayafuru, Persona 4, Shakugan no Shana III e.t.c) and a slew of new and amazing series (Nisemonogatari, Natsume Yujinchou San) we totally missed out on what I believe is the Mecha anime of the season, and potentially the year! 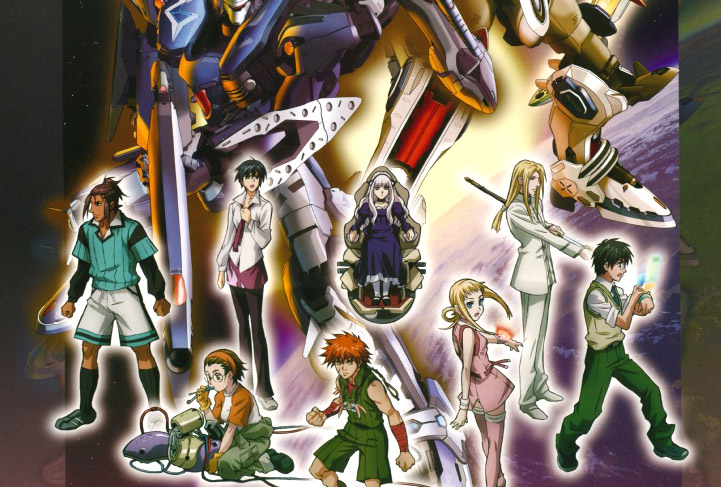 Aquarion EVOL is actually a sequel of sorts (Its set 1,200 years after the orignal) to 2005’s Sousei no Aquarion, a Mecha series filled with mythical elements such as reincarnation, Fall Angels and a lot of other cool stuff. 2005 was a looong time ago, nearly 7 years ago. To put things in prespective, its around the time D.Gray-Man started airing. Yeah, THAT long ago. What probably made Sousei no Aquarion so memorable was the fact that it was the last real mecha series of its kinda. And by that I mean that it was the last series that went along the lines of Evangelion and RahXephon. Namely, a series that involved heavy symbolism, relgious, mythical and philosphical elements.

It was after this that we got stuff like Eureka 7, Tengen Toppa Gurren Lagann and their insuing popularity put  the philsopicaly sci-fi mecha series out of popularity. Not only that, but series Like Gundam and Macross both began reinventing themselves to meld into the modern landscape where Mecha series  needed deep love triangles, and teenage high school style romance and slice of life elements.

Its safe to say that both Gunadm OO and Macross Frontier were extremely successful in their attempts. Now here to join them, with Macross Frontier’s very animation studio at the helm, we have a new incarnation of the Aquarion franchise. 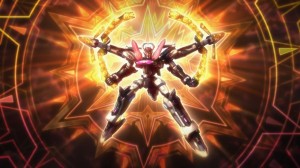 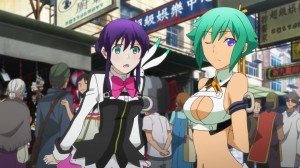 What really makes Aquarion EVOL so darn amazing, is the fact that it really does have something for everyone, given you’re into the mecha genre. Since its Statelight, we get the obligatory love triangle between series main character Amata Sora, and the two girls Zessica Wong and Mikuno. For fans of the old reincarnations and past lives love, there’s  a SECOND love triangle developing between the possible series antagonist Kagura, Amata and Mikuno. 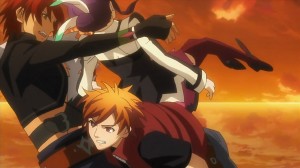 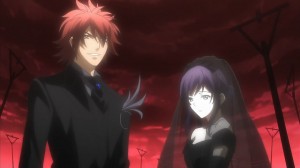 Added to that, the art direction, animation and action is just simply jaw dropping. If you’ve followed Satelight’s last mecha series, Macross Frontier, you’ll know that these guys are the absolute best at mecha series animation. They simply pull all the stops in Aquarion EVOL though. As of right now, we’re 7 episodes in and there has not even been a remote dip in quality. 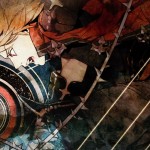 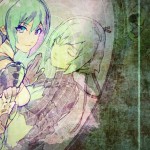 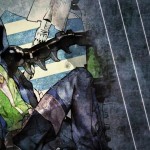 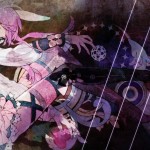 The character designs are breathtakingly unique, interesting and fresh. Everyone from the almost regular looking Amata Sora, to the punkish looking Andy, are enough to sell the series. Added in some breath taking backgrounds that truly bring this new incarnation of this world to life, and man… its just impressive.

Much like in Macross Frontier and Sousei no Aquarion, the music is just as impressive. Sousei no Aquarion was a classic mecha series in the sense that it reused a “theme song” of sorts for important moments, and Aquarion EVOL does that as well. Added to that though, it has some of the most impressive J-Rock/J-Pop songs that made Macross Frontier’s OST and the anime such a musical masterpeice. Its the best of both worlds, and that balancing act is something the series does so well in nearly every aspect. 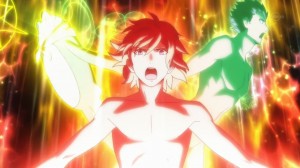 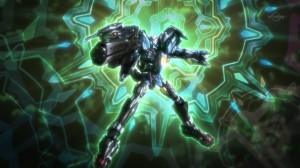 A new twist on union based Mecha Anime!

The focus on “unions” and the whole girls and boys being seperate but then coming together, is something many series have done. Hell, a series like Vandread and even Geneshaft were BASED on the concept of females and males being apart and then reconnecting. Aquarion even adds that to the mix, and puts a unique high school themed take on it. Solid stuff in the slice of life department right there, with some genre tropes kept in tact.

Its still early to say what will happen with this series, but starting from the series premier (which bundeled episodes 1 and 2) all the way to episode 7, Aquarion EVOL has been consistently delivering each week. If you are or have ever been a fan of Mecha anime, then this is one series you absolutely MUST see.

We here at Anime Evo, heartily recommend it!