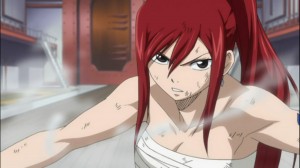 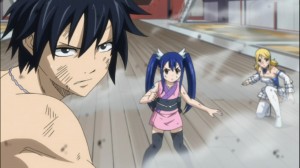 To the detractors who thought Fairy Tail couldn’t hold its own in the action department as far as Shounen series go, this episode gives you a major dose of AMAZINGLY well done action, and makes you think twice about every being negative about this epic series!

I think this episode will remain forever in my memory as the one with the coolest combo group attack in the series yet. 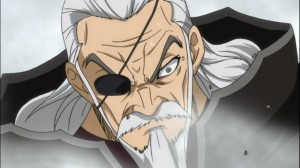 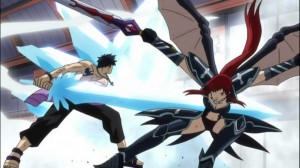 We had Erza, Wendy, Gray, Natsu and Lucy friggin dish out the ownage. That synchronised combo attack was just pure animation awesome, and was well worth whatever percentage of the budget the production team sank into it. 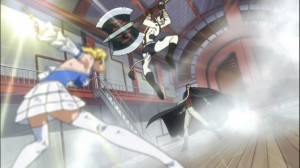 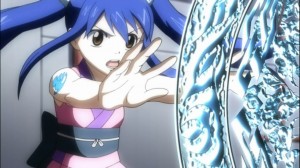 The Unison Raid between Wendy, Lucy and then Natsu hitchhiking a ride was just… Wow! I cannot even begin to state how sore my jaw is after that huge height of a drop. Just amazing, friggin amazing. 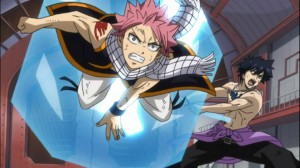 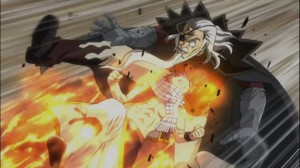 What is sad though, and I think at the same time great, is that Fairy Tail offers up its action in bit sized chunks. Unlike say Bleach or Dragon Ball Z, Fairy Tail is more or less about one episode, and sometimes half episode fight scenes, and little more, length wise. I enjoy the fact that Fairy Tail never loses sight of the fact that its essentially a story, not a glorified slug fest, but at the same time, this intense action really leaves me craving more.

Of course, its also because of how brief and quick the fights are that we get to see such glorious choreography in motion. I’m sure that this was done in the manga, but whoever choreographed this fight scene for the anime has just simply out done themselves!

So yes, now that I’ve gotten THAT out of my system, its worth talking about the rest of the episode. There were some interesting little bits of dialogue in between the fight scenes, and also some darn odd leaps of logic that required us viewers to suspend our disbelief.

So firstly, why in Heaven and Hell did Fairy Tail have to split up into two teams? The defence team was more or less unnecessary simply because everyone sans Hades/Purehito was down. The one exception could’ve been Zancrow, but Zeref made quick work of him. Therefore, it would have made a lot more sense for everyone, not just Lucy, Natsu and Wendy, to go and take on Purehito. Given that Purehito had already taken down friggin Makarov, the Guild Master, it was blatant stupidity to not go into the battle with nearly everything you had, and perhaps a bit extra.

Instead, we had Natsu, Lucy, Wendy and the three Exceeds go in, leaving both Freed and Bickslow to guard “the wounded”. This was, perhaps, a major misstep, especially given they themselves say that Hades is the only one left. It can probably be argued that some defense was necessary just in case, but then Freed and his runes would’ve probably been enough. The rest of them should’ve all gone. Especially since Purehito ended up dominating them so intensely near the end of the battle: 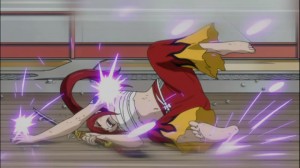 As they left to go to fight Hades, however, I think we saw a real turning point in the shipping wars of our main character Natsu. Its all but confirmed now that Natsu x Lucy is pretty much our cannon pairing, regardless of whether its developed or not.

The little chat Lisanna had with Lucy before she left, was pretty much an admission of Lisanna conceding to the fact that Lucy was more important to Natsu than her, regardless of whether she term it as “best friend” or not. All in all, I’d say its up to the characters and plot itself to work in any romantic elements. One criticism I have of Shounen series in general, is that they never tackle elements of romance properly, no matter how integral they are to the plot. 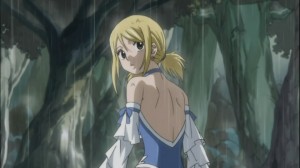 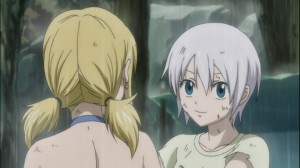 The only one that’s come decently close to it, has been Groove Adventure Rave, and lo and behold, same Mangaka that now makes Fairy Tail. I’m hopeful, that we will get some sort of resolution on the romance front for the series, at some point. For now, I’m happy seeing Natsu x Lucy being kind of acknowledged by the mangaka and Animation staff.

The other two major things, were Zeref and the little clash of ideologies between Makarov and Purehito’s Fairy Tail. 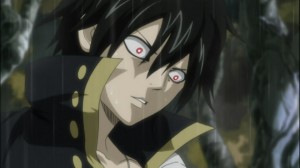 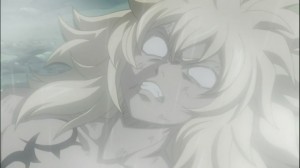 First Zeref, who seems to  have given up playing the emo black haired peace loving victim, and has started fully using his powers. We see him annihilate Zancrow and wow. He also mentions Acnologia, which scares the hell out of old Mest and the magic council soldiers, making them retreat and giving up on any chance of salvation. Whatever Zeref is planning on doing, its clear that he’s not content staying dormant any longer. I found his lamentation about Natsu not having destroyed him before the “times changed and he began to act” very interesting.

If one thing is for sure, its that Zeref and Natsu have a deep relationship, that will eventually pit them against one another. This relationship is probably going to be one of the series big secrets that we’ll learn at some much later point in the story.

The other thing, was what Purehito said about Makarov and the changes he brought to Fairy Tail. Its definitely interesting to see the reaction of the second Fairy Tail Guild master to how his guild has changed after his departure. So apparently Fairy Tail wasn’t as flamboyant and the huge attention grabber it is now in Purehito’s time.

I do agree that Makarov is definitely more like the sun, than Purehito, who’d kind of like an all engulfing darkness that acts in the shadows. Probably why it was pretty better for Fairy Tail that Makarov took over before Purehito went dark side.

Oh! And of course, I almost forgot. Friggin Laxus showed up at the end of the episode! 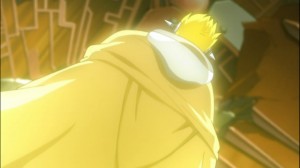 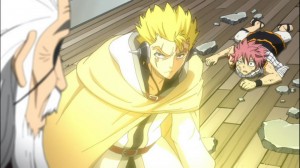 Was that not the friggin best thing ever? I’m sure there are tons of Laxus haters out there,  but I was personally thrilled to see the Spark man make his flashy return. I so totally look forward to seeing Makarov’s successor kick some serious Purehito butt! Not only that, but it was just epic to see Purehito look at Laxus and immediatly think of a younger Makarov. 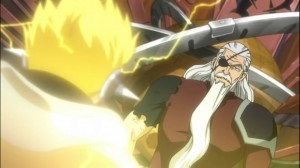 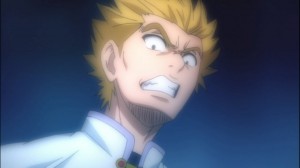 The next few episodes should have a major slug-a-thon between the Lightning Emperor and The 2nd Guild master of Fairy Tail!

So yes, amazing episode, best action scene in the entire series, and some awesome twists and character moments. My only regret is how late this review was, not doing justice to the intense excitement that this episode generated in not only me, but probably many Fairy Tail fans in general! 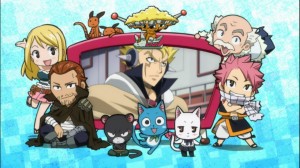 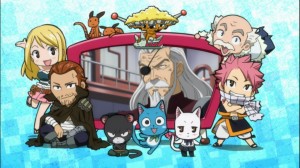 Next week, or rather, in about 4 days thanks how late the review was this week, we get the major battle between Laxus and Purehito! See ya all next episode!