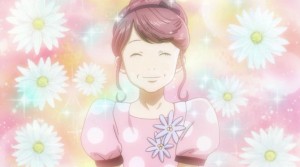 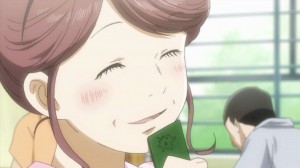 At the beginning of this week’s episode, we find out that a good chunk of time has passed and the gang is now attending their first big tournament as a group.  Everyone is getting prepared for the tournament by getting dressed in their hakama.  Kanade’s mom is smitten with Taichi, though she and Kanade quickly turn their attention to Komano when he mentions that he should learn how to wear a hakama so that he doesn’t have to always rely on them to help him him dressed.  Kanade and her mom are all too excited about this and bombard him with mentions of hakama-wearing classes and a line of cotton-blend hakamas that their family store have.  Meanwhile, Chihaya is trying to mentally prepare herself for her first big Class A tournament that isn’t limited to just high schoolers.  Taichi reminds everyone to take their games one card at a time, but as everyone files out of the door for their tournament, Chihaya lingers behind.  Kanade notices and asks Chihaya if she’s alright; Chihaya shakily tells Kanade that she feels like a rookie baseball player playing their first game in the major leagues.  While Kanade is surprised by the analogy, she understands Chihaya’s nervousness.  After a few encouraging words, Chihaya seems ready to face her first opponent.

As luck would have it, Chihaya’s first opponent is an older woman – probably in her late 30’s – who looks like she could be an easy match for Chihaya.  The woman compliments Chihaya on her hakama and laments the fact that she can’t wear such bright colored hakama anymore, but Chihaya thinks that the woman’s outfit is adorable and tells her so.  They don’t have much more time for chit-chat as the match is about to start.  Chihaya puts her game face on and as the first card is read, she strikes with the speed that we’re used to her seeing.  Unfortunately for Chihaya, the woman is able to get the correct card before she’s able to.  The woman smiles and comments on how she’s lucky that she’s playing against someone who only has speed going for them.  This seems to get to Chihaya, but she tries to ignore it and concentrate on the cards.  The rest of their match seems to continue in this pattern; Chihaya moves first but her opponent continually gets the cards.  Then the gentleman reading the cards reads six dead cards in a row and Chihaya is wound up so tightly that as soon as the next card is read, she goes for one even though it turns out to be another dead card.  She’s disappointed in herself when she realizes her mistake but her opponent just chuckles and says that she’s glad she was lucky enough to play against someone who has no real talent at karuta aside from speed.  Chihaya decides that instead of playing to win, she should really be watching her opponent and learning as much as she can.  In fact, she decides to scoot back from the playing field so that she can easily reach the furthest row of cards (her arms are long enough that when she’s right in front of the playing field, she can reach past the last row) and this surprises her opponent.  She then notices that her opponent breathes in time with the syllables being read on the cards, so she gives that a shot.  She’s able to reach the correct cards at the same time as her opponent, but the older woman takes the card and congratulates Chihaya on figuring out her three syllable breathing technique. 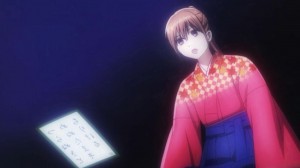 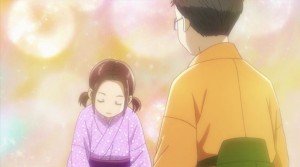 As the match goes on, Chihaya finally figures out what Dr. Harada had been trying to tell her before.  He was trying to tell her that she needs to focus more on the timing and position of the cards than her speed and that’s the only way that she’ll be able to compete against the Queen.  As expected, Chihaya loses the match but instead of feeling dejected, she takes it as a lesson in techniques to better her game.  Afterwards, she finds her opponent and thanks her for the match and for giving her a lot of information to think about.  The older woman laughs and says that her dream is still to become Queen, but even after playing karuta for over 30 years, she hasn’t given up on her dream.  She picks up her daughter and tells Chihaya that she’ll see her at the qualifying tournament.  Later that day, Chihaya enters the room to watch the final match for both Class B and Class D and is shocked to find that Taichi and Nishima are playing each other and Kanade and Komano are playing each other!  She’s unsure of who’s match to watch and is panicking when she spots Retro sitting beside her.  She asks him how his games were and he claws at the tatami, angrily saying that Taichi beat him in the first round.  Meanwhile, we see Taichi and Nishida glaring daggers at each other since it’s their last chance to advance to Class A for the qualification tournament.  Komano and Kanade are busy setting up their cards, though Komano is temporarily dazzled by how poised Kanade is in a hakama.  However, he focuses more on how well he knows her and how he’s going to win the match.  When the match starts, Chihaya is temporarily unsure of who to watch and isn’t sure what’s going on.  Then she notices Kanade’s posture and becomes intrigued.

Normally, Kanade sits on her heels because it’s hard for her to keep a position on her knees for the length of a game, but she seems able to do that no problem in her hakama.  We find out it’s because the obi helps suck in her tummy and stabilizes her back, which allows her to position herself the way she should during a game.  Chihaya becomes enthralled with Kanade and Komano’s game as Kanade effortlessly takes card after card from Komano.  Every time she ends up flinging a card near the crowd, she gracefully rises to her feet, picks up the card and bows to the people the card landed in front of her.  Everyone seems dazzled by Kanade’s grace and her mother acknowledges that while Chihaya looks good in pretty much anything she wears, Kanade is truly the poster child for kimono and hakama because she really knows how to wear them.  Unfortunately, Kanade’s streak is lost when Komano is able to take one of her favorite cards from her.  Komano reflects on how Kanade doesn’t just memorize the poems; she sees the connections between the authors of the poems and their history.  With this, he’s able to discern which card she’ll be going for next and he knows what card is her favorite to take (which ironically, is the one he just took from her).  Kanade manages to take the next card from Komano and places a strange card on Komano’s side.  As if fate would have it, that card is the same one that’s read next and she’s able to take it before Komano even has time to react.  Chihaya realizes that Kanade isn’t focusing so much on the card, but what the card stands for.  In this case, the cards’ poem talks about Mt. Fuji and Chihaya figures out that Kanade is able to actually see the mountain with her mind’s eye and go straight for that card.  Chihaya suddenly straightens up and mentally declares that instead of cheering them on, she’s going to try and take as much as she possibly can from them during their match.  Of course, the only person who’s really paying attention to the other match is Retro, so we don’t know how that’s going yet. 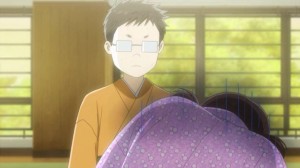 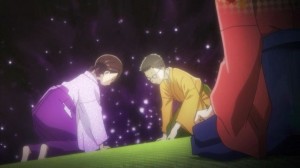 Opinions:  While there wasn’t a lot that happened in this week’s episode, we did see that Chihaya finally had a reality check.  She’s finally learning as much as she can from her opponents and other matches in order to better her own game, which is how a true pro acts.  While it sucks that she lost in the first round, I think it was for the best.  It really opened her eyes and I think she’ll be a better player because of it.  Seeing Komano and Kanade fighting for the tournament in Class D and Taichi and Nishida fighting for Class B was amusing, but it’s also really tense to watch.  However, I think that Chihaya will learn the most from watching Kanade and Komano play instead of Taichi and Nishida.  Not to say that the boys are bad players!  Kanade just has a better way of playing than the other two and it’ll be beneficial to Chihaya in the long run to pay attention to them.  However, I am curious to find out how Taichi and Nishida’s match is going…