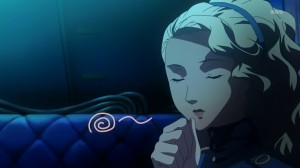 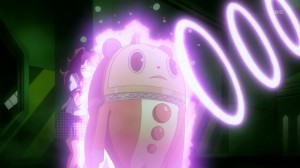 I’ll give Naoto’s shadow some credit for making this a pretty tough fight. You’d think it’d be pretty easy since their numbers are just reaching a great level to just overwhelm an opponent. But that aging ability really did have everyone running scared. Funny enough it really works for Naoto though since part of the issue was being seen as a child, so the ability to make someone grow older isn’t odd. Guess we’re lucky the shadow didn’t start using abilities related to sex change…

In one way it made some of the characters seem rather useless. I mean Chie and Yukiko spent the entire fight running or hiding and not actually helping fight. Yosuke was put out early and by the time he could fight again Yu was already pulling out the big guns to end the fight. Besides Yu the only characters that really took action was Kanji and Rise. Kanji of course was personally motivated to fight here by his obvious interest in Naoto. Now that she’s been revealed to be a girl his reactions have been even more obvious. Rise though was actually helpful in letting Yu take action against a tough opponent. Sure she was running around earlier, but once she had some cover she was in the fight. This episode showed how strong her persona is especially in tandem with Yu. She can predict what kind of attacks are coming and Yu can swap his persona to whatever is needed. Sure it didn’t completely work (due to Yu trying a death spell that trust me almost never works unless there is an element weakness…) but at least she was helping. 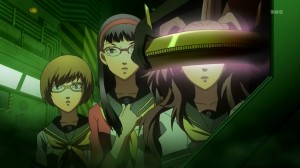 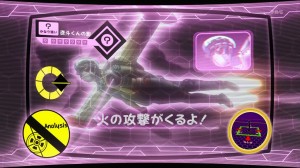 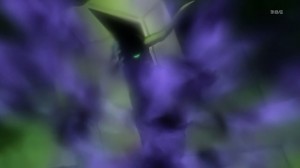 So we got to see a few interesting persona from Yu this time. Can’t say I loved all the choices since he could have picked some more interesting ones, but really at this point I barely care since the series seems to pick persona randomly. But holy crap for the Devil arcana he pulls out Beelzebub. We’re talking about the elite persona for that arcana, apparently he was really close to that nurse…That persona was just overkill for this dungeon, but not like the series worries about level concerns XD. Guess they picked that one to creep everyone out with a giant fly. I had no idea that Megidolaon was that insanely powerful. Guess there won’t be an option to come back to level up since they literally blew the base apart!

Naoto deserves a lot of credit in this episode though. Out of all the victims she brought the most information about the kind of person we are dealing with. Of course not saying anything bad about the others since Naoto actually expected to be attacked. It was part of her plan to find out if the real criminal is out there and if she couldn’t prevent being captured, then she could gather as much information as possible. She wasn’t in shock like some of the others and was probably focusing her mind to take in whatever details she could. But like anyone of course she was scared when being kidnapped. Just because the others had made it out alright didn’t mean she was guaranteed to survive. 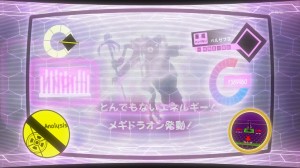 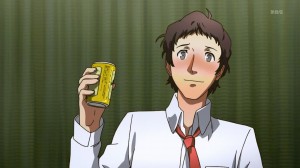 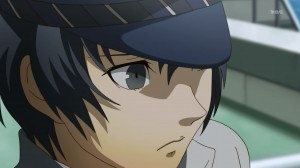 There was some key information gathered in by Naoto though. It certainly helps that they can be mostly certain the perpetrator is a guy and not working in some kind of group. Sure, there are a lot of guys in Inaba, but anything that can narrow their suspect list helps. The interesting part though was that the time between being captured and thrown into the TV was very short. It’s a strange thing since it’s not like there are a lot of TVs in the middle of the street and I doubt the perpetrator would be so bold as to wander around inside Naoto’s house looking for one. We also know that part of the reason that no one remembers anything was that they were drugged. Likely a rag doused in chloroform that would quickly bring down even someone physically fit like Kanji. All this information doesn’t tell them who did this, but it does give them a lot more information than they knew at the start. Now they have a good idea about how the victims are selected and captured.

Leave it to Naoto to suggest that they get physicals. It makes sense since who knows what kind of effect being in the fog and fighting with personas might have on them. The interesting part was Kuma though. There are never easy answers since the machinery couldn’t get a clear picture. Somehow I doubt it was mechanical failure either. The mystery surrounding Kuma is constant. A bit of fun when it came to Kuma trying to leak the physicals results. Interesting comment about Naoto who may have a more sizable bust than we realized (possible binding to help hide it). Rise of course wasn’t too bothered and I remember the game explanation being that her information was on her company’s website. Of course the other girls were a bit more upset about leaking that.

Adachi really has a loose mouth, but it does help say that Dojima does believe that this case isn’t over either. It shows how good a cop he is to not just jump all over this simple idea of blaming it all on Mitsuo. 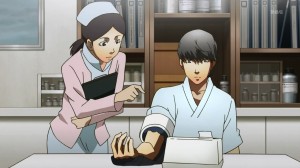 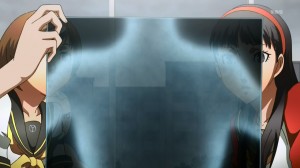 With only so many episodes left the series is likely going to keep the pedal down. I suspect we are done with social links and it’s going to be business from here on out. For those anime only watchers I hope you enjoy the rest of the show.
Score: A