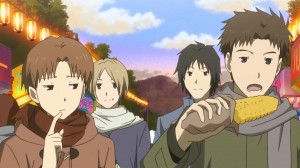 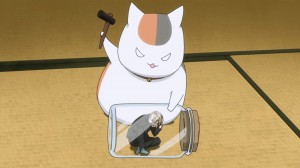 This was easily the funniest episode of Natsume that I can remember. The moment I thought about Nyanko transforming into Natsume the comedy just took care of itself. We already knew from earlier series that he could transform into people (found it interesting the first one he turned into was Reiko) and that ability returned in this episode. In that respect it makes you think about how powerful Nyanko truly is. He can take these forms that can interact with people easily. If he really cared to he could live as a fake human though really there isn’t any incentive for him to do that kind of thing. While Natsume’s reputation might not like it, Nyanko saved him from being reported as missing.

But really this episode was utterly hilarious. The posing was just funny on its own since you’d never see Natsume actually doing it himself. Sure, they did make sure to make Nyanko’s impersonation look a bit different so you could tell the difference, but it was still funny. In that sense it might help show how Nyanko views people and trying to act like one isn’t quite so simple. Going from in his mind a very powerful youkai to a regular human isn’t easy. Maybe the most fun was Natsume freaking out over everything that Nyanko was doing. The way he interacted at dinner was strange (wolfing the food down like he was starving), but I suppose Touko and Shigeru decided it was just some teen thing XD. 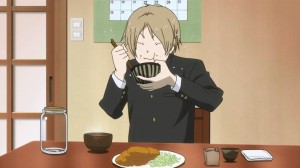 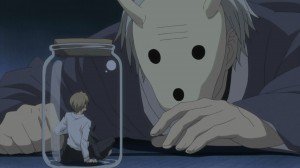 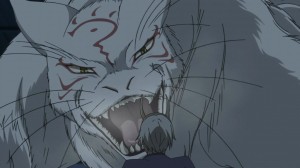 Perhaps the stuff that went on at the school was the best since Nyanko really created some chaos. First he terrified Nishimura who thought he was going to get attacked and then Kitamoto got a scare. I have no idea how Natsume will explain what happened to those two later. When I think about it Natsume was probably foolish to expect them to have any information since they didn’t seem that informed in the first place. Sasada of course got the greatest shock and Natsume’s reputation will take a hit since it really looked to everyone (including Sasada) that Natsume was about to confess. Of course personally I want him to get together eventually with Taki so whatever XD. Still it was worth some laughs to see Nyanko trying to stay calm and not yell at everyone. The best part was Nyanko saying Sasada smelled delicious which sent some pretty serious thoughts into her head…before his stomach growled. So now either Sasada thinks Natsume is a cannibal or crazy. How he’s going to fix things after the next episode is something I’m not sure about.

Was nice to see a re-appearance for Madara. Only for a short scene, but it did show how scary he can be. You mess with Natsume, you get the teeth. A funny kind of thing though when you compare how intimidating he is in that form with his usual Nyanko appearance. Just shows how much he cares though since if he actually cared about the Book of Friends it wouldn’t be hard for someone of his level to get it. 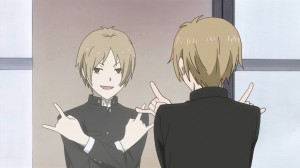 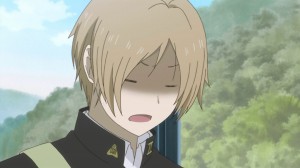 Of course this episode tied into Natsume’s connection to Tanuma. Natsume cares so much about his friends that he doesn’t want them involved when he’s in trouble. But that doesn’t stop him from getting involved with the troubles of others. All the episodes about his past though have at least helped us understand where Natsume is coming from. Compared to the past he is blessed to have so many that care about him. He doesn’t want to lose those people. The more they care the more he is afraid of losing them. But in this case Tanuma isn’t going to back down. Natsume’s an important friend and even if he can’t really see youkai he will try to help. Nyanko just went overboard though in playing around with Tanuma. I feel bad for Tanuma since of course he doesn’t know it’s Nyanko, but he does realize someone is impersonating Natsume. It’s actually too bad they couldn’t fit a Taki and Nyanko interaction since it might have been pretty hilarious as well. 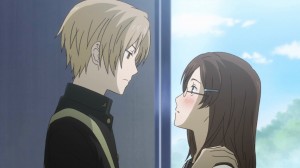 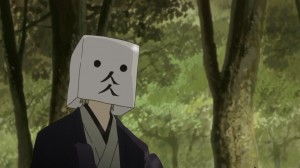 This was a nice start to another two-parter episode. I can’t wait to see how they get Natsume out of that bottle and the possible consequences for Natsume’s reputation at school XD.
Score: A+