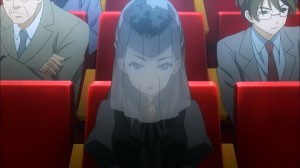 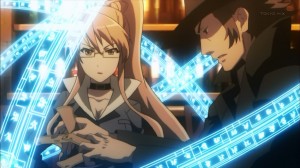 Well the ending of this episode had a kind of “oh crap” moment to it. An episode mostly focusing on Yuji’s perspective on this battle suddenly ends with a scene showing us how prepared Bal Maqué is. I didn’t expect they would have already set up shop in Misaki City with some of the most powerful enemies in the cities standing on the roof of the school. Certainly there was no way to prevent Yoshida from being taken even if she hadn’t agreed to go along with it.

Of course makes me think that Yoshida is utterly nuts. Seems she is more than willing to throw her life away if it’s for Yuji’s sake. And here I thought she was going to survive the series for a moment. Still suppose we need to hear exactly what Yuji wants Yoshida for. Could be something like Khamsin in the first season and needing her vision of the city, but could be they need a ‘blood sacrifice’ kind of thing to help make this new world possible. We will just have to see in the next episode. Suppose you have to give Yoshida credit going along with this considering Yuji has already chosen Shana. She’s putting her life on the line for someone who isn’t going to return those feelings. 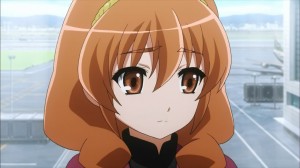 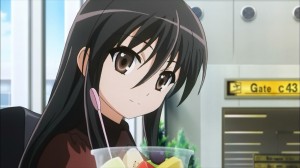 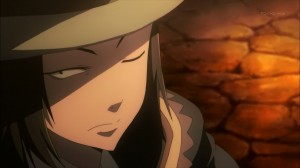 And finally we got some real insight on Yuji in his plan. Of course I don’t think it’s a bad idea to go against him, but at least he has some solid reasoning. Certainly he has this great goal and is hoping that it will all turn out alright. Seems to believe that Tomogara want to live alongside humans, possible though I think the first 2 seasons of the series has made that questionable. The only Tomogara we’ve seen living with a human was Pheles, I don’t think one good example is enough to base a whole plan on. Even Yuji recognizes that this plan is based on wishful think and leaps of faith. It could all go to hell, but he’s willing to take that risk. For his goal of living with those who are important to him he’s willing to potentially damn the future. He has obviously put a lot of planning into this. He’s worked to limit the deaths and protect the city that he has nicely thrown into the fire once again. At least it’s some comfort that the old Yuji is around somewhere. This kind of idealistic hope could only come from him.

On the other side you have the Flame Haze who aren’t willing to make such a large gamble. Putting uncountable lives on the line in the future just isn’t worth it. Plus not like they can put trust in a guy who mind raped Margery/Flame Haze army and then just let the slaughter continue. Luckily, it wasn’t very hard for Shana and company to gain the strength of the three remaining gods. The sacrifice of Centerhill was certainly important for making sure everyone would cooperate. The only question is if the group they have will be enough to win this war? Although in the end it simply comes down to whether Shana can stop Yuji or not. Both sides I’m sure will have trump cards to play as the series gets ready for the end.

The key really is who is right about how the Tomogara will behave in Xanadu? If Yuji is right it will be pretty peaceful and should work out fine. But if the Flame Haze are right it will be a nightmare of consumption leading to the eventual apocalypse for all the worlds. At least it’s nice how neither side is fully evil here. Easy enough to get fully behind Yuji and the Tomogara in this case. Of course I’ve found it rather easy to keep them as the group that must be stopped. Could simply argue that the only paradise that should be waiting for the Tomogara is at the end of a Flame Haze weapon. They’ve had their fun massacring and destroying lives and get rewarded with a paradise? Kind of funny how it was the death of Hirai Yukari that started so much and yet Yuji sides with the ones who stole that life away. 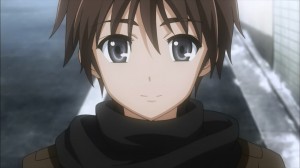 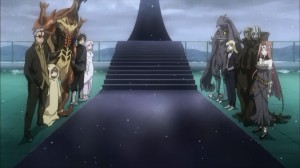 Time for the final battle. No idea what kind of role Yoshida will play or what Pheles is up to, but I’m sure we are going to find out. It’s going to be a crazy battle that’s for sure. No doubt I’m fully behind Shana’s group in this. Nice that its possible to side with either and have some reasons for it. Time to see who’s vision of the future will win out.
Score: A-