Considering episode 16 was basically a massive recap episode of everything that’s happened up until this point in the series, I don’t really feel like there’s a need to cover it.  The few things we we learned included the fact that everyone (including Chihaya) thinks Kanade is the most dateable out of the five of them, Nishida sister makes his shirts (she has a hobby making screen prints) and that Chihaya’s older sister is a massive bitch.  Everyone good?  Okay, moving on to episode 17! 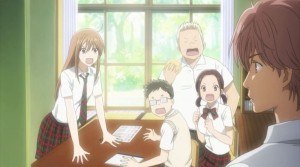 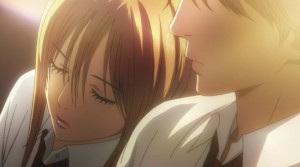 Episode 17 starts off with everyone resuming school after summer break and it’s the final event of the school-wide athletics festival.  The final event is the relay race and surprisingly, the karuta club managed to sneak in at sixth place over all.  Thanks to Chihaya’s track team coaching in middle school, she’s easily able to take the lead in the match and passes their baton (a karuta card) off to Taichi and they remain in the lead.  Kanade and Komano aren’t quit as fast as the others, but Nishida somehow manages to make up for their lack of speed and wins the race!  The back of their shirts read “recruiting new members” and it seems as though their strategy may actually work.  Or not.  Fast forward a couple of weeks and we see Chihaya lying on the tatami in defeat because no one else has decided to join their club.  Kanade scolds her for lying on the floor (apparently it isn’t lady-like) and tries to reassure Chihaya by saying that a lot of people showed up to watch them, but decided it was too hard to play so they left.  Taichi arrives and informs everyone that they’ll need to up their practice schedule if they want to compete at nationals the next year.  He then shows them a list of different tournaments throughout the year and fills them in on his plan; he and Nishida are going to be competing to try and make it to Class A before the regional qualifications for who is allowed to challenge the existing Meiji and Queen, Chihaya needs to get in more practice in order to challenge the Queen and Komano and Kanade are simply going to be getting a few more wins under their belts.  His phone starts ringing, so he excuses himself from the room to take his call.  Everyone is doing their own thing until they hear him say “let’s break up” and that’s when they lose it.  No one except for Chihaya even knew that Taichi had a girlfriend and it seems as though Chihaya had completely forgotten about it.  Taichi doesn’t seem bothered by the breakup at all though and just wants to get down to business.

After the initial round of practice matches, Chihaya tells Kanade to work on doing crunches and back extensions since it will help her build muscle, which will in turn help her be able to move for cards better.  Kanade admits that she’s been trying to do that, but it hasn’t been helping her much.  Chihaya encourages her to keep trying, but while the two girls are talking, Komano starts reflecting on how he’s much smaller than both Taichi and Nishida and even though they trained a lot during the summer, he hasn’t been able to put on much muscle.  Kanade seems to notice that he’s feeling a bit down and challenges him to a match; Komano happily accepts.  On the way home that day, Taichi and Chihaya take the train together and all the while, Chihaya is practicing her swing to make it faster.  Taichi helps somehow by clapping is hands; whenever he claps his hands, she has to swing.  I’m assuming it’s in order help hone her reaction time.  Taichi points out that it’s kind of ridiculous and people are giving them strange looks, but Chihaya doesn’t seem to care about anything other than getting better at her game.  Once on the train, Taichi mentions to Chihaya that he plans on going to a tournament near Fukui and invites her to come along with him.  She hastily agrees, but then becomes nervous when she asks him how much the trip would cost.  I don’t remember how much it was, but it was enough to send Chihaya into a panic attack and have to decline Taichi’s offer, even though it pained her to do so.  As per usual, Chihaya suddenly falls asleep and leans on Taichi’s shoulder.  Taichi sits there for a moment, but hesitantly looks as though he’s about to hold her hand…but then he claps his hands instead, which wakes up Chihaya and she automatically swings.  He laughs at her, saying that her reaction time – even while asleep – is impressive, but internally he’s chiding himself for sneaking around and trying to get ahead of everyone else by attending tournaments no one else can afford as well as for trying to take a secret trip with Chihaya. 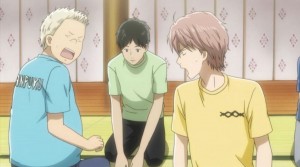 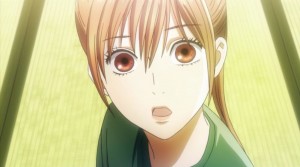 Fast forward a few days and Taichi is at the tournament near Fukui.  As everyone thanks their opponents for the game, Taichi hear’s a familiar voice and looks over his shoulder only to find Nishida there too!  The two quietly argue with one another about how they’re sneaking off to play in tournaments; Nishida says he was invited by one of his senpais, so he calls dibs on the title at the tournament.  Taichi doesn’t seem like he’s going to be letting it go easily, but once the match starts, he’s pretty much overpowered by his opponent’s speed.  While Taichi and Nishida are playing in the tournament, Chihaya is busy practicing at the recreation club near her home.  Dr. Harada and one of his fellow members are watching her game and both of them notice how fast Chihaya has gotten since she faced the Queen, but it doesn’t seem to help the fact that she routinely commits faults.  After her match, Dr. Harada walks over to her and tells her that she needs to stop playing with her speed.  This shocks everyone, since that’s all Chihaya really has going for her, but I think Chihaya is affected by it the most.  After the weekend is over, everyone returns to school and we see Chihaya curled up in the corner of the club’s room, deep in thought, while Taichi and Nishida are lamenting over the fact that neither of them were able to win the tournament they attended.  Komano and Kanade seem more worried about Chihaya since they’ve never seen her so deep in thought before.  After some badgering, she tells them all what happened and how Dr. Harada said that she needs to stop playing with her speed.  We get a minor flashback to when he told her so, where he explains that even though she’s incredibly fast at taking cards, she’s relying on her speed too much.  Basically, she needs to slow down and learn to really learn where the cards are before she can take on the Queen and actually be a contender in the tournaments.

Everyone seems to think that this makes sense, so they end up pairing off and starting another practice round.  When the first card is read, Chihaya snatches it from Komano and both Taichi and Nishida scold her for being too quick.  Chihaya says that she can’t really control it and it seems like her body just moves on its own.  Once the match has concluded, Chihaya feels like she didn’t do too poorly since she won by 15 cards.  However, Komano is able to tell her exactly where she’s doing poorly.  Turns out, he’s mapped out everyone’s strong and weak spots according to a square-grid; Chihaya is incredibly strong with one-syllable cards that are placed on her right-hand side and her opponent’s right-hand side, but does poorly on the other two sections.  Because of this, Komano is able to figure out that if he puts more three-syllable cards in her weak areas, he’ll be able to take more cards from her.  Chihaya is amazed by this, as are the rest of the club members and everyone begs Komano to tell them where their weak points are.  Kanade pipes up and asks Chihaya that she’s correct when she remembers Chihaya saying that the “chihayafuru” card appears red to her.  Chihaya says it’s true, and Kanade reminds everyone that karuta is still an art.  She goes on to explain the meanings and differences between two cards that no one can really tell the difference between.  Because of this, Chihaya is encouraged to start researching into the deeper meanings of the cards.  In fact, the next day, their teacher goes to remind Chihaya that their work placement forms are due at the end of the week, but Chihaya is so enthralled in a book titled “The Meaning of 100 Poets” that the teacher is somewhat impressed and leaves her be. 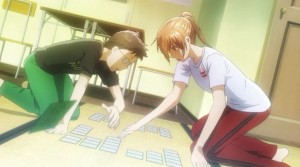 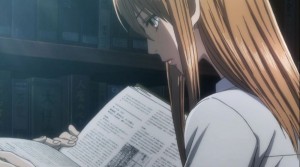 Opinions:  While episode 16 was just a major recap episode, it was still nice to be remind of everything that’s happened so far.  However, I don’t think I’ll actually score it.  Episode 17 on the other hand, was great in terms of pace and plot development.  Everyone is working really hard to prepare for the qualifications to compete with the Queen and/or Meiji.  Seeing Komano’s ability to figure out where everyone’s weak spots are, simply by playing them, was really cool to see too.  All in all, I think everyone’s progressing really well so far, though I wonder how Chihaya is going to do when she can’t rely on her own speed.  It’ll be interesting, that’s for sure.